The launch of a Soyuz 2-1B from the Plesetsk Cosmodrome – lofting another Russian GLONASS -M satellite – caught the crew of the International Space Station (ISS) by surprise this weekend, as European astronaut Alexander Gerst grabbed his camera and took photos of the satellite ascending during powered flight.

The Russian GLONASS Global Navigation Satellite System – operated by the Russian Aerospace Defence Forces – is the only alternative to the US GPS fleet in operation that has global coverage of comparable precision.

The Russians are continually launching GLONASS satellites, with varying success. Three GLONASS-M birds were set to join the constellation last year, but were lost when their Proton-M launch vehicle dramatically failed during launch.

Saturday’s launch of another GLONASS-M went to plan, however. With the satellite – designated number 55 – lofted uphill by the Soyuz 2-1B and its Fregate Upper Stage.

“According to the telemetry received from Glonass-M N55, the satellite is in good health, all its mechanical subsystems have deployed normally, Sun and Earth acquisition have been performed as designed,” noted a post launch release from ISS Reshetnev. 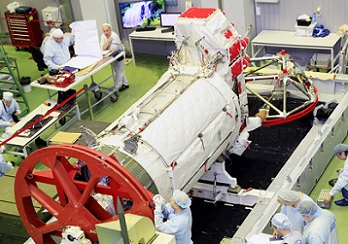 The company – which provide GLONASS’ launch and satellite services – went on to note this latest satellite is also providing some experimental testing of a new frequency band.

“Glonass-M 55 was put into the third orbital plane to provide positioning services from its orbital slot N21. The Glonass-M N55 satellite is equipped with the experimental payload capable of transmitting signals in the L3 frequency band.

“The experiment will include flight testing of the new equipment and evaluation of the accuracy characteristics.” 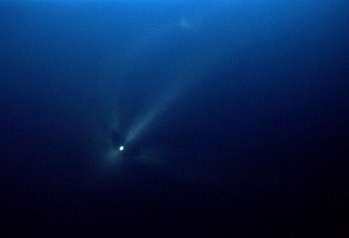 The launch uphill was also spotted by the crew of the ISS, as the mission proceeded towards its 12,000 mile destination. The entire ascent phase required three burns of the Fregate, resulting in a 3.5 hour mission.

“Looks like something launched into space yesterday over Russia, possibly a GLONASS Sat from Plesetsk,” noted Gerst on Sunday from the orbital outpost.

“Spooky in a way, brilliant in view but without the slightest sound.”

“Glad it didn’t come much closer,” he joked.

It’s not the first time a satellite launch has been spotted by the ISS crew, not least when a large set of photos were sent down to the ground last year – showing a spectacular view of a Russian Topol/SS-25 missile that was launched by the Russian military.

The rocket was launched from Kapustin Yar with a target of passing over the Sary Shagan test site in Kazakhstan. The missile has a range of nearly 7,000 miles.

The hi-res images (a huge set available in L2 – from which the .gif was created) were captured from the ISS by Luca Parmitano and fellow Expedition 37 crewmember Mike Hopkins.

The launch gained a similar twitter reaction to that of Gerst.

“Saw something launch into space today,” tweeted Hopkins. “Not sure what it was but the cloud it left behind was pretty amazing.”