NASA’s Orbiting Carbon Observatory completed its ride to orbit on Wednesday morning, launched atop a United Launch Alliance Delta II rocket, following a 24 hour scrub turnaround. Liftoff from the Vandenberg Air Force Base in California was on scheduled at 02:56 local time, following the replacement of a defective solenoid valve that prevented water flow into the sound suppression system that caused the scrub seconds ahead of launch on Tuesday.

Orbiting Carbon Observatory 2, or OCO-2, is a near-identical replacement for its ill-fated predecessor. Constructed by Orbital Sciences Corporation around the LEOStar-2 bus, the satellite has a mass of 454 kilograms (999 lb). Of this mass, 45 kilograms (99 lb) is propellant.

The satellite is designed for a two-year mission, however NASA hope to be able to operate it for longer.

The shape of the spacecraft is a hexagonal prism, measuring 1 metre (3 feet) wide by 2 metres (7 feet) long. Its attitude control system provides three-axis control while a pair of solar panels will be used to generate electricity to power the spacecraft.

Destined for a sun-synchronous orbit, OCO-2 will join the A-Train, or Afternoon Train, a constellation of Earth-observing satellites which fly in formation to compliment each other’s observations. The “Train” consists of the Aqua, Aura, CALIPSO, CloudSat and Shizuku (GCOM-W1) satellites.

The primary objective of the OCO-2 mission is to study the absorption of sunlight by carbon dioxide atoms in the atmosphere. To this end, the satellite is equipped with a single scientific instrument which will use three spectrometers to study the near-infrared spectra of light reflected from the surface of the Earth.

Absorption lines in the spectral images produced by the instrument can be used to determine areas of carbon dioxide and molecular oxygen in the regions studied.

Each of the three spectrometers is optimised for a particular wavelength of light. One will observe a region around 2.06 micrometres (microns) for a strong absorption band associated with atmospheric carbon dioxide.

The second will study a region of the spectrum around 1.61 micrometres in order to search for a weaker absorption band associated with carbon dioxide sources near the surface.

The third spectrometer is keyed to a wavelength of 0.765 micrometres, looking for absorption due to oxygen molecules which will be used to calibrate the results for the carbon dioxide data.

The original Orbiting Carbon Observatory was launched by Orbital Sciences in February 2009, using a Taurus-XL rocket.

The launch proceeded normally until the payload fairing was scheduled to separate from around the satellite, however this failed to take place.

As a result, the rocket was left too heavy to achieve orbit under its own power and it reentered over the Antarctic. It was the first major NASA mission to be lost at launch since the High Energy Transient Explorer in 1996.

The OCO-2 satellite was originally manifested to fly atop a Taurus rocket, in the same configuration that its predecessor had used. Orbital Sciences attempted to resolve the issue which had led to the loss of OCO, and in March 2011 the rocket carried NASA’s Glory satellite on its return-to-flight mission.

After that launch befell the same fairing anomaly which OCO had suffered, NASA lost confidence in the Taurus requiring that it be recertified before entrusting further payloads to it.

The Taurus has not flown since the Glory failure. Now renamed Minotaur-C and featuring common avionics with the Minotaur family of rockets, it is next scheduled to fly in 2015 carrying six Earth observation spacecraft for Skybox Imaging. 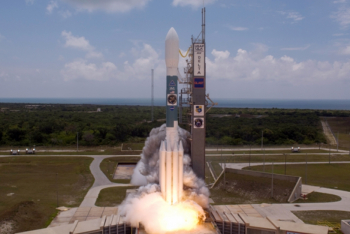 The launch was a rare outing for a rocket which was once the workhorse of America’s space program.

During the 1990s and 2000s it supported the deployment and replenishment of the US Air Force’s Global Positioning System in addition to commercial missions with communications and imaging satellites, carrying other military payloads, and deploying NASA missions to study the Earth, the Solar System and the universe in general.

The maiden flight of the Delta II, in February 1989, carried the first operational satellite for the US Air Force’s Global Positioning System. 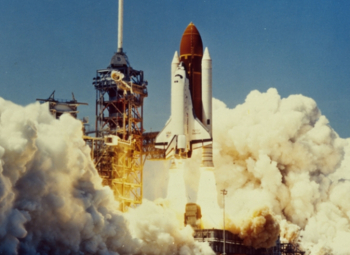 GPS satellites had been designed for deployment by the Space Shuttle, however following the loss of Challenger in 1986 many unmanned payloads were reassigned to expendable launch vehicles (ELVs).

At the time most of the US Air Force’s ELVs were being phased out in favour of the Shuttle so a series of programs were initiated to replace them.

The Delta family of rockets was one of the oldest lines in service, deriving from the Thor missile which first flew in January 1957.

At the time of the Challenger accident only six remained to be launched with no replacement planned. At the time it was believed that the future of orbital launches belonged to reusable rockets.

To fill the gap between the end of these launches and the introduction of a long-term expendable replacement, three more Deltas were assembled from spare parts – forming the 4000 and 5000 series. An interim series of new Deltas, the 6000, was instigated and designated the first member of a new type, the Delta II.

In November 1990 the 7000-series Delta II made its first flight and began to replace the interim configurations. The 6000-series was retired in 1992 after seventeen launches, all but three of which occurred before the 7000’s introduction. The launch will, overall be the 152nd launch of the Delta II and the 129th flight for the 7000-series configuration, not including the six Delta II Heavy missions.

The rocket to be used for the launch was originally to have been built as a Delta II Heavy, but was converted to a standard Delta II configuration to meet payload and launch site requirements.

For Delta II rockets the four digit number after the rocket’s name denotes the configuration it will fly in; for the launch it is a Delta II 7320. The first digit gives the type of first stage and booster rockets being employed, in this case an Extra-Extended Long Tank Thor augmented by GEM-40 strap-on motors.

The only exception to this is the Delta II Heavy, or 7920H/7925H which appends an H to the designation to indicate the use of GEM-46 solids rather than the GEM-40s which would other be used by a 7000-series rocket. This was done because the at the time of the Heavy’s introduction the 8000 series had already been assigned to the Delta III.

The Delta II Heavy required modifications to the launch pad, and as such was only able to launch from Space Launch Complex 17B at Cape Canaveral. It was retired in September 2011 with the launch of the GRAIL mission to the Moon.

The payload fairing which encapsulates the OCO-2 satellite was a three-metre (10-foot) composite structure. The largest fairing used by the Delta II, its presence is denoted by adding “-10C” to the rocket’s configuration, meaning the full classification of Delta 367 is a Delta II 7320-10C.

The four-digit designation system was introduced in the early 1970s to replace a designation system based around changing the letter after the rocket’s name each time the configuration was changed. Already up to the Delta-N, NASA chose a more sustainable system for future rockets.

The concept has since been copied by several other rockets, including Orbital Sciences’ Taurus, United Launch Alliance’s Atlas V and Japan’s H-II family.

The rocket that launched OCO-2 was Delta 367. Its first stage, the Extra-Extended Long Tank Thor, was powered by a single RS-27A engine with two vernier motors to provide roll control. It uses RP-1 propellant with liquid oxygen as an oxidiser.

Ignition of the RS-27 occurred three seconds before the planned launch. At T-0, the three solid rocket motors ignited and Delta 367 began its ascent towards space. The rocket reached the speed of sound, Mach 1, in 35.7 seconds, passing through the area of maximum dynamic pressure – Max-Q – fourteen seconds later.

A minute and four seconds into its flight, the Delta’s solid rocket motors burned out, having consumed their supply of propellant. Separation of the spent boosters did not occur for another thirty five seconds as the rocket first needed to clear an offshore oil field in order to ensure the jettisoned SRMs do not fall on the oil rigs located there.

The second stage of Delta 367 is a Delta-K, which is powered by an AJ10-118K engine, burning Aerozine-50 propellant oxidised by dinitrogen tetroxide. The stage can be restarted, allowing multiple burns to ensure accurate orbital insertion.

On this mission two burns were conducted prior to spacecraft separation. The first lasted five minutes and 42.8 seconds, before a fifty-minute and 28.5 second coast phase began. Separation of the payload fairing occurred 23.3 seconds into the first burn.

It will be inclined at 98.2 degrees, with a semimajor axis of 7,071 kilometres (4,394 miles, 3818 nautical miles), eccentricity of 0.0013 and an argument of perigee of 69.1 degrees. Spacecraft separation took place over the Indian Ocean off the East coast of Africa and close to the equator, at fifty-six minutes and fifteen seconds mission elapsed time; five minutes and 12.6 seconds after the end of powered flight.

Following spacecraft separation, the upper stage will perform two further burns to remove itself from the spacecraft’s operational orbit. The first of these will begin twenty eight and three-quarter minutes after separation and last 38.5 seconds.

The launch took place from Space Launch Complex 2 West (SLC-2W) at the Vandenberg Air Force Base in California. Built in the late 1950s, SLC-2W was originally part of the much larger Launch Complex 75.

The first launch from the pad took place in September 1957, with the Royal Air Force test-firing a DM-18A Thor missile as part of a joint trials and training program. The pad was first used for an orbital launch three years later, with a Thor-Agena carrying a KH-4 reconnaissance satellite into orbit.

When Launch Complex 75 was split up, Space Launch Complex 2 became a two-pad complex consisting of pads 2W and 2E, both used primarily by Thor-Agena vehicles. The first Delta launch from Vandenberg took place in October 1966 with a Delta-E orbiting the ESSA-3 weather satellite from SLC-2E. Coincidentally it was the first launch from SLC-2 after its redesignation.

Space Launch Complex 2E was decommissioned following the launch of the TD-1A satellite by a Delta-N in 1972.

In March 1984 a Delta 3920 made what was expected to be the last launch from SLC-2W when it orbited Landsat 5, however the complex was subsequently renovated for the launch of NASA’s Cosmic Background Explorer atop the one-off Delta 5920-8 configuration D189 in 1989. The first Delta II launch from the pad took place in November 1995.

The launch was the tenth of the year for the United States, and the seventh for United Launch Alliance. ULA’s next mission is scheduled for 23 July, with a Delta IV slated to place two GSSAP space surveillance satellites into orbit. An Atlas V launch is also scheduled for the end of the month, deploying the GPS IIF-7 satellite.

The Delta II will next fly in November, carrying the SMAP satellite for NASA. Beyond that, two more Delta II launches are planned for June 2017 and sometime in 2018, with the JPSS-1 and IceSat-2 satellites. One more Delta II remains unsold and available for purchase, although production of the venerable rocket has now come to a close.