One of two UK satellites that rode to space on a Russian Soyuz 2-1B rocket earlier this month – the innovative TechDemoSat-1 – has passed its Launch and Early Operations Phase (LEOP) milestone on orbit. Marking the success, Surrey Satellite Technology Ltd (SSTL) released a “selfie” the satellite took to celebrate its arrival in space.

The TechDemoSat-1 – part-funded through the Technology Strategy Board (TSB) and South East England Development Agency (SEEDA) – will enable UK industry and academia to qualify onboard payloads and UK satellite software, thereby overcoming the problem of a lack of in orbit flight heritage that often becomes a major barrier to commercial success in the space industry.

At around one meter cubed and a mass of around 150kg, TechDemoSat (TDS-1) is hosting no less than eight payloads plus a mixture of heritage and new product development systems from SSTL.

It is hoped that successful demonstration of the satellites payloads, in operational conditions, will provide the springboard for future technology contracts for UK industry and research partners.

The satellite rode uphill on a Russian Soyuz 2-1B launch vehicle earlier this month, as a passenger alongside the primary payload – Russia’s Meteor M2 spacecraft – and a number of companions, including Scotland’s first satellite, UKube-1.

Despite TechDemoSat-1’s rather amusing “sad face” – as depicted in pre-launch graphics of the satellite – the successful ride uphill resulted in the spacecraft taking a “selfie” of part of its hardware, with the Earth in the background. 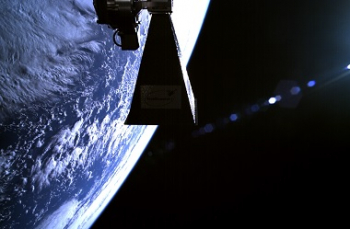 The image was taken minutes after separation of the satellite from the Soyuz and shows a view of the Earth from space, with the spacecraft’s Antenna Pointing Mechanism in shot.

“The inspection camera which took the image is mounted on the exterior of the spacecraft, and will monitor the behaviour of key mechanical payloads,” noted SSTL.

“It was manufactured by SSTL’s optics experts from COTS (Commercial-Off-The-Shelf) technologies and combines a colour CMOS camera with a high performance machine vision lens.

“The camera system was optimised to give a depth of field capable of delivering an in-focus image of the Antenna Pointing Mechanism and also the Earth in the background.”

The release of the image related to the completion of the LEOP phase, that began immediately after its successful launch.

The LEOP phase is the first part of the in-orbit commissioning process for the satellite – a managed series of tests and operations to check out the functionality of the key operating systems, such as power, communications, propulsion, attitude control and on board computing. 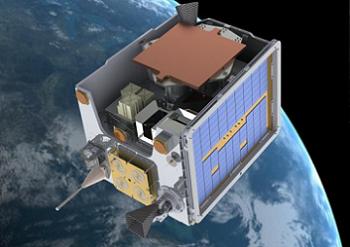 The satellite is based on the SSTL-150 heritage satellite platform, developed for the Rapid Eye mission (built under contract to MacDonald Dettwiler Associates), the platform has been modified to carry its cargo of eight experimental payloads. TDS-1 will provide on orbit testing of the new SSTL subsystem designs.

The payloads include SSTL’s Sea State Payload (SSP) that will demonstrate how GPS signals reflected off the ocean’s surface can be used to determine ocean roughness and help maritime shipping plan more efficient routes.

MuREM, a miniature radiation environment and effects monitor, was supplied by the Surrey Space Centre, while the Charged Particle Spectrometer (ChaPS) – a radiation detector that can perform simultaneous electron-ion detection – was developed by the Mullard Space Science Laboratory (MSSL). 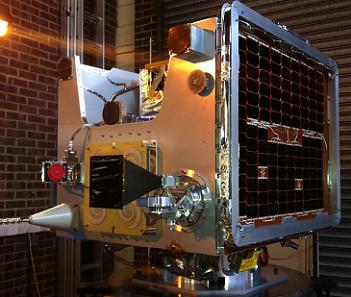 Also onboard the spacecraft is the Langton Ultimate Cosmic ray Intensity Detector (LUCID), a detector that can characterise the energy, type, intensity and directionality of high energy particles. This was developed by the Langton Star Centre, part of a sixth form college, and is an element of a broader outreach activity supported by the industrial partners.

SSBV’s CubeSAT ACS payload, is providing 3-axes attitude determination and control, while a de-orbit sail, designed by Cranfield University, will be the last payload to be operated on TDS-1. 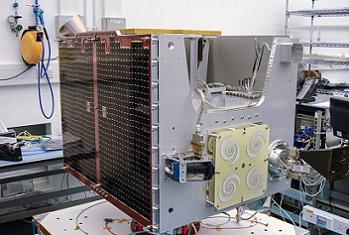 While it is hoped a successful mission will lead to an ongoing program, the satellite itself will be able to bid farewell via its own self destruction technique via the de-orbit sail that would be deployed from the satellite to force it out of the sky to burn up on entry interface.

According to SSTL – who continue to be a trailblazer for the UK’s growing influence in the space industry – an enhanced on board computer will provide greater ability to conduct software experiments remotely, while TDS-1 is sporting a new battery charge regulator and newly qualified cell types on two of the solar panels.

The propulsion system will utilize a smaller tank size, trialled with a new high performance resistojet thruster along with new sun sensors in the Altitude and Orbital Control System (AOCS), adding increased accuracy to the previous sensors used.