An Ariane 5 ECA has successfully launched two telecommunication satellites on Thursday. Optus 10 and MEASAT-3b both rode uphill on the Arianespace workhorse out of the European Spaceport in Kourou, French Guiana, following lift off late in the launch window – due to two technical holds – at 22:05 GMT.

Notably, the future of the Soyuz with Arianespace is now somewhat in doubt, following the issue with the recently launch of two Galileo satellites that were deployed into the wrong orbit.

Thursday’s mission – designated Flight VA218 in the company’s numbering system – was the fourth Ariane 5 liftoff from the Spaceport this year and the 75th launch of this heavy-lift workhorse, which has performed 60 successful flights in a row. 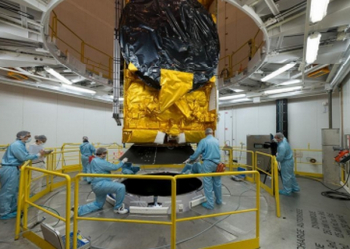 Operated by MEASAT – a Malaysian-based premium supplier of satellite relay services to international broadcasters, direct-to-home platforms and telecom operators – MEASAT-3b will be co-located at the 91.5 deg. East orbital position along with the MEASAT-3 and MEASAT-3a satellites.

“MEASAT-3b was initiated in June 2011. This spacecraft, Malaysia’s largest and most advanced to date, is the result of more than three year’s cooperation between MEASAT, Airbus Defence and Space, the satellite manufacturer, and Arianespace, the satellite launch service provider,” said Paul Brown-Kenyon, Chief Executive Officer, MEASAT Satellite Systems Sdn. Bhd – ahead of the mission. 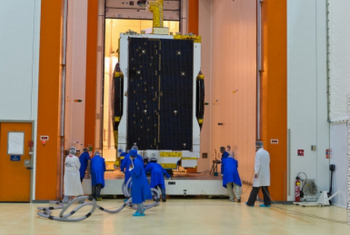 “We look forward to a successful launch.”

In Africa, the AFRICASAT-1a satellite at 46.0 degrees E provides satellite capacity across the African continent with connectivity to Europe, the Middle East and South East Asia.

The MEASAT fleet will be further strengthened with the addition of MEASAT-3b, and MEASAT-3c – which is due to be launched in 2015.

Optus 10 was built by SSL (Space Systems/Loral) for Australian telecommunications service provider Optus. Problems with the satellite ultimately caused a delay to the launch date target.

Optus 10 was the sixth satellite launched by Arianespace for Optus.