After a 10 month journey between planets, NASA’s MAVEN spacecraft has arrived at the Mars on Sunday, 21 September 2014 for a mission dedicated to detailed exploration of the Martian atmosphere. Insertion into Martian orbit occurred at around 21:50 EDT, followed by a commissioning period and observation of comet Siding Spring throughout October.
MAVEN history:

MAVEN, the Mars Atmosphere and Volatile EvolutioN mission, is designed to study changes to the Martian atmosphere.

Originating from the Mars Scout Program, MAVEN was chosen above 20 other mission proposals for funding for a 2013 mission to the red planet.

Like other Mars missions, construction, mission implementation, and pre-flight preparations were carefully choreographed to meet a short, three (3) week 2013 launch window to Mars – a launch window constrained based on mission orbital parameters, planetary alignment, and the sun’s solar cycle (which needed to be “not at minimum” for optimal mission success).

MAVEN itself is 11.43 meters in length, carries a dry mass of 903 kilograms, a wet mass of 2,550 kilograms, and is capable of producing 1,135 watts (in orbit of Mars) from its photovoltaic solar arrays.

After five years of construction and testing, MAVEN was delivered to the Kennedy Space Center, FL, on 2 August 2013 for final mission and launch preparations. 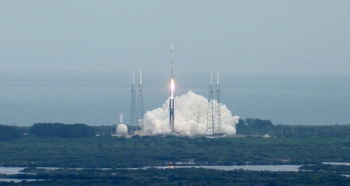 Surviving the U.S. federal government shutdown of October 2013 unscathed, MAVEN continued through processing at Kennedy with only two days worth of interruption to the work schedule.

Following second stage burn, MAVEN coasted in Low Earth Orbit for 27mins before the Centaur upper stage reignited its engine to push MAVEN out of Earth’s gravity field and into a heliocentric Mars transfer orbit.

Flight controllers at the Lockheed Martin Space Systems center in Littleton, Colorado, watched over MAVEN and its systems as the craft’s onboard computers execute the orbit insertion manoeuvre.

As MAVEN neared the red planet, the spacecraft’s six thruster engines briefly fired to dampen out any deviations in MAVEN’s orientation – ensuring the spacecraft is in the proper orientation for orbital insertion. 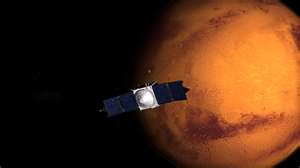 As MAVEN passed over the Mars’ north pole, its six main engines began what was a 34 minute slow burn to reduce MAVEN’s velocity just enough for Mars’ gravity field to grab the spacecraft into a highly-elliptical capture orbit.

The entire burn consumed more than half the propellant onboard MAVEN.

This capture orbit will result in a 35hr orbital period with an apoapsis of 6,300 km and a periapsis of 150 km (in the upper reaches of the Martian atmosphere) and an orbit inclined 75 degrees to the Martian equator. 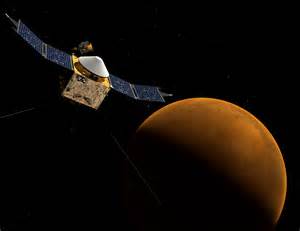 During this time, MAVEN’s orbit will be refined from 35hrs to 4.5hrs for the nominal science collection phase of the mission, and its instruments and science-mapping commands will be tested.

However, it is during this commissioning phase that a unique visitor will arrive at Mars.

Comet Siding Spring (C/2013 A1), first discovered on 3 January 2013 at the Siding Spring Observatory in Australia, was quickly identified as an Oort cloud comet.

Initial calculations of the comet’s trajectory indicated an extremely close encounter with Mars in mid-October 2014, with the comet just missing the red planet by a distance of 41,300 km (25,700 mi) – just slightly more than three Earth diameters. 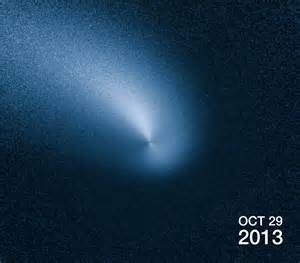 However, as precovery images of the comet were found and studied, it became clear that comet Siding Spring would miss Mars by at least 137,200 km (85,200 mi) – 5.6 times the distance between Mars and its moon Deimos (and 10.7 times Earth’s diameter). 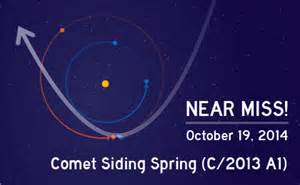 Initially, 2013 observations and predictions indicated the creation of meteor shower across Mars as a result of comet Siding Spring – a meteor shower that would pose a threat to orbiting spacecraft.

Subsequent observations in 2014 have since ruled out a marked increase to the risk to orbiting spacecraft – with the current risk level at “minimal.”

However, the time for greatest concern for MAVEN, as well as the Mars Reconnaissance Orbiter (MRO), Mars Odyssey, Mars Express, and the Mars Orbiter Mission (scheduled to arrive in orbit on 24 September), will come 100hrs after closest approach.

Nevertheless, comet Siding Spring is expected to more than double the amount of hydrogen in the high atmosphere of Mars for a period of several tens of hours as well as slightly warm the upper atmosphere by about 30 degrees K for a few hours. 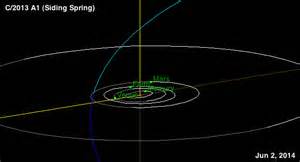 The amount of drag will not be known until the hydrogen production rate of comet Siding Spring is known, but current estimates place the increase drag anywhere from 1.6 to 40 times normal drag.

Thus, MAVEN’s control teams will closely monitor the spacecraft during this time and calculate engine and/or thruster firing commands as needed to maintain MAVEN’s science orbit.

But for MAVEN (equipped with instruments to observe any changes to the gas composition of Mars’ atmosphere), its teams, and NASA, the sheer coincidence of MAVEN’s arrival date at and comet Siding Spring’s close approach to Mars offers a unique opportunity to study the short- and long-term effects of a cometary near miss on a planetary atmosphere – something that no one on the MAVEN team envisioned when planning this mission.

After exiting its commissioning phase, MAVEN will begin gathering detailed data on Mars’ atmosphere with a specific eye toward explaining what caused water in Mars’ atmosphere to be lost to space over the billions of years of the planet’s evolution.

Formations on the Martian surface and the surface discovery of certain minerals that form in the presence of water suggest that Mars’ atmosphere, at one time, had to be much thicker than it currently is.

Thus, over the last few million years, Mars has lost nearly 99% of its atmosphere to space.

Scientists think this is because of planetary core cooling which in turn caused the collapse of Mars’ protective magnetic field (like the one that currently protects Earth’s atmosphere from being swept away by the solar wind).

Without the presence of this protective magnetic field, Mars’ atmosphere was slowly stripped away by the solar wind. 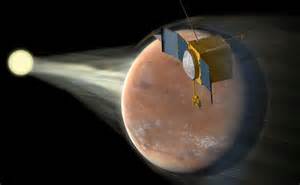 Over the course of its one-Earth-year primary science mission, MAVEN will help answer the question of how this has been and is happening.

To do this, MAVEN will collect detailed measurements of Mars’ upper atmosphere to determine the rate at which the Martian atmosphere is currently escaping into space.

These readings will be coupled with similar readings taken by the Curiosity rover on the surface of Mars for data comparison. 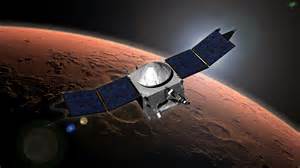 To accomplish these objectives, MAVEN carries three instrument suites, including the Particles and Fields Package (PFP), the Remote Sensing Package (RSP), and the Neutral Gas and Ion Mass Spectrometer (NGIMS).

The PFP contains six instruments to characterize the solar wind at Mars and the ionosphere of the planet.

Additionally, the RSP instrument suite will help determine global characteristics of the upper atmosphere and ionosphere of Mars while the NGIMS will measure the composition and isotopes of neutrals and ions in the Martian atmosphere.