Two US astronauts enjoyed a busy day outside the International Space Station (ISS), conducting the second of two recent spacewalks, replacing failed components and beginning the process of reconfiguring the station for the arrival of future commercial crew vehicles. The EVA was completed after six hours and 34 minutes during Wednesday’s excursion.

The EVA involved astronauts Reid Wiseman as EV-1, who wore the suit with the red stripes, and Barry “Butch” Wilmore as EV-2, who wore the plain white suit. This was the first ever EVA for Wilmore, and the second EVA for Wiseman.

Following the egress of the Quest Airlock (A/L) and the usual period of setup tasks, the first order of business for Wiseman and Wilmore was for the pair to translate out to the Starboard side of the station, specifically the Starboard 4 (S4) Truss, where the 3A power channel is located.

This was to support the first task of the EVA, which is the Removal & Replacement (R&R) of the 3A Sequential Shunt Unit (SSU), which failed back in May, taking with it one of the station’s eight power generation channels.

All ISS US segment electrical power is generated via the station’s eight Solar Array Wings (SAWs), with each one of the eight SAWs following the same power generation architecture. These eight separate power generation systems are each known as power channels.

Each SAW generates power at between 150 and 170 Volts Direct Current (VDC). This large fluctuation in power is regulated to a stable 160 VDC, which is known as primary power, by the SSU. Since there are eight power channels on the ISS, there are thus eight SSUs on ISS, with each SSU dedicated to its own power channel (i.e. SSU-3A is part of channel 3A).

From the SSU, the primary power is then sent to a corresponding Direct Current Switching Unit (DCSU), which essentially switches ISS power sources between the SAWs during orbital daytime, and the storage batteries during orbital night-time.

Back on the 8th May, SSU-3A experienced a suspected short circuit, causing Remote Bus Isolator-1 (RBI-1), which is essentially a circuit breaker, inside the downstream DCSU-3A to trip open, which led to the shutdown of the entire 3A power channel, taking with it 12.5 per cent of the station’s power capacity.

Thus, SSU-3A was replaced with a brand new unit during the EVA. The SSU R&R was supposed to be a fairly simple affair, since SSUs are just rectangular box-like components located at the base of the Mast Canister Assembly (MCA) of their associated SAW (in this case SAW-3A on the S4 Truss). 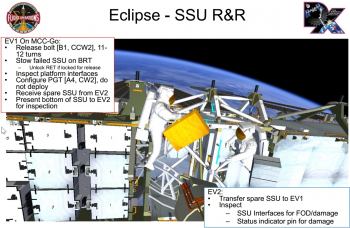 The failed SSU-3A was first removed via the driving of a single bolt, whereupon it was exchanged for the new replacement unit, which was brought outside the ISS along with the spacewalkers.

The new unit was then installed into the same location via the driving of a single bolt, with electrical connections being made via blind mate connectors underneath the SSU. However, they required the use of a ratchet wrench to secure it in place after it proved to be initially problematic.

With it finally secured in place, ground control teams powered up the new SSU and began the checkout process – which proved to be successful – whereupon which the spacewalkers cleaned up the worksite, taking the failed SSU with them for returning inside the ISS at the conclusion of the EVA. 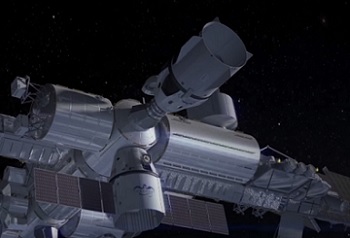 At the 2 hour 15 minute mark in the EVA, the duo were ready to start their next major task, which was devoted to beginning the long-awaited station reconfiguration in order to support the future arrival of new commercial crew vehicles.

This is all part of a complex choreography of events that will ultimately lead to the station having two docking ports for commercial crew vehicles (one primary and one back-up), since presently it only has one.

Currently, the only port available for dockings is Pressurised Mating Adapter-2 (PMA-2) at the forward end of Node 2, which is the port to which the Space Shuttle used to dock.

Another PMA (PMA-3) is available on the Port side of Node 3, however at this location it is unusable for docking purposes due to clearances with the station structure.

Due to this fact, next year PMA-3 will be relocated to the currently unoccupied Zenith port of Node 2, where it will be able to serve as a back-up docking port for commercial crew vehicles.

This presents its own problem however, since the Node 2 Zenith berthing port is presently designated as the back-up berthing port for cargo vehicles, a role it will be unable to perform once PMA-3 is installed there due to differences in docking/berthing mechanisms between crew and cargo vehicles.

To accomplish this, the plan is for the Permanent Multipurpose Module (PMM), currently located at the Node 1 Nadir port, to be relocated to the Node 3 Forward port.

This will free up the Node 1 Nadir port to become the back-up cargo vehicle berthing port. However, before the PMM can be relocated, a number of external preparatory tasks need to be completed via spacewalks, which was a major task during this EVA.

This is because the APFR + TS in this previous location would cause interference with the robotics activities for the PMM relocation. 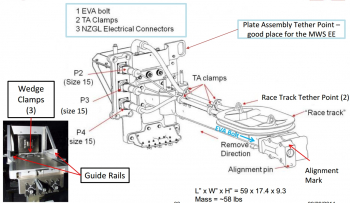 Once completed, the next task for the two spacewalkers was the relocation of a Video Stanchion Support Assembly (VSSA) – basically a long pole onto which a camera or other hardware can be mounted – from the P1 Truss, to the Zenith side of Node 2.

This is because the VSSA in its previous location at Camera Port-7 (CP-7) on the P1 Truss was right in front of the Node 3 Forward port, which would preclude the PMM from being installed there if it were not relocated.

The removal of the VSSA from CP-7 involved first removing a remote-controlled video camera and light unit, known as an External Television Camera Group (ETVCG), from the VSSA by driving three bolts to separate the ETVCG from the VSSA.

Meanwhile, EV-1 Wiseman translated out to CP-8 on the Zenith-Outboard side of the P1 Truss to retrieve a Wireless External Transceiver Assembly (WETA) – basically a wireless receiver for EVA helmet camera video – from the VSSA at CP-8 via driving a single bolt, and took it to the newly installed VSSA at CP-11 atop Node 2 for installation at that location.

Wiseman then installed the ETVCG that was removed from the VSSA at CP-7, onto the unoccupied VSSA at CP-8, which “declared victory” and completed the timelined tasks of the EVA.

The pair opted not to work a few get-ahead tasks before the EVA concluded.

These get-ahead tasks would have included breaking torque on bolts that hold batteries in place on the S4 Truss, specifically by releasing one of the two bolts (designated H1) on each of three batteries, and releasing and then re-torqueing the second bolt (H2).

This would have been in preparation for a battery R&R that will occur during the HTV-6 mission in a few years’ time. Since this battery R&R is planned to be completed robotically, having spacewalkers release bolts ahead of time would have been desirable.

The other get-ahead tasks included the retrieving of a failed light unit from the ETVCG at CP-9, retrieving bags from outside Node 3 and the Quest airlock, routing an Ethernet cable for the future Russian Multipurpose Laboratory Module (MLM), reconfiguring handle tie-downs on the Port and Starboard Crew & Equipment Translation Aid (CETA) carts, and installing a clamp on the airlock handrail.

However, despite the get-aheads not been taken, Wiseman and Wilmore ingress the airlock to conclude what was a very successful EVA.