ATK’s Launch Abort System (LAS) – a key element for crew safety during the ride uphill on the Space Launch System and Orion – continues to make good progress during its test schedule. With the Exploration Flight Test -1 (EFT-1) flight set to provide key data ahead of the Ascent Abort (AA-2) test in 2019, the LAS is on schedule to be ready for its crucial role on crewed SLS missions in the 2020s.

The Launch Abort Systems (LAS) – or Launch Escape System (LES) – is traditionally a tower system, attached on top of the crew capsule, ready to “pull” the capsule – and its crew – away from a failing vehicle, be it at the launch pad, or during early ascent.

These LAS towers can be seen on the early crewed launch vehicles, having first been tested in 1960 – when the “Beach Abort” practised the abort technique on the first production Mercury capsule at NASA’s test facility at Wallops Island. 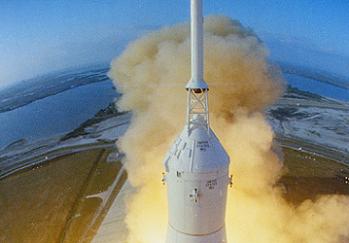 While Gemini used ejection seats, the towers became part of the Mercury and Apollo programs, even earning a place in Hollywood movies, such as when Tom Hanks – playing Commander Jim Lovell in the movie Apollo 13 – reached forward to manually jettison the tower during second stage flight during the film’s launch scene.

The early flights of the Space Shuttle only employed ejection seat capability, as much as it was hinted using such a system – only available for a limited time during first stage ascent – would have provided the escaping astronauts very little chance of survival. The Shuttle mainly relied on abort scenarios involving the return of the crew with the orbiter.

Thanks to the strict safety record of crewed launch vehicles, the use of the LAS has only been called for once during an actual emergency, with the Russians. 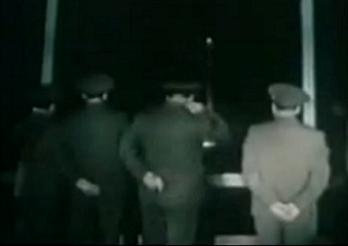 Another abort – Soyuz 18A – aborted in flight, resulting in the crew landing safely near the Chinese border – however, it is believed this event came after LAS jettison, with the abort carried out by the Soyuz engines.

The clear use of the LAS during an abort event is a famous one – mainly due to the footage finding a large audience on youtube – as the crew of Soyuz T-10-1 underwent a pad abort, just seconds before their failing vehicle exploded on the launch pad.

It was reported that the crew landed safely, just four miles away.

For the defunct Vision for Space Exploration (VSE) – a direct fallout of the Columbia disaster – crew abort safety for the next human launch system was paramount, as NASA reverted back to a capsule design, with a full Launch Abort System. 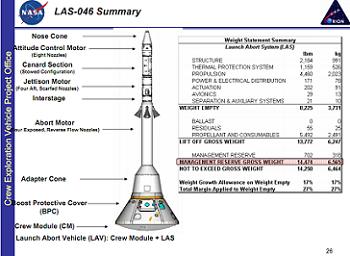 In 2007, a major trade of several LAS concepts were evaluated by NASA managers, namely the Multiple External (x4) Service Module (SM) Abort Motor concept, the Crew Module Strap On Motors (x4) concept, and the In-Line Tandem Tractor (Tower) concept – the latter of which was baselined into Ares I/Orion design.

The trades requested the preferred design should ensure the risk of losing the crew in an abort scenario would be no greater than 1:10, noting such a system is no guarantee for crew survival during an emergency. 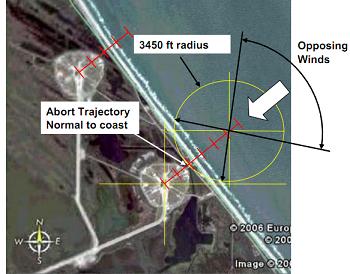 The primary role of such a system is to save the crew during the ‘three stages’ of an abort, the first involving the firing of the spacecraft – in this case Orion – away from a failing vehicle on the launch pad to a safe distance, before deploying the parachutes on the Orion, for a landing in the Atlantic ocean within a 3450 ft radius due east of the launch pad.

The second stage of an abort is noted as “mid altitude” – which has a different characteristic when compared to pad abort. This stage of abort works for up to 150,000 ft, involving the LAS remaining on the vehicle after firing the Orion safely away from the failing vehicle until the point of drogue chute deployment, which becomes necessary at that altitude.

The final stage of abort, which would still require the LAS, is at an altitude of between 150,000 ft and 300,000 ft – the latter being the point the LAS would be jettisoned on a nominal flight. After being pulled away from the launch vehicle, Orion would revert to a flight profile similar to that used during the end of a normal mission.

This LAS design has enjoyed one test launch, lofting a boilerplate Orion into the skies of White Sands, New Mexico, during the successful PA-1 (Pad Abort -1) test in 2010.

That was during the since-cancelled Constellation Program (CxP). However, the system has been re-purposed for continued use with Orion, this time to provide crew abort capability during SLS launches.

Orion’s first launch into space isn’t on the SLS, but instead atop of a Delta IV-Heavy during EFT-1 at the end of this year.

An inert LAS has been provided by ATK, which was recently mated with the EFT-1 Orion ahead of the mating of the stack with the United Launch Alliance rocket.

Despite being an inert motor, the LAS will provide vital data to the engineering teams.

“The abort motor for EFT-1 is inert but must meet the flight environment requirements and provide the same structural performance as a live motor,” noted ATK to NASASpaceFlight.com

“ATK modified an inert motor built and delivered during early development and subjected it to structural loads required to show compliance to EFT-1 flight environments.

“We also designed and built unique raceway brackets to secure the electrical raceway covers for EFT-1, performed proof tests, and added flight instrumentation.  We then performed design requirements verification for the EFT-1 flight. The EFT-1 primary purpose is to test and validate the crew module. ” 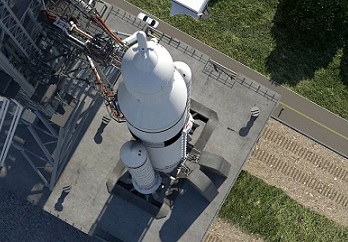 Another inert LAS will ride with the debut launch of the SLS, during 2018’s Exploration Mission -1 (EM-1). However, that too will aid the knowledge base that began with the test flight of PA-1.

“The EM-1 flight will use another inert abort motor, which must meet the flight thermal and structural requirements. Except for live propellant, the EM-1 will use the abort motor operational design,” added ATK.

“The successful Pad Abort-1 flight held in May 2010 used the abort motor development design. The primary advancements and modifications for the operational design include an optimized lighter weight manifold, which redirects the hot gas flow and propellant grain design modification to achieve a lower thrust profile.”

The EM-1 flight will be followed by arguably the biggest test milestone for the LAS, via the 2019 AA-2 test.

This uncrewed ascent abort will be conducted in the high dynamic pressure environment, testing the LAS in a key area of the ride uphill, where the launch vehicle is under the most strain.

“The abort motor design for the AA-2 flight test will be the operational design with live propellant. It will validate abort motor performance during assent,” ATK added.

The test is designed to evaluate LAS ability to separate and maneuver the Crew Module (CM) out of the path of the launch vehicle during the initial ascent phase, although the test conditions are still under development by NASA and Lockheed Martin.

“(The test will be a) mid-altitude abort from an Abort Test Booster (ATB), with the trajectory designed to achieve desired test condition (Altitude, Mach Number, Dynamic Pressure, Angle of Attack, etc.),” ATK noted. 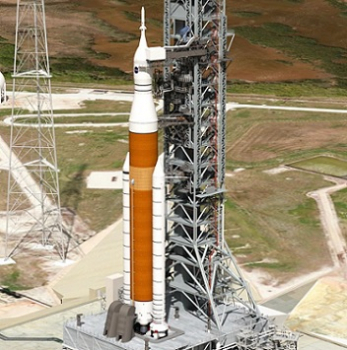 Should the testing go to plan, the next LAS will be installed to the Orion and SLS that is currently tasked with lofting the first crew onboard the duo, via the Exploration Mission -2 (EM-2) flight.

There is, however, the potential that the second SLS flight will also be uncrewed – in 2020 – possibly involving a cargo mission, which would preclude the use of the LAS.

This interim flight would also allow for the debut of the powerful Exploration Upper Stage (EUS), should an uncrewed “human rating” flight be required.

Meanwhile, additional testing of the LAS was conducted by ATK just last month, with the successful static test of the launch abort motor igniter, conducted at the company facility in Promontory, Utah.

The test is the next step toward qualifying the igniter for production.

“As a former astronaut, I understand how critical the abort motor is to the safety of those flying aboard the Orion spacecraft,” noted Charlie Precourt, vice president and general manager of ATK’s Space Launch division. “ATK is operating at the highest standard to ensure this motor will be ready and reliable, if needed.” 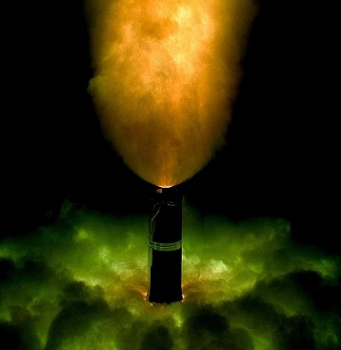 For this qualification test, technicians exposed the igniter to vibrations and extreme temperatures to simulate pre-operating and flight conditions before firing it and at its hottest condition.

Next year, the igniter will undergo a similar qualification test, but it will be fired at its coldest temperature. Previous tests include a development test that verified igniter performance analytical models prior to a static test of the launch abort motor, and Pad Abort-1, a ground launch test of the entire LAS.

This igniter design enables the abort motor to activate within milliseconds, lifting the crew module to safety with an acceleration over 10gs.

The next major abort motor milestone will be its Critical Design Review, scheduled for summer 2015.

“Our employees have done an outstanding job in advancing the maturity of the launch abort motor by successfully executing several qualification tests this summer, including the manifold ultimate loads test, igniter closure hydro-test and this igniter static fire test,” Mr. Precourt added.

“This is real rocket science, and our employees are committed, intelligent people making our journey to deep space possible.”

(Images: Via ATK, NASA and L2 content from L2’s SLS sections, which includes, presentations, videos, graphics and internal – interactive with actual SLS engineers – updates on the SLS and HLV, available on no other site.)