C/2013 A1, better known as Siding Spring, has buzzed Mars, under the close watch of the international fleet of spacecraft and rovers that are residents of the Red Planet. The threat posed by the comet – and its envelope of gas and dust – to the Martian spacecraft has been heavily mitigated, allowing for the focus to switch towards gaining valuable and unique scientific data on the visitor as it flew past Mars.

When the Comet was first discovered at the beginning of 2013, there were initial fears it might collide with Mars.

Imaged by the Wide Field Camera 3 on NASA’s Hubble Space Telescope, the potential of it crashing into Mars was quickly dismissed.

However, the main fear related to the comet – and its envelope of gas and dust – posing a serious risk to the fleet of orbiting spacecraft.

Refined calculations allowed for the removal of that threat, showing that on October 19, 2014, Comet C/2013 A1 would miss, but make a very close pass of within about 87,000 miles (139,500 kilometers) of the Red Planet – less than half the distance between Earth and our moon and less than one-tenth the distance of any known comet flyby of Earth.

Due to the close pass, the controllers responsible for the Mars orbiters have kept a very close eye on the Comet.

“In 2013, we had very little information about the comet, which was still very far and faint. In the worst case, we expected the pass to be much closer, and the comet to be much more active,” noted Spacecraft Operations Manager Michel Denis for ESA’s Mars Express.

“We designed a special mode for Mars Express that would minimise any risk due to impacts with cometary particles. This included turning off all instruments and non-essential onboard systems, and turning the spacecraft so as to use the large high-gain antenna as a shield.”

Instead of ducking for cover, the Mars fleet will turn this close pass into an opportunity for science.

NASA’s extensive fleet of science assets, particularly those orbiting and roving Mars, have front row seats to image and study this once-in-a-lifetime flyby.

While NASA took steps to protect its Mars orbiters, the main goal was preparing them for opportunities to gather valuable scientific data.  The NASA orbiters at Mars are Mars Reconnaissance Orbiter, Mars Odyssey and MAVEN.

NASA’s Mars Odyssey spacecraft successfully adjusted the timing of its orbit around Mars as a defensive precaution.

Mars Odyssey in the Red Planet veteran, having worked at the Red Planet longer than any other Mars mission in history. NASA launched the spacecraft on April 7, 2001, and Odyssey arrived at Mars Oct. 24, 2001

The orbiter fired thrusters for five and a half seconds in early August  5, with the maneuver calculated to place the orbiter behind Mars during the half hour on the flyby date when dust particles released from comet C/2013 A1 Siding Spring are most likely to reach Mars.

“The modeling predictions for comet Siding Spring suggest a dust-particle impact would not be likely in any case, but this maneuver has given us an added protection,” said Mars Odyssey Project Manager David Lehman of NASA’s Jet Propulsion Laboratory, Pasadena, California.

“Those dust particles will be traveling so fast that even one hit could end our mission.”

The maneuver used four trajectory-correction thrusters, which each provide about 5 pounds (22 newtons) of force. It consumed less than one percent of the orbiter’s remaining fuel.

Following the event, all three orbiters were confirmed to be healthy. 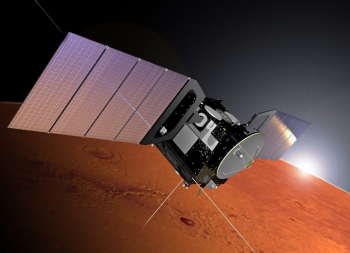 ESA’s Mars Express has been tasked with taking close-up observations of this Comet, the Mars atmosphere under the direct influence of the comet’s gas and dust, and the complex three-way interaction between Mars, the comet and the solar wind.

The detailed observation plans included high-resolution imaging of the comet and its structure.

“Most interestingly, we may also obtain images of cometary particles – meteors – burning up in the Martian atmosphere, allowing an in-depth comparison of meteor science between Earth and Mars,” added Hakan Svedhem, project scientist for Mars Express. 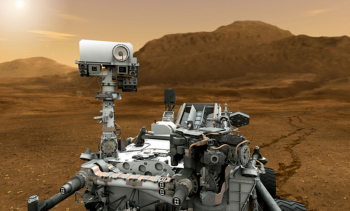 On the surface of Mars, NASA’s rovers Opportunity and Curiosity are protected from any comet dust, should any reaches the planet. Both rovers were scheduled to make observations of the comet.

Meanwhile, NASA’s asteroid hunter, the Near-Earth Object Wide-field Infrared Survey Explorer (NEOWISE), has been imaging, and will continue to image, the comet as part of its operations.