Following two successful US EVA that, among other tasks, saw the failed ammonia Pump Module relocation and Sequential Shunt Unit (SSU) changeout, the Russian members of the Expedition 41 crew stepped outside into the vacuum of space, ahead of removing and jettisoning unneeded hardware and decommissioned experiments in the final EVA of 2014. The EVA was a huge success, ending early due to the ease at which they completed the tasks.

The pair of spacewalkers planned to spend six hours and seven minutes outside the Russian segment, where they retrieved an experiment cover and continue with a series of tests that span multiple Russian EVAs. However, due to managing to get over two hours ahead of schedule, the spacewalk ended early.

During the spacewalk – as per usual with a Russian EVA – the dou jettisoned unwanted hardware into the depths of space.

For this EVA, Suraev was designated EV-1 and wore an Orlan suit with red stripes, Samokutyaev (EV-2) was wearing a suit with blue stripes. This was the second EVA in both of the cosmonauts’ careers.

After exiting the airlock, they translated to plane II of the service module’s large diameter section. 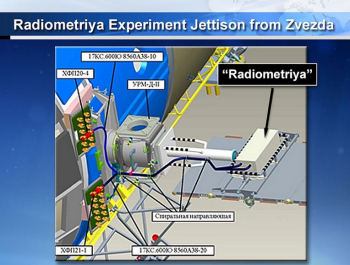 here, they uninstalled the Radiometriya experiment from a universal working platform (URM-D).

The Radiometriya microwave radiometry experiment had been in operation on Station since March 2011.

The experiment has since provided data that will help develop instruments for studying of the Earth’s surface from space. The experiment is no longer operational after its power supply has failed.

The spacewalkers jettisoned the experiment hardware in the aft direction, to avoid any recontact with the station’s hull.

Once the Radiometriya experiment was jettisoned, the cosmonauts continued work on the URM-D. They removed a protective cover from the Expose-R experiment, which was installed on Zvezda’s hull by cosmonauts on the previous EVA-39. 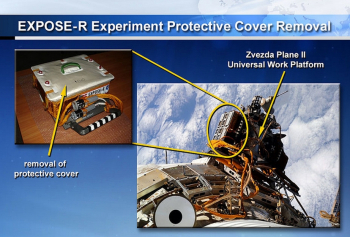 Expose-R is a joint ESA-Roskosmos experiment, which exposes biological and organic materials to the space environment.

It is a modular experiment that can be brought back inside the station, have its contents swapped out, and redeployed back on the exterior of the station.

After removing the Expose-R cover, the cosmonauts moved back to the Pirs airlock, and stowed the cover there, taking pictures and video of several radiator panels along the way.

From the airlock, they retrieved hardware needed for the next tasks on the timeline – the Test experiment and an EVA cable cutter.

The spacewalkers translated along the Strela boom, which extends Zenith from the Pirs module to the Poisk module.

Since there are no plans to undock or move the module, the docking antennas are no longer needed.

The crew will first use the cable cutter to cut cables that connect antenna 2АСФ1-2 with the module and removed the antenna. They then took pictures of MRM-2 and climb further Zenith to jettison the uninstalled antenna.

The same procedure was repeated with the second antenna, designated 2АСФ1-1. Both were successfully deployed aft of the Station, in the direction of the docked ATV.

Finally, the cosmonauts translated back to the Pirs airlock’s hatch number 2, where they used cotton swabs to take samples from the hatch window for the Test experiment.

Tests are part of an ongoing investigation into microbial growth on the Russian segment’s hull. The samples taken were then brought inside and placed inside a Ziploc bag. They will then be packed for return to Earth.

This task wrapped up the spacewalk, which had proceeded so well, its conclusion came much earlier than planned, after just three hours and 38 minutes.

During the course of the EVA, the crew inside the station were separated, with access to their Soyuz lifeboats in case of a contingency situation. Flight engineers Barry Wilmore and Yelena Serova were locked out in MRM-2, while Reid Wiseman and Alexander Gerst were free to move around the US segment and the FGB.

There are no other EVAs planned for this year.