A Russian Soyuz 2-1A rocket lofted the latest Progress resupply vehicle (M-25M) for a fast rendezvous trip to the International Space Station (ISS). The launch of the Progress – riding on a Soyuz 2-1A for the first time – occurred at 07:09 GMT on Wednesday from the Baikonur Cosmodrome in Kazakhstan, ahead of a six hour trip to the orbital outpost.

Russia’s Soyuz-2-1A rocket was used to launch the resupply vehicle for the first time, taking over from the Soyuz-U.

The 2-1 version of the world famous rocket first flew in November 2004. Derived from the earlier Soyuz-U and the Soyuz 11A511 before that, the rocket was intended as an eventual replacement for all of the Soyuz and Molniya variants then in service.

The Molniya-M was retired from service in 2010 and the Soyuz-2 has already replaced the Soyuz-U for all launches apart from Progress missions to the International Space Station. That was until Wednesday’s mission.

The Soyuz-2 has three principal variants; the 2-1a, 2-1b and 2-1v (v being the Romanisation of the third letter of the Cyrillic alphabet). The 2-1a is a modernised version of the Soyuz-U, while the 2-1b introduces a new RD-0124 stage engine.

The first and second stages of the Soyuz-2-1a burn in parallel; the first stage consists of four strap-on boosters powered by RD-117 engines, clustered around the core, or second stage, which is powered by an RD-118.

Atop the core sits the third stage with an RD-0124 engine that injected the Progress spacecraft into its target orbit. 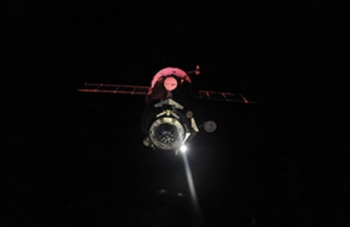 For Progress M-25M’s arrival, the usual requirement of bidding farewell to a previously docked Progress was conducted earlier this week.

Progress M-24M undocked on Monday and will undergo three weeks of engineering tests in orbit before being commanded to reenter Earth’s atmosphere, where it will burn up over the Pacific Ocean.

The latest Progress sports an increased cargo manifest, afforded to it via the additional power of the Soyuz 2-1A.

Although this is not the primary reason for switching to the Soyuz 2-1A, an extra 400 kg can be lofted via this new partnership,  although not all of that additional margin has been taken advantage of with Progress M-25M as such an increase would likely require design changes to the Progress.

The cargo ship’s manifest includes 1,300 kg of dry cargo, 420 kg of water in the Rodnik tanks, 880 kg mid- section propellent and 250 kg of PAO propellant for the ISS.