The third X-37B mission concluded on Friday, with the spaceplane finally making her return back to Earth after nearly two years in space. The X-37B Orbital Test Vehicle 3 (OTV-3) safely landed on Runway 12 at Vandenberg Air Force Base in California at 16:24 GMT, where she now undergoing post flight safing and processing.

The X-37 program was started by NASA, but taken over by DARPA, the Defense Advanced Research Projects Agency (DARPA) in 2004.

Drop tests of the X-37A variant began in April 2006, with development of the operational X-37B variant beginning the same year. The X-37B made its first flight in April 2010, with OTV-1 launching aboard an Atlas V. 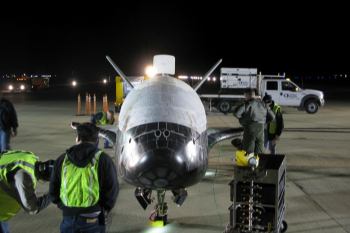 The first mission lasted seven months, landing in December, 2010 at Vandenberg. It was followed three months later by the second mission, OTV-2, which launched in March, 2011.

This mission remained in orbit for 15 months, finally landing on 16 June, 2012. Details of both missions were classified, however they are assumed to have been successful, and the vehicles were both recovered intact.

The X-37B Orbital Test Vehicle 3, or OTV-3, mission was the third space flight of the X-37 program, and used the same spacecraft which flew the OTV-1 mission, allowing her the honor of being the first X-37B to be reused.

Reusability has always been a goal for the program, however further flights were uncertain before the success of the first mission. 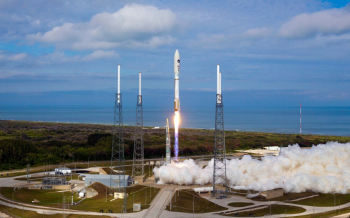 Following her launch on December 11, 2012 atop of the United Launch Alliance (ULA) Atlas V, the mission was redesignated USA-240 in keeping with the designation system used for many large US military spacecraft; the OTV-1 and OTV-2 missions were known as USA-212 and USA-226 respectively.

The mission was conducted by the United States Air Force’s Rapid Capabilities Office, which will use the spacecraft for classified research; believed to be technology demonstration for future spacecraft. 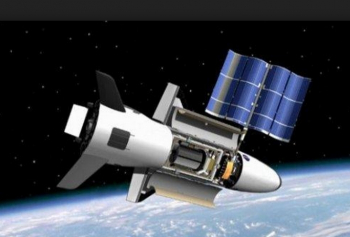 The X-37B was designed to operate for up to 270 days in orbit; however the OTV-2 mission appeared to have extended this by around 180 days, following its 468 day flight which concluded in June.

As such it was always unclear how long OTV-3 was intending to remain in orbit, with the only known details pertaining to the landing site, which classed Vandenberg Air Force Base as primary, with Edwards Air Force Base considered a backup option.

According to an eyewitness who saw the vehicle return – after several aborted attempts earlier in the week – the weather was perfect for the X37-B’s trip home.

Light ground fog burned off 90 minutes before landing, winds were nearly calm, visibility was unlimited and only high scattered cirrus clouds were in the area.

Although the airspace was closed from 0800 to 1600 local time for the landing attempts, range activity showed that there was only one attempt per day and waive offs came before 0815 local and no reset for later attempts was conducted.

The audible confirmation of the vehicles return was not unlike the Shuttle, with a double sonic boom – albeit a good bit quieter. This came around two minutes prior to landing, per the eyewitness report. The spaceplane returned to Earth from the ascending node of her orbit.

Due to the vehicle’s small profile, the X-37B was not visible to the naked eye until around 15 seconds before touchdown. The vehicle appeared to approach much steeper and faster than shuttle landings.

The landing sequence was conducted at pace, but the rollout appeared to be right on centerline, with the speed brake extended.

No tire damage was visible as she rolled out and stopped close to the 3,000 foot runway remaining marker. 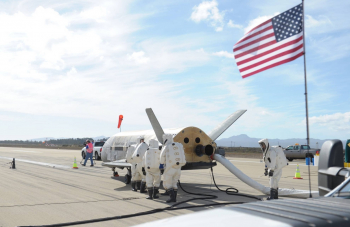 The vehicle had noticeable light tan shadings on the forward half of the cargo bay doors and the side of the fuselage ahead of the wing, presumably from re-entry heating. Otherwise the vehicle looked clean.

Unlike Shuttle, the recovery ground vehicles did not immediately roll out to meet the vehicle and she was sat alone after wheels stop on the runway for at least five minutes on her own.

“The 30th Space Wing and our mission partners, Air Force Rapid Capabilities Office, Boeing, and our base support contractors, have put countless hours of hard work into preparing for this landing and today we were able to see the culmination of that dedication,” said Col Keith Balts, 30th Space Wing commander.

“I’m extremely proud of our team for coming together to execute this third safe and successful landing. Everyone from our on console space operators to our airfield managers and civil engineers take pride in this unique mission and exemplify excellence during its execution.”

Power is provided by lithium ion batteries charged by a gallium arsenide solar array which will be deployed shortly after launch. 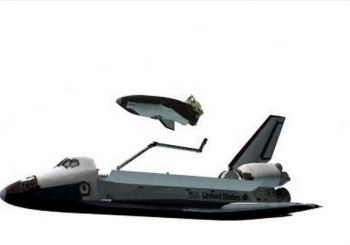 Although the X-37 was originally designed to be launched by the Space Shuttle (click here for a huge collection of L2 videos and graphics), and later the Delta II, the restriction of the former to ISS assembly, and aerodynamic issues with the latter, resulted in the Atlas V being chosen to carry it to orbit.

There have been notional plans for a crewed version of the vehicle via expanding capabilities.

Notably, the X-37B will regain some synergy with the Shuttle program, when two of the vehicles take up residency in the former home of the orbiters.

Following last week’s announcement, it was revealed the US Air Force’s X-37B spacecraft will make use of OPF’s 1 and 2.

The two OPFs are adjoining, removing the issue of a military vehicle living next door to a commercial spacecraft – as much as that could have been catered for, as noted during the period where SNC’s Dream Chaser was expected to take up residency in one of the OPFs.

The Air Force is preparing to launch the fourth X-37B mission from Cape Canaveral Air Force Station in 2015.

(L2 is – as it has been for the past several years – providing full exclusive Exploration Planning coverage. To join L2, click here: http://www.nasaspaceflight.com/l2/)