One pilot has died and another seriously injured during a test flight failure of Virgin Galactic’s SpaceShipTwo on Friday. The much-delayed suborbital space tourism vehicle suffered a catastrophic failure that resulted in the spaceplane breaking up and crashing to the ground in pieces. The test used a new fuel mixture formulation for the first time in flight, although the engine is not believed to be the leading candidate of the root cause investigation.

Lead by Virgin head Sir Richard Branson, it was initially claimed Virgin Galactic would be ready to launch passengers by 2008. The company claims it holds deposits from over 500 customers.

These customers would enjoy several days of training, prior to boarding a SS2 from the newly built Spaceport America in New Mexico.

Developed from the historic advancements made by the world’s first manned private spacecraft SpaceShipOne (SS1), SS2 is the design of renowned aircraft designer Burt Rutan and his company, Scaled Composites.

VSS Enterprise’s first glide tests occurred in 2010, prior to the spacecraft eventually enjoying its first powered flight, which took place on April 29 of 2013 and was successful.

However, questions were raised on the fuel mix employed by this hybrid motor, not least due to the requirement to find additional power to propel SS2 to the required suborbital altitudes that would allow passengers to be classed as astronauts, but also due to apparent stability issues after 20 seconds of firing. 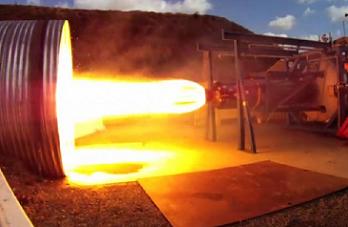 Earlier this year, Virgin Galactic bosses opted to switch from the rubber-based HTPB to a thermoplastic polyamide as the solid fuel. Friday’s mission was the first time this fuel was used during a flight test. It had been ground tested prior to flight.

SNC has been quick to note the company had no involvement with the engine that was used during Friday’s failure.

“SNC was in the past involved as a subcontractor to Scaled Composites, the prime contractor of this program for Virgin Galactic and was previously involved with the three successful powered flight tests of SS2,” SNC noted on Friday.

“However, SNC’s technical and program involvement ended in May of 2014 with Virgin Galactic’s announcement to use its own internally developed technology for the SS2 rocket motor.

“SNC had no involvement in the build or qualification testing of the motor used in this flight, nor in the integration of this motor to SS2. SNC was not engaged in any manner in the pre-flight safety or technical approvals or in the flight operations of the mission conducted today. We were not aware of the test today, nor present on site or remotely monitoring the testing.” 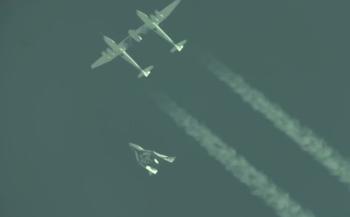 Friday’s mission began with SS2 being lofted to around 47,000 feet altitude over the Mojave desert by the WhiteKnight2 (WK2) carrier aircraft. SS2 was nominally released from WK2.

Once the two vehicles were clear of each other, the pilots will have triggered ignition of the rocket motor, causing the main oxidizer valve to open and igniters to fire within the fuel case.

SS2 would have been propelled forward and upward during what was to be a 30 second burn. However, various reports point to a troublesome ignition – known as a “hard start”.

There are also reports a re-ignition was attempted – although that also appears to be based on speculation. However, what is known is the vehicle soon suffered a serious anomaly that resulted in vehicle break up due to aerodynamic stresses.

Photos of the failure have been acquired by NBC News, accredited to photographer Kenneth Brown.

Officials note there was a duration of two minutes between the point of release from WK2 and the in flight anomaly. However, further details have since been embargoed due to the rules of investigation by the NTSB staff, who are now at the scene and collecting evidence.

As such, the events following the break up are not yet clear, although it is known the co-pilot – since officially named as Michael Alsbury – lost his life and was still with the crippled remains of the vehicle on the ground.

“The Scaled Composites family lost a respected and devoted colleague Michael Alsbury, who was the co-pilot for the test flight of SpaceShipTwo,” noted SS2’s manufacturer, Scaled Composites.

The other pilot was thrown clear of the vehicle and parachuted to the ground. He is in hospital with serious injuries.

“We remain focused on supporting the families of the two pilots and all of our employees, as well as the agencies investigating the accident. We ask at this time that everyone please respect the privacy of the families.”

Neither pilot was wearing a pressure suit for the test flight.

WK2 – and its crew – safely returned to base, likely with video footage that will aid the investigation.

Sir Richard Branson flew to Mojave to meet with his team at the weekend, although he too was bound by NTSB rules on providing any information on the early data related to the failure.

The NTSB has, however, been quick to note they found the engine and fuel tanks intact, before noting there was an early deployment of the spacecraft’s feathering system – used to create additional drag upon return – pointing to the potential of mechanical and/or pilot error.

While the mass media have been searching for their usual angles, the space flight community – from those that work within it and the space flight media – have, as per usual, rallied behind Virgin Galactic. Comments of sympathy and support have been sent from SpaceX’s Elon Musk, astronauts on the International Space Station (ISS) and NASA.

“On behalf of the entire NASA family, I offer our deepest condolences to the family and loved ones of the pilot lost in today’s accident involving Virgin Galactic’s SpaceShipTwo, and we are praying for a speedy recovery of the other pilot,” added NASA Administrator Charles Bolden.

“While not a NASA mission, the pain of this tragedy will be felt by all the men and women who have devoted their lives to exploration. Space flight is incredibly difficult, and we commend the passion of all in the space community who take on risk to push the boundaries of human achievement.”

It is unknown as to how long the investigation will take and too early to know when SS2 will return to flight. The immediate priority is focused on the families of the test pilots and the investigation at hand.

“Space is hard, and (this) was a tough day. We are going to be supporting the investigation, as we figure out what happened today,” noted George Whitesides, CEO and President of Virgin Galactic.

“We are going to get through it.”