Another three crewmembers have competed a fast rendezvous trip to the International Space Station on Sunday. Terry Virts of NASA, Anton Shkaplerov of Roscosmos and a tuneful Samantha Cristoforetti of the European Space Agency rode onboard their Soyuz TMA-15M spacecraft and arrived at the ISS after six hours of flight, following launch on their Soyuz FG rocket from the Baikonur Cosmodrome.

The Soyuz was under the command of Samokutyaev, who was selected as a GCTC cosmonaut-candidate in 2003.

He began advanced training towards his ISS mission in 2005, before being assigned as Soyuz commander and flight engineer on this latest expedition. 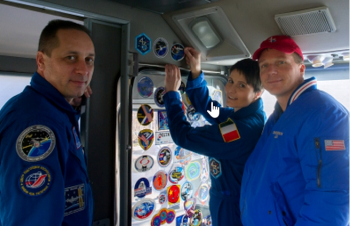 Virts, a US Air Force colonel, joined NASA in 2000 and served as pilot for space shuttle Endeavour’s STS-130 mission to the space station in February 2010.

The flight delivered the Tranquility module and the famous Cupola to the orbital outpost. Virts has logged 13 days and 18 hours of spaceflight.

ESA astronaut Cristoforetti is a native of Milan, Italy – and was assigned to the Futura mission more than two years ago.

She has logged over 500 hours in military aircraft and is now a captain of the Italian air force.

Italy has a rich history of sending astronauts into space, and Cristoforetti is becoming the seventh Italian astronaut – after Franco Malerba, Maurizio Cheli, Umberto Guidoni, Roberto Vittori, Paolo Nespoli and Luca Parmitano. However, she is the first female astronaut from Italy.

Sunday’s launch was another fast-track six hour launch-to-docking mission, first carried out for a crewed mission by Soyuz TMA-08M.

Via what is now a well-practised procedure, the improvement to the transit time was initially demonstrated on a number of Progress resupply missions.

Thus, being able to go from the ground to the ISS in a single day is a big advantage to Soyuz crews.

Following the launch of the Soyuz FG rocket – along with a successful orbital insertion shortly thereafter – the Soyuz TMA-15M was immediately tasked with performing the first two engine burns on its first orbit of the Earth, which are pre-programmed into the Soyuz’s on-board computer prior to launch.

During the previous Soyuz TMA launch, the port Solar Array did not deploy. The spacecraft still docked nominally despite this condition. This Soyuz did not suffer any similar issues.

Further burns, such as Dv3 and Dv4, were available to correct booster performance discrepancies, had they been required.

With all priority tasks going to plan with this latest mission, the second orbit allowed for additional orbital parameters to be uplinked from a Russian Ground Site (RGS), ahead of a further eight rendezvous burns that were performed over the following five hours of flight. 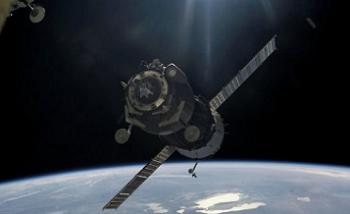 The Soyuz TMA-15M then entered the vicinity of the ISS to aim for a docking to the Rassvet module of the Russian segment of the station.

During the stationkeeping and flyaround, Cristoforetti was heard humming a tune over the loop from inside the Soyuz – something that has never been heard before.

Following the successful docking, hooks and latches were driven to secure the Soyuz firmly to the ISS. Leak checks followed.

Once all checks were complete, the hatches were opened and they were greeted by Expedition 42 Commander Barry “Butch” Wilmore of NASA – who claimed he has photos of their launch from the vantage point of the Station – along with cosmonauts Elena Serova and Alexander Samoukutyaev of Roscosmos, who launched to the station in September.

(L2 is – as it has been for the past eight years – providing full exclusive future vehicle coverage, available no where else on the internet.