An Ariane 5 ECA launched on Saturday evening, lofting two satellites into space. DIRECTV-14 and GSAT-16 rode uphill on the Arianespace workhorse out of the European Spaceport in Kourou, French Guiana. The launch was on schedule at the opening of a 51 minute launch window at 20:40 GMT – following a couple of postponements due to poor weather.

The future of the Soyuz with Arianespace is being evaluated, following the issue with the recently launch of two Galileo satellites that were deployed into the wrong orbit.

The three stage vehicle will be capable of lofting 4.5 ton payloads to polar/Sun-synchronous orbits missions at 800 km altitude and between three and 10 tons on GTO missions.

The vehicle’s main stage utilizes the liquid oxygen and hydrogen Vulcain engine of Ariane 5 ECA and ME, complimented by two – or four – P120 solid rocket boosters, which will be common with Vega-C – an evolution of the current Vega launcher.

It will also sport a cryogenic upper stage (LOX/LH2) propelled by a Vinci engine, based on the A5ME upper stage, with limited adaptations.

Ariane 6 in its A62 (for two boosters) or A64 (for four boosters) configuration was deemed to be the “best possible long-term solution to maintain competences in Europe and deliver launch services against competitive costs” according to ESA.

Back with the current workhorse, the Ariane 5, Saturday’s mission came after a couple of delays related to unfavourable weather conditions predicted around the time of launch.

This mission had the designation of Flight VA221 in the company’s numbering system – and was the six Ariane 5 liftoff from the Spaceport this year and the 77th launch of this heavy-lift workhorse.

Ariane 5 delivered a payload lift performance of more than 10,200 kg. during the mission, which included a combined total of some 9,480 kg. for DIRECTV-14 and GSAT-16, plus the launch vehicle’s dual-passenger dispenser system and satellite integration hardware. 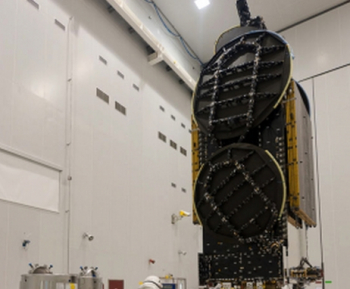 The DIRECTV-14 spacecraft – which was built by SSL (Space Systems/Loral) for operator DIRECTV – is based on SSL’s 1300-series platform. This bird has a liftoff mass of approximately 6,300 kg.

As the seventh satellite to be lofted by Arianespace with a DIRECTV payload, DIRECTV-14 was the mission’s upper passenger and was released first in the flight sequence at nearly 28 minutes after liftoff.

Joining DIRECTV-14 on the flight will be the Indian Space Research Organisation’s (ISRO) GSAT-16 telecommunications satellite.

GSAT-16 – which will weigh approximately 3,150 kg. at liftoff – is set to deliver C- and Ku-band telecommunications services that include very small aperture terminal (VSAT) transmissions, TV broadcasting and emergency communications.

Installed in the vehicle’s lower position, GSAT-16 was the 18th satellite launched by Arianespace for ISRO and was separated at just over 32 minutes after liftoff to complete Ariane 5’s mission.

(Images via Arianespace and ESA).