The Russian workhorse rocket, the Proton M, has conducted its 400th launch in the early hours of Monday, tasked with lofting the Yamal-401 satellite into orbit. The International Launch Services (ILS) mission took nine hours to complete, following launch – at 00:16 UTC – from Pad 24 at the Baikonur Cosmodrome, Kazakhstan.

The Proton vehicle has a deep heritage, with this latest mission marking 400 launches since its inception in 1965. 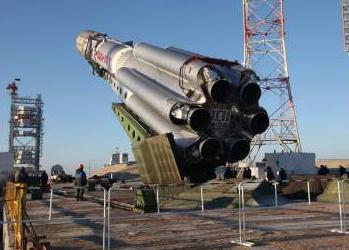 The Proton’s lead designer was Vladimir Chelomei, who designed it with the intention of creating both a powerful rocket for military payloads and a high-performance ICBM. The program was changed, and the rocket was developed exclusively for launching spacecraft.

First named UR-500, but adopted the name “Proton”, which also was the name of the first three payloads launched. Proton’s history includes interplanetary missions to the Moon, Venus, Mars, and Halley’s Comet.

It also launched the Salyut space stations, the Mir core segment and both the Zarya (Dawn) and Zvezda (Star) modules for the current International Space Station.

It is built by Khrunichev Research and State Production Center, one of the pillars of the global space industry and the majority owner of ILS. 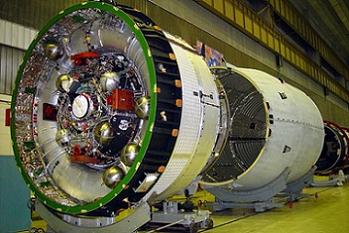 The Briz-M (Breeze-M) upper stage utilizes two new high-pressure tanks (80 liters) to replace six smaller tanks, along with the relocation of command instruments towards the center – in order to mitigate shock loads when the additional propellant tank is being jettisoned.

For this mission, four burns of the Breeze M occurred. The first three stages of the Proton used a standard ascent profile to place the orbital unit (Breeze M upper stage and the Yamal-401 satellite) into a sub-orbital trajectory.

From this point in the mission, the Breeze M performed planned mission maneuvers to advance the orbital unit first to a circular parking orbit, then to an intermediate orbit, followed by a transfer orbit, and finally to a geosynchronous orbit. Separation of the Yamal-401 satellite occurred approximately 9 hours, 1 minute after liftoff.

The orbital location of 90 degrees East will be the home of the Yamal‑401 communications satellite, set to provide services to users in Russia and CIS countries.

Based on the Express-2000A platform, the 2,976 kg satellite is expected to have a service life of 15 years.

As such, the total capacity of the Yamal‑401 satellite will amount to 53 physical transponders or 88 equivalent (36 MHz) transponders, which will compose 1 fixed beam in C‑band covering Russia and CIS countries and 2 fixed beams in Ku‑band (Russian and Northern).

This launch is the eighth ILS Proton mission in 2014. It will also marks the 86th ILS Proton launch overall, the second on behalf of Gazprom Space Systems and the first for an ISS Reshetnev satellite.