India’s new rocket, which the Indian Space Research Organisation (ISRO) refers to by the names GSLV Mk.III and LVM3, is a completely new vehicle marking the third generation for India’s orbital launch systems.

The two-stage rocket is designed to place around 10 tonnes (9.8 Imperial tons, 11 US tons) of payload into low earth orbit or four tonnes (3.9 Imperial tons, 4.4 US tons) to a geosynchronous transfer orbit.

For Thursday’s mission only the first stage and boosters were live, while the inert second stage was loaded with liquid nitrogen to simulate propellant.

India made its first attempt to launch a satellite on 10 August 1979, with its Satellite Launch Vehicle (SLV) carrying the Rohini Technology Payload, or RTP, in a launch from the Sriharikota Range (now known as the Satish Dhawan Space Centre).

Control of the rocket was lost following a valve failure in the second stage thrust vectoring system, with the rocket falling into the bay of Bengal.

India’s first successful launch came on 18 July in the following year, with the second Satellite Launch Vehicle orbiting the Rohini or RS-1 satellite.

In all, four Satellite Launch Vehicles were flown, with the third flight a failure and the fourth, in April 1983, a success.

With a capacity of only around 40 kilograms (90 lb) the SLV was unable to carry any significant payloads so an upgraded version, the Augmented Satellite Launch Vehicle (ASLV) was introduced.

Based around the SLV, the ASLV added two more solid motors, burning together as the rocket’s first stage, to the sides of the vehicle. A modified version of the four stage SLV served as the second, third, fourth and fifth stages of the ASLV.

The ASLV made its first flight from a new complex at Sriharikota, located close to the SLV pad, on 24 March 1987. The first two launches failed to achieve orbit, while the third left ISRO’s SROSS-C satellite in a lower-than-planned orbit.

Funding for the ASLV was cut in favour of the more capable Polar Satellite Launch Vehicle which by then under development, with the final ASLV launch on 4 May 1994 successfully carrying SROSS-C2 into orbit.

The PSLV began a new generation for India’s rockets; the only significant commonality PSLV and its predecessors was the use of S-9 motors – which had made up the first stage of the SLV and the first and second stages of the ASLV – as boosters attached to its first stage.

Far larger than its predecessors, the PSLV introduced a large solid first stage, with liquid second and fourth stages and another solid for the third stage. In its standard configuration it can place up to 3,700 kilograms (8,200 lb) of payload into low Earth orbit.

Having made 28 launches since September 1993, the PSLV has been used for two thirds of India’s orbital launches to date. In addition to being India’s most-flown rocket it is also the country’s most reliable, having suffered only one failure – during its maiden flight – and one partial failure in two decades of service.

Two additional configurations, the PSLV-CA (or Core Alone) and PSLV-XL have been developed to accommodate smaller and larger payloads respectively. The Core Alone configuration eliminates the boosters from the first stage, while the PSLV-XL replaces them with larger S-12 motors.

The most recently-developed orbital launch system in India’s fleet is the Geosynchronous Satellite Launch Vehicle, or GSLV. This vehicle was introduced in 2001 with the aim of enabling India to deploy its own communications satellites without relying on foreign rockets – providing a payload capacity of up to 2,200 kilograms (4,900 lb) to geosynchronous transfer orbit.

Based on the PSLV, it replaces the solid rocket boosters with larger liquid boosters and introduces a cryogenically-fuelled third stage. Early flights of the GSLV Mk.I used a Russian KVD-1M engine on the third stage, however the Mk.II configuration, first flown in April 2010, has an Indian-built engine in its place.

Despite ISRO’s hopes for the vehicle, the GSLV has proven unreliable with a success rate of only 37.5 percent. Only three of its eight launches to date have reached their planned orbits, with one additional launch reaching a usable, though lower-than-planned, orbit. January’s successful deployment of GSAT-14 was the GSLV’s first flawless mission in almost ten years.

The first stage, or L110, is powered by two Vikas engines, derived from France’s Viking series used on Ariane rockets between 1979 and 2004. Burning Unsymmetrical dimethylhydrazine (UDMH) propellant oxidised by dinitrogen tetroxide (N2O4), the L110 will be air-lit almost two minutes after the rocket lifts off under the power of its two booster rockets.

Each of the two S200 boosters will burn 207 tonnes (204 Imperial tons, 228 US tons) of solid propellant – a mixture of ammonium perchlorate, aluminium and hydroxyl-terminated polybutadiene (HTPB).

The rocket’s second stage, which was not tested on Thursday’s mission, is designated the C25. It was powered by a CE20 engine burning liquid hydrogen and liquid oxygen; however for the maiden flight the second stage was inert, loaded with liquid nitrogen to simulate propellant.

The name of the new rocket remains unclear, with ISRO continuing to refer to the rocket as both the LVM3 and GSLV Mk.III.

The payload for Thursday’s maiden launch was the Crew Module Atmospheric Reentry Experiment (CARE), which demonstrated the crew capsule which ISRO has been developing for its manned programme. The primary objective of CARE’s mission wa to validate the reentry and recovery of the prototype spacecraft.

The 3,735-kilogram (8,234 lb) spacecraft flew without the service module that will eventually accompany it on manned missions; instead it was attached to the second stage of its carrier rocket upside-down, inside the payload fairing.

By launching upside-down, ISRO aim was to simplify the CARE mission and increase the chances of success; eliminating the risk of having to modify the capsule’s heat shield to interface with the rocket and removing the need for the spacecraft to manoeuvre to reentry attitude following launch.

With the CARE mission, ISRO’s manned vehicle became the second such spacecraft to undergo a flight test this month; on 5 December NASA launched its Exploration Flight Test 1 mission to demonstrate its Orion spacecraft.

Although a more sophisticated flight than CARE, with the Orion spacecraft making two orbits of the Earth and entering at greater velocity from a higher apogee, EFT-1 had similar objectives to India’s mission – testing the spacecraft’s performance during reentry and validating recovery procedures.

The GSLV Mk.III launched from the Second Launch Pad (SLP) at the Satish Dhawan Space Centre, a complex constructed in the early 2000s for the PSLV and GSLV Mk.I. Thursday’s was the thirteenth launch from the pad, which was first used for the May 2005 launch of CartoSat-1 on a PSLV.

The second pad has been used for all GSLV launches since its completion, along with a handful of PSLV launches. The majority of PSLV missions are conducted from the nearby First Launch Pad.

For launches from the second pad, rockets are assembled vertically atop a mobile platform in an integration building about a kilometre southwest of the launch pad. The GSLV Mk.III prototype was rolled out a week ahead of launch to allow testing and rehearsals to be conducted in advance of liftoff. 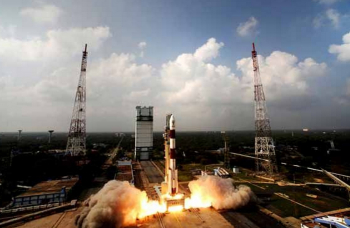 The Satish Dhawan Space Centre, which was formerly known as the Sriharikota Range, is named after former ISRO chairman Satish Dhawan. The facility was renamed in 2002 following the death of Dhawan in January of that year. It has been the site for all of India’s orbital launches. A third launch pad is currently under construction at the site to accommodate future missions, particularly for India’s manned space programme.

The rocket that flew Thursday’s mission has been designated GSLV Mk.III X1, or LVM3-X1. It flew in what ISRO consider a typical GSLV Mk.III flight profile up to the end of first stage flight, after which a series of simulated flight events occurred and the CARE spacecraft was deployed for its reentry experiment.

The launch began when the countdown reached zero, with ignition of the two S200 solid rocket motors. The rocket climbed away from its launch pad, flying on an azimuth of 120 degrees.

The first stage engines ignited 114.71 seconds after liftoff, at an altitude of 43.43 kilometres (26.99 miles, 23.45 nautical miles). The boosters burned together with the first stage until the 148.98 second mark in the launch, at which point they separated from the vehicle. Each booster was fitted with six separation motors which fired to take it clear of the core vehicle.

Three minutes and 52.7 seconds after liftoff the payload fairing separated from around the CARE spacecraft. The GSLV Mk.III used a fairing with a diameter of five metres (16 feet) designed to encapsulate the payload and protect it from atmospheric friction during its ascent to space.

The GSLV accelerated CARE to a velocity of around 5.3 kilometres per second (3.3 miles per second, 12,000 mph) and a projected apogee of 126 kilometres (78 miles, 68 nautical miles), plus or minus one kilometre, which was achieved around the time of stage separation.

Immediately after separating from the rocket, CARE activated its control systems, consisting of six reaction control system thrusters each capable of delivering 100 newtons of thrust. The RCS was used to provide three-axis control, guiding the spacecraft for the first two minutes and eleven seconds of free flight, before being deactivated around the time of entry interface as the spacecraft performed an unguided ballistic descent.

Following entry interface, deployment of CARE’s drogue parachutes occurred nine minutes and 40 seconds into the mission, at an altitude of 15.4 kilometres. The drogue chutes slowed the capsule as it continued its descent, until the main parachutes were deployed around 202 seconds later with the spacecraft three kilometres above the Indian Ocean.

Splashdown occurred around 180 kilometres south of the Andaman and Nicobar Islands, where CARE will be recovered by the Indian Coast Guard. In all the mission lasted nineteen minutes from liftoff to splashdown.

Thursday’s mission concluded ISRO’s launch activities for 2014, following four successful orbital launches earlier in the year. The Geosynchronous Satellite Launch Vehicle began the year on 5 January with the deployment of GSAT-14 – the first successful launch of the GSLV Mk.II and the first for any GSLV configuration since 2004, ending a string of four consecutive launch failures.

India’s first launch next year will be of a PSLV-XL with another IRNSS spacecraft. This will be the first of several IRNSS launches in 2015, with missions to deploy a trio of British imaging satellites and ISRO’s AstroSat astronomy spacecraft also tentatively planned.

A development flight of the GSLV Mk.II is scheduled for around the end of the first quarter, carrying the GSAT-6 military communications satellite.

The GSLV Mk.III is not expected to fly again until 2016 or early 2017, when the rocket will make its first orbital flight – designated D1 – with the GSAT-19E spacecraft.