Alarms in the US section of the International Space Station – pointing to a potential, but likely false indication of an ammonia leak – resulted in the two Americans and one European astronaut evacuating into the Russian section of the orbital outpost. It is currently believed bad sensor data – as opposed to an actual leak – was to blame. The crew returned from a camp out in the Russian section later in the day.

The Expedition 42 crew members were just beginning the opening tasks of their orbital operations on Wednesday, when alarms sounded on the ISS at around 9 am UTC.

The indication on the ground was relayed as increased pressure inside the water loop of Thermal Control System Loop B – one of two redundant cooling loops.

Alarms on the ISS are not uncommon and are almost always caused by false sensor readings.

However, the data on the ground and resulting alarm on the ISS pointed to an ammonia leak – one of the major risks to a crew on the ISS – resulting in contingency procedures being implemented. This is a conservative procedure, implemented to completely mitigate even the slightly risk to the onboard crew.

A major issue would result in the crew evacuating to the two docked Soyuz spacecraft, allowing them to return to Earth.

Wednesday’s contingency involved the three crew members of the US segment donning protecting masks and evacuating to the Russian segment of the Station – sealing off the two segments at a hatch point – while controllers on the ground began a staged shutdown of some systems in Node 2. 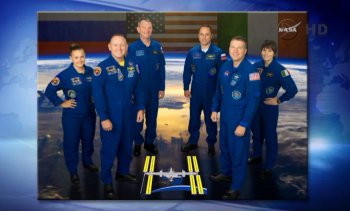 The three crew members currently camped out in the Russian section are Commander Barry Wilmore and flight engineers Terry Virts and Samantha Cristoforetti.

“We’re not entirely convinced this is an ammonia leak. It may be that this is a combination of sensor problems, MDM (relays) and thermal effects all throw together in the exact wrong way to look like it was your classic ammonia leak.”

Ammonia is required on the Station in order to provide cooling to the segments and their array of equipment. 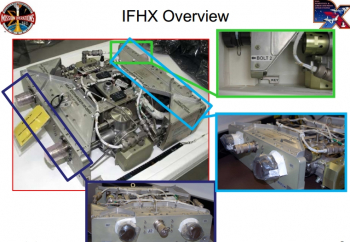 They are located outside the pressure vessel on the endcones of their respective modules.

It is possible for ammonia to enter the ISS via the IFHX since both the external ammonia loop and the internal water loop are connected to the heat exchanger – so if the exchanger fails, ammonia can flow from outside to inside.

In this case, however, it seems the concern is with one of the Node 2 IFHXs that transfers heat from the internal LTL to the external coolant loop B.

IFHXs can be removed and replaced via EVA if completely necessary.

However, all indications point to a healthy system, with data evaluated on the ground by engineers in the ISS Flight Control Room in MCC Houston.

Controllers noted their confidence in the health of the USOC section, allowing for the crew members to return at around 8 pm UTC. However, due to the loss of TCS Loop B, they will need to conduct a camp out in the aft of Node 2.

“Safety of the crew has been achieved through the coordinated and timely actions themselves cosmonauts and astronauts, as well as operational management groups in Moscow and Houston,” added Maxim Matyushin from MCC-Moscow.

No major operations have been hampered by the contingency, with one main task – the unloading of the supplies that arrived on the SpaceX CRS-5 Dragon – already ahead of schedule by the time the alarms sounded.