SpaceX’s CRS-5/SpX-5 Dragon has been captured and berthed by the International Space Station (ISS) on Monday morning, earlier than planned. While a large amount of attention has been focused on the near-success of the first landing of a returning core stage on the Autonomous Spaceport Drone Ship, the primary aim of the mission was always Dragon’s delivery an array of cargo to the orbital outpost.
CRS-5:

The SpX-5/CRS-5 Dragon began her journey to the ISS atop of her Falcon 9 v1.1 partner on Saturday morning.

A quick look management review of the rocket’s ascent phase – and early on orbit operations of the Dragon – noted no issues for the duo.

Dragon herself would be forgiven for wondering why the the eyes of the space flight community were soon focused on the Atlantic Ocean, following her successful foray into Low Earth Orbit. However, that was somewhat understandable, as another Falcon 9 v1.1 core stage conducted a propulsive return to Earth.

While such efforts have taken place over a number of recent missions, this attempt involved the Autonomous Spaceport Drone Ship (ASDS), a landing platform vessel sporting the SpaceX’s logo as a target for the landing legs of the core stage.

The first stage made a valiant effort to hit its mark. However, the return was deemed to be too fast for a secure landing, resulting in the loss of the stage.

Although this allowed for certain mass media outlets to show a complete lack of understanding of the pre-announced odds relating to a successful landing, the reality is this attempt has provided another step forward for SpaceX’s ambitions of returning core stages for reuse.

The ASDS has since returned back to the coast, with photos circulating on social media – and collated in a NSF thread – showing some of the battle scars of a the core stage landing attempt.

SpaceX is understood to have gained some video footage from the event and may release it publicly in time.

Meanwhile, Dragon merrily continued her orbital journey, conducting numerous burns to position herself for Monday’s arrival, with her propulsion system – a set of four “quads” of thrusters – successfully completing a priming phase, ahead of bringing the thruster systems up to operation via the pressurizing the fuel tanks and injection of gaseous helium.

The first burn completed was the coelliptic (CE) burn, with the 350 second firing resulting in a change of velocity of 96 mph.

An “Out Of Plane” burn was followed by the first Height Adjustment burn (HA1), with the 218 second firing resulting in a 34 mph change to the velocity.

Another coelliptic burn (CE1) was followed by two shorter burns, as Dragon chased down the ISS. 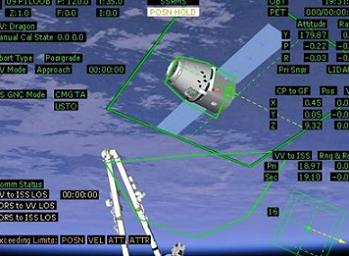 The HA3/CE3 burn pair, using RGPS and configured with the ISS’ own GPS system, was conducted, followed by the HA4 (Ai) burn, taking Dragon inside the corridor where the crew began to monitor the spacecraft’s approach.

With both SpaceX mission control (MCC-X) in California, and NASA’s ISS Flight Control Room (FCR) in Houston monitoring, Dragon continued her approach and hold at 250 meters distance from the Station.

With all systems shown to be nominal, a “Go” to approach 100 meters distance from the Station was given where she automatically paused. The next step was to close in on 30 meters distance. 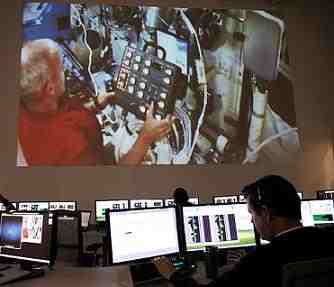 At all points, the ability to abort could have been ordered by controllers on the ground, the Dragon herself and the ISS crew – via the Commercial Orbital Transportation Services (COTS) Ultra High Frequency (UHF) Communication Unit, or CUCU, which rode in the middeck stowage locker on Atlantis during STS-129 late in 2009, before being handed over to ISS crew members ahead of the Dragon flights.

This is a hugely important capability that protects the Station from being impacted by a misbehaving visitor.

Proceeding from 30m to the Capture Point at 10 meters out, Dragon automatically held position again, allowing the ISS’ robotic assets – already translated to the pre-capture position – to make the move towards the Dragon via controls in the RWS inside the Cupola. 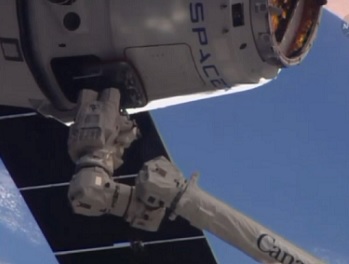 Upon receiving the “Go for Capture” call from Houston, the ISS crew armed the SSRMS capture command and begin tracking the vehicle through the camera on the Latching End Effector (LEE) of the SSRMS, as overviewed in a detailed presentation available in L2 – Link).

With the ISS’ thrusters inhibited and Dragon confirmed to be in free drift, the arm’s LEE was translated over the Grapple Fixture (GF) pin on Dragon to trigger the capture sequence ahead of pre-berthing.

Capture was expected to occur at around 11:12 GMT. However, due to Dragon being ahead of the timeline, approval was given to capture her much earlier than planned at 10:54 GMT.

The Dragon, secured by the SSRMS, was then be carefully translated to the pre-install set-up position, 3.5 meters away from the Station’s module, allowing for the crew to take camcorder and camera footage of the vehicle through the Node 2 windows. 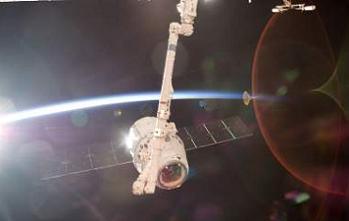 The SSRMS was then be translated to the second pre-install position, at a distance of 1.5 meters out.

Desats were inhibited prior to the translation of the Dragon into Common Berthing Module (CBM) interface to begin the securing of the spacecraft to the ISS. 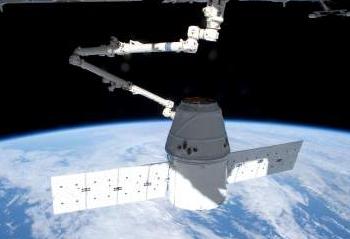 As has been seen with previous Dragon arrivals – and indeed new additions to the Station itself – the spacecraft will be put through first stage capture tasks, allowing the SSRMS to go limp, ahead of second stage capture that officially mark Dragon’s berthing with the ISS at 13;56 GMT.

Berthing operations were completed around two hours after the initial grapple.

With all of the ISS berthing milestones part of the pre-planned schedule, the ISS crew then decided when to open the hatch to the Dragon, which can vary depending on the allowances in the crew’s timeline.

This was conducted over the following 12 hours, with unpacking operations beginning on Tuesday morning.

Dragon’s cargo will support more than 250 experiments that will be conducted by the station’s Expeditions 42 and 43 crews.

As had been predicted, some of the Dragon’s payload manifest was refined to reflect the near term needs of the ISS, based on what was lost during the recent failure of the Antares rocket during the launch of the CRS-3/OrB-3 Cygnus.