The MUOS-3 spacecraft that was launched on Tuesday is MUOS Space Vehicle 4 (SV-4), the fourth production satellite, which was launched out of sequence after the SV-3 satellite was found to be defective.

As a result of a ground test conducted under vacuum conditions, some of the soldering work on its ultra-high frequency antennae was found to be unsuitable. SV-3 is undergoing repairs ahead of its planned launch this August as MUOS-4.

Operated by the United States Navy, the Mobile User Objective System (MUOS) is a successor to the UHF Follow-On (UFO) satellites launched between 1993 and 2003. Itself a successor to the earlier FLTSATCOM and Leasat constellations, the UFO series consisted of eleven satellites constructed by Hughes and later Boeing, which were deployed by Atlas I, II and III rockets.

Once complete the MUOS constellation will consist of five satellites; the last of which is scheduled for launch in July 2016. The prime contractor for the programme is Lockheed Martin, who have based the spacecraft around the A2100M bus.

Boeing constructed the legacy components of the satellites’ communications payloads, derived from the UFO spacecraft and designed to provide support for systems using the existing satellites. 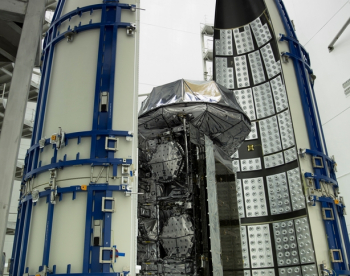 Each MUOS satellite has a mass of around 6,740 kilograms (14,900 lb). The satellite will take up station in geostationary orbit providing mobile voice and data communications to US military units in the field. Once fully operational the US Navy expects the MUOS constellation to provide ten times the throughput of the UFO system.

The first satellite was launched in February 2012 with the second following it into orbit in July 2013. Following Tuesday’s launch two more satellites will be orbited – the first in August and the second next July – to complete the constellation.

All five MUOS launches make use of United Launch Alliance’s Atlas V rocket, flying in the 551 configuration. The largest and most powerful Atlas V to be developed, the 551 consists of a two stage core vehicle augmented at liftoff by five solid rocket motors, with a five metre payload fairing encapsulating the second stage and payload. 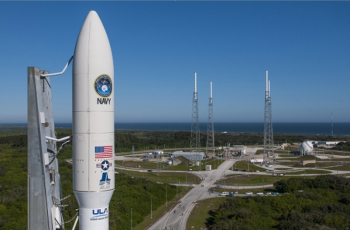 The vehicle used for Tuesday’s launch was AV-052; the fifty second Atlas to launch and the fifth to make use of the 551 variant.

The Atlas V made its first flight in August 2002 when it launched Eutelsat’s Hot Bird 6 spacecraft. In its missions since then Atlas has primarily served the US Government, placing into orbit spacecraft for the military and for NASA interspersed with occasional commercial missions.

The spacecraft carried by the Atlas V include NASA’s New Horizons mission which is due to fly past Pluto later this year, the Mars Reconnaissance Orbiter and MAVEN spacecraft currently orbiting the Red Planet and the Curiosity rover on the surface, the Juno mission which will reach Jupiter next year and the Lunar Reconnaissance Orbiter and LCROSS missions to the Moon.

Missions for the US military have included three flights of the X-37B Orbital Test Vehicle, three deployments of GPS navigation satellites, an array of communications satellites and several missions for the National Reconnaissance Office

The Atlas V 551 was first used in January 2006 to deploy New Horizons. It was subsequently used for the August 2011 launch of Juno and to orbit the two previous MUOS satellites. 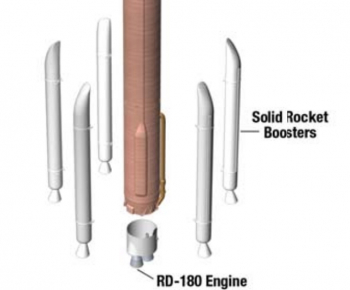 The first stage of the Atlas V is a Common Core Booster (CCB). Powered by a single RD-180 engine manufactured by NPO Energomash the CCB is fuelled by RP-1 propellant oxidised by liquid oxygen.

For the first minute and a half of the flight five solid rocket motors, developed by Aerojet, provided additional thrust. The rocket’s second stage is a Centaur, propelled by a single RL10 engine burning liquid hydrogen and liquid oxygen. For Tuesday’s launch the RL10C-1 engine, debuted on December’s NROL-35 mission, was used.

The flight of AV-052 marked the 200th flight of an Atlas rocket with a Centaur upper stage. The first cryogenically-fuelled rocket stage to be developed, the Centaur first flew on 8 May 1962 atop a modified Atlas D rocket designated the LV-3C.

The first flight, a suborbital test, was unsuccessful due to the loss of an insulation panel early in the mission which caused the Centaur to overheat and explode. Despite a number of early failures the Atlas-Centaur grew into a workhorse of the US space programme.

In addition to its use on the Atlas, Centaur stages have also flown atop Titan rockets, making seven launches as part of Titan IIIE rockets, and sixteen Titan IV missions. Plans to fly the Centaur on the Saturn I rocket and the Space Shuttle were abandoned at late stages of development. Coincidentally the first MUOS launch, in 2012, marked the launch overall for the Centaur.

On Tuesday’s mission, AV-052 flew from Space Launch Complex 41 (SLC-41) at Cape Canaveral. A former Titan launch complex, SLC-41 was redeveloped for the Atlas V in the late 1990s ahead of the rocket’s entry into service.

The Atlas V made its maiden flight from SLC-41 in 2002, with the pad replacing the older Space Launch Complex 36 which – aside from three Atlas II launches out of Vandenberg – was used for all missions flown by earlier Atlas-Centaur configurations.

When flying from SLC-41 the Atlas V is assembled atop a mobile platform in the Vertical Integration Facility (VIF), located about half a kilometre (600 yards) southeast of the pad. The platform and fully-assembled rocket are then transported by rail to the pad. For AV-052 this rollout took place Monday morning.

This led to the build up to full thrust in the final 2.7 seconds of the countdown, with ignition of the solid rocket motors and liftoff occurring about a tenth of a second after the countdown reaches zero.

Ascending quickly, the Atlas V began to manoeuvre to the correct attitude for its ascent to orbit, along a launch azimuth of 94.58 degrees, around 3.9 seconds after liftoff.

At the 51.2 second mark into the mission the vehicle encountered the area of maximum dynamic pressure, or Max-Q.

Burnout of the five solid rocket motors occurred at around ninety seconds elapsed time, with the spent motors remaining attached for about twenty seconds after depletion. The first pair jettisoned 110.7 seconds after launch, with the remaining three separating a second and a half later.

Separation of the payload fairing from around the Centaur and MUOS satellite took place three minutes and thirty three seconds into the mission with the Forward Load Reactor, a device which attaches at the top of the Centaur to dampen vibrations within the fairing, separating from the rocket five seconds later.

The Common Core Booster completed its mission four minutes and 27.6 seconds after liftoff with Booster Engine Cutoff, or BECO. At this point the stage exhausted its fuel supply and was discarded six seconds after cutoff.

The Centaur entered its prestart sequence with ignition of its RL10C-1 engine coming ten seconds after staging. The first of three planned RL10 burns lasted seven minutes and 46.8 seconds to establish an initial parking orbit.

Following the end of the Centaur’s first burn, the mission entered an eight-minute, 2.1 second coast phase at the end of which the stage reignited its engine for a five minute and 46.2 second burn to establish a geosynchronous transfer orbit.

From this transfer orbit the spacecraft will raise itself into an operational geostationary regime through several firings of its apogee motor – a BT-4 engine developed by Japan’s IHI Aerospace.

Tuesday’s launch was the second of 2015 following SpaceX’s successful deployment of a Dragon spacecraft earlier this month using their Falcon 9 rocket.

The launch was the first of nine planned for the Atlas this year and thirteen overall for United Launch Alliance. ULA will next be in action on 29 January, with a Delta II rocket deploying NASA’s Soil Moisture Active Passive (SMAP) satellite into Low Earth orbit.

The next Atlas V launch will be in March, with the 421 configuration being used to place NASA’s four Magnetospheric Multiscale (MMS) satellites into orbit. This will be followed by an unconfirmed military launch in May, which could possibly be the fourth flight of the X-37B spaceplane.

A GPS launch in June will use an Atlas V 401, before two launches in August see the next MUOS satellite carried by an Atlas V 551 followed by a National Reconnaissance Office mission, NROL-55, from Vandenberg.

Another GPS launch will is slated for September before two commercial missions close the year. In October an Atlas V 421 will deliver the Morelos 3 communications satellite to geosynchronous transfer orbit while in November the 401 configuration will be used to deploy a Cygnus spacecraft for Orbital Sciences Corporation on a resupply mission to the International Space Station.

ULA’s remaining Delta launches in 2015 will be Delta IV missions; with a launch from Cape Canaveral in March to deploy a GPS satellite, a launch out of Vandenberg in April with the NROL-45 payload – expected to be a Topaz radar imaging satellite – and a mission from the Cape in July carrying a Wideband Global Satcom communications spacecraft for the US Air Force.