United Launch Alliance (ULA) has successfully conducted a rare Delta II launch on Saturday morning, at 6:22 am local,  following a scrub on Thursday, along with a debonding of insulation on the booster, suffered during the subsequent detanking . The venerable rocket successfully orbited the Soil Moisture Active Passive satellite for NASA.

Soil Moisture Active Passive, or SMAP, is a NASA mission to produce a global map of the moisture content in the Earth’s soil.

During its planned three-year mission the spacecraft will take repeated measurements of the Earth’s surface as it orbits the planet, allowing scientists to study the distribution of water in soil around the world and its role in the water cycle. 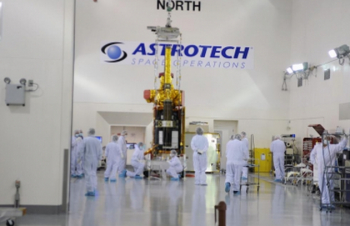 NASA envisions that this data will improve weather forecasts, add to research into Earth’s climate and help with agricultural, resource management and emergency planning.

Development of the SMAP spacecraft was authorised in 2008, based on the Hydros mission which had been cancelled three years earlier.

The SMAP satellite has a mass of 944 kilograms (2,081 lb) and is powered by a three-panel solar array which generates 1.45 kilowatts of power. It will use active and passive remote sensing techniques to infer surface water content from radar backscatter and microwave emissions.

The active element of the spacecraft’s instrument suite is an L-band synthetic aperture radar (SAR) while a radiometer forms the passive component of the payload. A six metre (19.7-foot) mesh antenna will be deployed after launch for these instruments.

The synthetic aperture radar emits signals and then analyses the backscattered signal, determining the water content of the soil from the amount of radiation that it reflects. 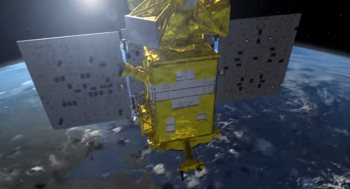 The mission is being conducted by NASA’s Jet Propulsion Laboratory, who constructed the spacecraft in-house apart from the radiometer, which was developed by NASA’s Goddard Space Flight Center.

ExoCube, also known as CP-10, is a three-unit CubeSat flown as a partnership between NASA, the California Polytechnic State University and the University of Wisconsin.

The spacecraft will be used to monitor the density of oxygen, hydrogen and helium atoms and ions, nitrogen molecules and nitrosonium ions in the upper atmosphere.

The CubeSat will use a suite of instruments called EXOS, which consists of a Neutral State Energy Angle Analyzer or NSEAA, an Ion Static Energy Analyzer or ISEAA and a Total Ion Monitor (TIM), to take measurements which its operators hope will contribute to ongoing space weather research.

The second half of a four-satellite constellation these spacecraft will join the FIREBIRD-A and FIREBIRD-B spacecraft orbited by an Atlas V in December 2013. FIREBIRD-B remains operational, however FIREBIRD-A suffered a power system failure six weeks after launch.

The FIREBIRD program, which is funded by the National Science Foundation and the Montana Space Grant Consortium, is led by the Universities of Montana and New Hampshire and is aimed at studying disruptions known as microbursts within the Van Allen radiation belts.

The two satellites are similar to their predecessors, however with a completely new power subsystem and an additional solar cell technology demonstration experiment. 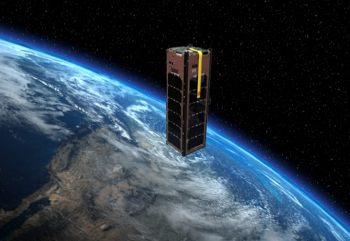 The satellite will take regular spectroscopic measurements of atmospheric pollution as a test of the Read-out Integrated Circuit (RIOC) being developed for the GEO-CAPE mission.

The rocket that launched SMAP was Delta 370, a Delta II vehicle flying in the 7320-10C configuration.

This is a two stage vehicle, consisting of an Extra-Extended Long Tank Thor first stage and a Delta-K second stage. Three GEM-40 solid rocket motors are clustered around the first stage to provide additional thrust at liftoff and for the first minute of flight.

The mission was the 153rd flight of the Delta II and the 130th flight of a 7000-series vehicle, excluding the six Delta II Heavy launches.

The Extra-Extended Long Tank Thor is the final evolution of the Thor missile, which was developed as an intermediate-range ballistic missile during the 1950s, first flying from Cape Canaveral in early 1957.

The stage is powered by an RS-27A engine, burning RP-1 propellant oxidised by liquid oxygen, with two LR101 vernier engines used to control the rocket’s roll.

The three GEM-40 motors are solid-fuelled and designed to give the rocket extra thrust during the early stages of flight when it is at its heaviest and climbing through the thickest part of the atmosphere.

The second stage of the rocket, the Delta-K, is powered by an AJ-10-118K engine.

The stage is restartable, allowing several burns to be made to reach a higher orbit after an initial parking orbit. The engine burns hypergolic propellant; Aerozine-50 is a mixture of hydrazine and unsymmetrical dimethylhydrazine (UDMH) in equal parts by weight. This is oxidised by dinitrogen tetroxide.

The rocket is completed with a three metre (10-foot) composite payload fairing which protects the SMAP vehicle during its ascent through the atmosphere.

The Delta II first flew in February 1989, with its maiden flight orbiting the first operational satellite for the US Air Force’s Global Positioning System (GPS) constellation. Almost a third of Delta II launches have been in support of the GPS program, with 49 satellites placed into orbit between 1989 and 2009.

The launch, which took place from Space Launch Complex 2W at Vandenberg Air Force Base in California, will began with ignition of Delta 370’s first stage main engine and verniers three seconds in advance of liftoff.

When the countdown reached zero the three solid rocket motors ignited and the vehicle rose from the launch pad to begin its ascent into orbit. Flying downrange at an azimuth of 196 degrees Delta 370 reached the speed of sound, Mach 1, 35.8 seconds after liftoff – passing through the area of maximum dynamic pressure fourteen and a half seconds later.

The GEM-40 motors burned for the first minute and 4.7 seconds of flight before exhausting their supply of propellant. The spent boosters remained attached to the first stage for 34.3 seconds after burnout in order to ensure that debris does not hit oil rigs downrange of Vandenberg.

First stage flight concluded with Main Engine Cut-Off, or MECO, four minutes and 21.8 seconds after liftoff, when the RS-27A was shut down. The vernier engines followed suit a few seconds later in an event designated Vernier Engine Cut-Off or VECO. Around 6.2 seconds after MECO the spent first stage separated from the vehicle, with the second stage igniting eight seconds later. 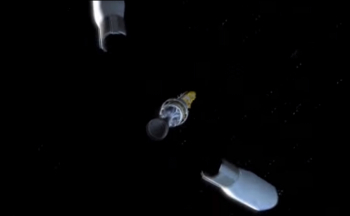 Separation of Delta 370’s payload fairing occurred nineteen seconds into the first of two second stage burns. Six minutes and 7.6 seconds in duration, this first burn established the vehicle in a 185 by 709 kilometre (115 by 440 miles, 99.9 by 383 nautical miles) parking orbit.

The mission then entered a coast phase lasting 40 minutes and 54.4 seconds before the AJ-10 engine restarted for its second burn. Lasting just 12.1 seconds, this second circularisation burn raised the orbit’s perigee in preparation for spacecraft separation which occurred five minutes and 0.4 seconds after its conclusion.

The CubeSats were released at 100-second intervals some time after the end of the third burn – with the two FIREBIRD spacecraft being deployed together from the same PPOD.

The final burn was intended to deorbit the second stage in order to avoid leaving unnecessary debris in orbit. The burn began at 112 minutes and 30 seconds mission elapsed time, with a planned duration of about 48 seconds. About seventeen minutes after this burn ends the spent stage reentered the atmosphere over the south Pacific.

The mission was the only one scheduled for the Delta II this year, as the rocket’s operations are wound down. After the SMAP launch two more missions remain on the Delta II’s manifest, with the March 2017 deployment of the first Joint Polar Satellite System (JPSS) vehicle its next scheduled flight.

The other scheduled Delta II launch will occur later in 2017 with NASA’s ICESat-II spacecraft. Parts exist to construct one further rocket should it be required, although it remains unclear whether this will be used.