The European Space Agency is flying a reentry demonstration mission Wednesday with its Intermediate Experimental Vehicle (IXV). Boosted by Europe’s lightweight Vega rocket, the IXV flew a suborbital mission culminating in landing and recovery in the Pacific Ocean after around 102 minutes of flight. Liftoff is occurred at 13:40 UTC from Kourou, French Guiana.

The Intermediate Experimental Vehicle, or IXV, is a fully-automated technology demonstration spacecraft designed to build on earlier research into atmospheric reentry and serve as a stepping stone to a proposed reusable experimental vehicle.

IXV is the second large spacecraft which ESA has attempted to recover from space, and builds on the Advanced Reentry Demonstrator (ARD) mission, launched on the third flight of the Ariane 5 in October 1998.

ARD was a conical capsule which was retrieved from the Pacific following a 101-minute mission.

Like IXV, this was an experimental mission; ESA has never operated a reusable spacecraft operationally, instead relying on Russian and American spacecraft to carry scientific and technological experiments requiring a return to Earth. 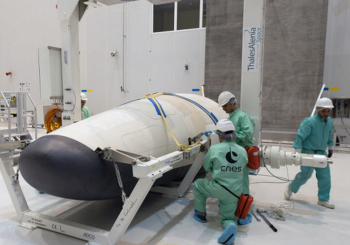 It was constructed for ESA by Italian aerospace company NGL Prime. Jointly owned by Airbus and Finmeccanica, NGL, which stands for Next Generation Launcher, is the prime contractor for ESA’s Future Launchers Preparatory Programme (FLPP), a programme which the agency is undertaking to improve its current-generation rockets and lead into the development of a new generation of vehicles.

While there are no serious plans at present for any of these rockets to be recoverable, the IXV will provide data for the programme and could lead to advances in European spacecraft technology. 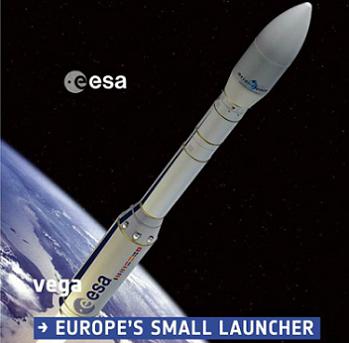 Making its fourth flight, the Vega is a four-stage vehicle designed to carry small satellites into low Earth orbit.

First flown in February 2012, the Vega is the smallest of the three rockets in Arianespace’s fleet, along with the Russian-built Soyuz-ST and the larger Ariane 5.

On its first launch, Vega carried the LARES geodesy research satellite and a collection of CubeSats into orbit, while subsequent launches in May 2013 and April 2014 carried ESA’s experimental PROBA-V Earth observation satellite and Kazakhstan’s KazEOSat-1 imaging spacecraft.

All of the rocket’s flights to date have been successful. 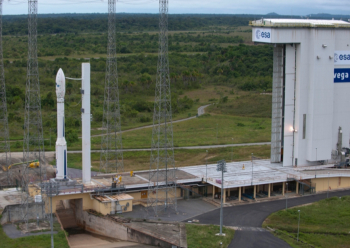 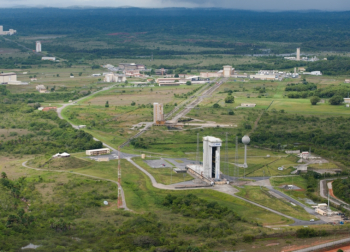 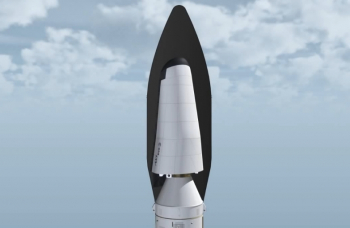 About seven and a half hours before liftoff ESA conducted a series of communications tests between the IXV, its ground stations and mission control.

A full test of the spacecraft’s ground segment took place an hour later followed by a voice communications check at the six-hour, fifteen-minute mark. 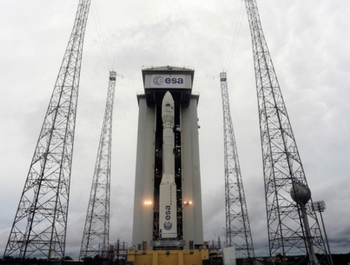 At the four-hour, fifty five minute mark in the countdown the rocket’s computers was powered up and the flight plan was loaded into them.

The rocket’s flight termination system, or Safeguard Master Unit (SMU) in ESA parlance, was powered up at the four hour, fifty minute mark in proceedings.

While these events are taking place, the IXV team conducted a final mission simulation, concluding four hours and forty five minutes before liftoff.

The IXV’s own countdown operations began with three and a half hours to go until liftoff.

At the four hour, twenty five minute mark in the countdown the rocket’s clocks was synchronised to UTC, with alignment and checkout of the guidance system took place five minutes later.

Preparations for retracting the mobile service tower from around the rocket began at the three hour and forty minute mark with engineers clearing the final remove-before-flight safing devices from the rocket.

First motion of the gantry itself began an hour later, with the retraction process taking three quarters of an hour.

Eighty minutes before launch the rocket’s remaining telemetry systems and transponders were activated.

The spacecraft’s ground stations and support segment were placed into launch configuration at the sixty minute point in the countdown, with the rocket reaching launch readiness thirty-four minutes ahead of its planned liftoff.

Following a final weather report at the ten minute mark in the count, the rocket entered its automated terminal count, or “synchronised sequence” for the last four minutes of the countdown. A delay deep into the window occurred due to a telemetry issue. 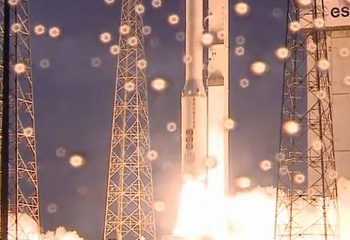 Once the count reached zero, the P80FW motor which powers the first stage ignited and Vega will begin her ascent.

Flying East the rocket headed out over the Atlantic Ocean, with the first stage burning for one minute and fifty seconds before separation and ignition of the second stage two seconds later.

A Zefiro-23, this stage powered the vehicle for 77 seconds.

A further twenty six seconds after burnout, the spent stage separated and the Zefiro-9A third stage ignited to begin its 119-second burn.

Twenty seven seconds into third stage flight, at an altitude of 117 kilometres (72.7 miles, 63.2 nautical miles), the payload fairing separated from around the IXV. 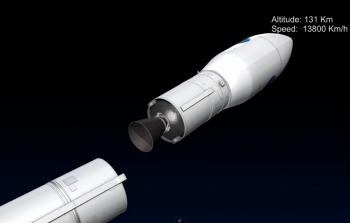 The first three stages of the rocket are all solid-fuelled, burning hydroxyl-terminated polybutadiene (HTPB) 1912 propellant. Vega’s fourth stage, and the only one to use liquid propellant, is the Attitude and Vernier Upper Module, or AVUM.

Designed to improve the precision of Vega’s orbital insertion by providing fine control during the final stages of launch, the AVUM is powered by a Ukrainian-built RD-869 engine burning unsymmetrical dimethylhydrazine oxidised by dinitrogen tetroxide.

The stage is tasked with three burns during Wednesday’s mission; the first to establish the IXV on its planned trajectory while the second and third will occur after spacecraft separation as tests of the stage. 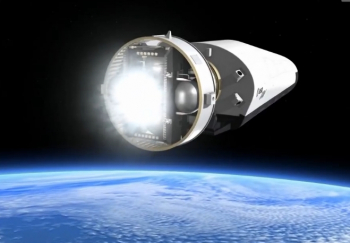 Following the jettison of the spent third stage, six minutes and 37 seconds after liftoff, the Vega coasted until ignition of the AVUM at eight minutes mission elapsed time. 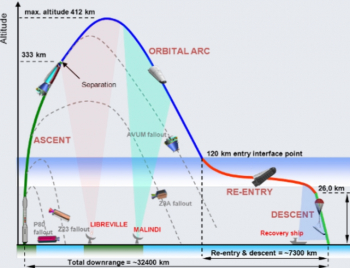 While this could technically be termed an orbit, since the perigee of the trajectory lies above the surface of the Earth, it intersects the atmosphere such that the IXV will reenter before completing its first revolution.

Such a transatmospheric orbit is generally considered to be a suborbital, rather than orbital, mission.

Shortly after separation, a tracking station in Libreville, Gabon, acquired the spacecraft’s signal. About three and a half minutes into free flight the spacecraft’s reaction control system were primed to provide attitude control during the mission. 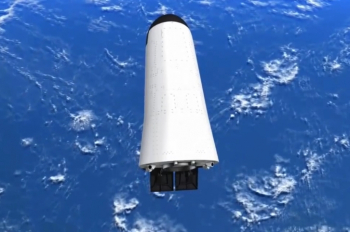 Handover of the spacecraft’s tracking from Libreville to Malindi, Kenya took place between 23 and 25 and a half minutes after liftoff, with Malindi providing tracking until the expected loss of signal around 34 minutes and 12 seconds mission elapsed time.

The IXV ascended to its apogee before descending towards reentry. The spacecraft was not expected to be heard from again until after it has reentered the atmosphere, with a tracking ship picking up its signal at one hour and 22 minutes into the flight.

Three minutes after the acquisition of signal the spacecraft ejected the panel covering its parachute bay and deploy a pilot parachute followed by the first of two drogue chutes. 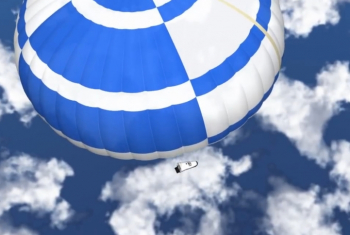 Designed to slow the spacecraft from supersonic speed, this first drogue separated, pulling out a subsonic drogue chute which continued to slow the vehicle.

Four minutes after the panel separated, the main parachute deployed.

Descending under parachute, the IXV was safed two minutes after the main chute deployed, with splashdown in the Pacific Ocean occurring slightly ahead of the one hour and forty two minutes mission elapsed time scheduled timeline. 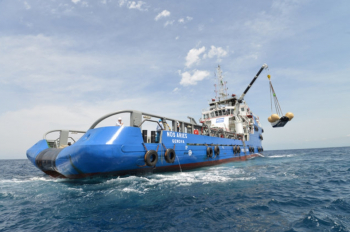 The IXV deployed floatation balloons to keep itself on the surface for recovery by ship.

Wednesday’s launch was the first of the year for Arianespace whose next mission will be the deployment of two Galileo navigation satellites via Russia’s Soyuz rocket on 27 March.

The next Vega launch, carrying the Sentinel-2A Earth science satellite for ESA, is scheduled for mid-June while a further mission is scheduled for September with the LISA Pathfinder technology demonstration mission, also for ESA.