The impressive Thor 7 satellite will set sail for French Guiana next week, following the completion of its manufacture and testing at Space Systems/Loral (SSL). Designed and built for Telenor Satellite Broadcasting (TSBc), Thor 7 will join SICRAL 2 for a ride uphill atop the Ariane 5 rocket, set to launch out of this European Spaceport in Kourou on April 16.

Arianespace have already kick-started a busy year, marked most recently by the successful IXV mission, launched via the baby of its rocket fleet, Vega.

Her big sister, Ariane 5, is the workhorse of Arianespace, with Flight VA222 set to loft another dual payload mission. 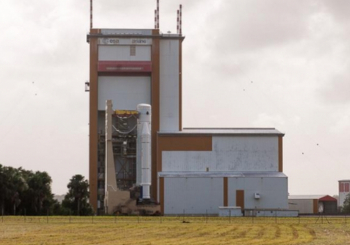 The stages that make up the launch vehicle arrived at the spaceport in October, aboard the MN Toucan, ready for integration and processing. The “headless” Ariane 5 booster was then rolled from the BIL to the BAF building on January 19, ready to receive her two passengers.

The lower passenger will be SICRAL 2, set to become part of Italy’s military satellite communications system.

This geostationary satellite will operate in the UHF and SHF bands, with the ability to enhance the capability of military satellite communications already offered by SICRAL 1 and SICRAL 1B and by France’s Syracuse System.

Separated by the SYLDA (SYstème de Lancement Double Ariane), Thor 7 will ride as the upper passenger during this launch.

The spacecraft’s Ka-band High Throughput Satellite (HTS) payload will offer 6-9 Gbps throughput with up to 25 simultaneously active spot beams – providing high powered coverage over the North Sea, the Norwegian Sea, the Red Sea, the Baltic Sea and the Mediterranean. 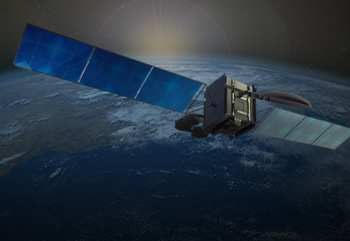 The satellite also has a Ku-band payload for broadcast and television services in Central and Eastern Europe.

THOR 7 is built on the SSL 1300 platform, with the company announcing on Thursday that the spacecraft has successfully completed its testing and is now ready to ship to Kourou to meet up with the Ariane 5.

“SSL and Telenor Satellite Broadcasting share a commitment to providing satellites and services that improve the human experience,” said John Celli, President of SSL. “We are pleased that THOR 7 is ready to ship and we look forward to working with TSBc and Arianespace on the final preparations for launch.” 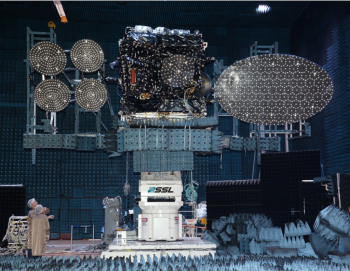 THOR 7 was designed with up to 25 “simultaneously active” Ka-band spot beams and a steerable beam. Its Ku-band payload includes 11 transponders.

When launched, THOR 7 will be positioned at 1 degree West longitude and is designed to provide service for 15 years or more.

“With the launch of THOR 7, our growth satellite, we look forward to further extending our position in the market and expanding our European coverage.”