NASA astronaut Barry Wilmore – along with flight engineers Alexander Samokutyaev and Elena Serova – bid farewell to their six month tour on the International Space Station (ISS) arrived home aboard their Soyuz TMA-14M spacecraft on Wednesday. Their mission concluded with a parachute-assisted – loss-of-communication drama – landing on the steppe of Kazakhstan early on Thursday morning local time.

Wilmore, Serova and Samokutyaev arrived at the Station in September of last year and served as flight engineers for ISS Expedition 41 until November – at which time Wilmore assumed command of Expedition 42.

Their return completed 167 days in space on a mission covering almost 71 million miles.

This was Serova’s first flight into space.

“Butch” Wilmore was also involved in three major spacewalks near the end of his tour of duty with the orbital outpost. 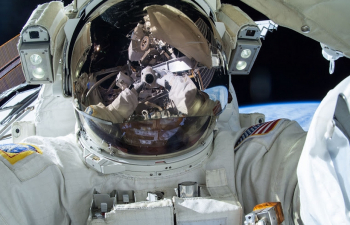 Along with Terry Virts, the EVAs successfully set the stage for the arrival of future cargo and crew vehicles – most notably SpaceX’s Dragon 2 and Boeing’s CST-100 that will begin to arrive as early as 2016 or 2017 – depending on their development schedules.

In preparation for that safe trip home, the Soyuz TMA-14M crew donned their Sokol launch and entry suits, closed the hatch between the Orbital Module (BO) and Descent Module (SA), and strapped themselves into their Kazbek couches inside the SA.

Following undocking, the Soyuz enjoyed a few hours of free flight as it departed from the Station’s neighborhood.

“We wish you a good flight and a soft landing,” was the message between the separating crews. 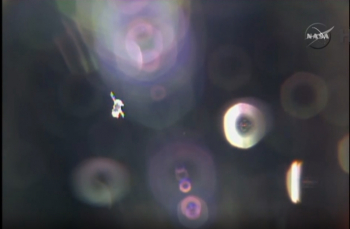 The departing Soyuz also gained some amusing comments about seeing both arrays – given this was the Soyuz which arrived with just one array deployed. The second array decided to deploy – almost comically – after docking.

The deorbit burn was the next key milestone of the return leg, conducted around one hour ahead of landing.

The burn took four minutes and 41 seconds to complete, reducing the Soyuz’s velocity just enough for it to begin the plunge back to Earth. This was not immediately confirmed due to a loss of communications, which became more dramatic as the blackout continued – prior to the relief of the re-establishment of audio with the crew. 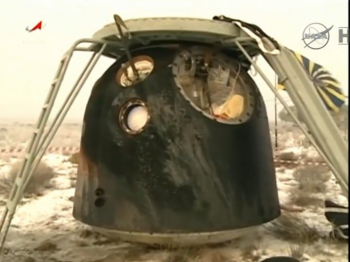 The Soyuz then “eased” – the reality is a rather bumpy return – its way to the ground under parachute, ahead of a landing southeast of Dzhezkazgan – with touchdown also taking a while to confirm, due to low clouds and heavy fog in the recovery area.

The next immediate task involved the extraction of the crew from the SA by the Russian recovery forces that raced to the Soyuz’s aid.

The crew were transferred almost immediately on to special chairs, where medical checks were conducted, ahead of being moved to a medical tent by all terrain vehicles to prepare them for transit. 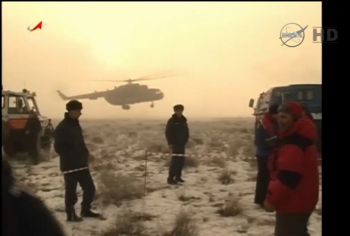 However, they were instead loaded on to MI-8 helicopters and flown to a nearby airfield, where the crew will part ways.

Samokutyaev and Serova will be flown back to Star City, while Butch Wilmore will board a NASA Gulfstream III aircraft and flown back to Ellington Field in Houston, Texas – via two refuelling stops in Glasgow, Scotland, and Goose Bay, Canada.

At the time of undocking, Expedition 43 officially will begin aboard the station under Terry Virts’ command.

Along with his crewmates Anton Shkaplerov of Roscosmos and Samantha Cristoforetti of ESA (European Space Agency), the three-person crew will operate the station for two weeks until the arrival of three new crew members.

NASA astronaut Scott Kelly and Russian cosmonauts Mikhail Kornienko and Gennady Padalka, are scheduled to launch from Baikonur, Kazakhstan at end of the month.

This will be a hugely historic mission, with Kelly and Kornienko scheduled to spend a year aboard the complex collecting valuable biomedical data that will inform future deep space, long-duration missions.

Long duration impacts on the human body and mind are deemed to be one of the biggest non-engineering challenges of sending people to the surface of Mars.

(Images via NASA and Roscosmos)