Both of the iconic pads at the Kennedy Space Center (KSC) are being revamped for their roles with new launch vehicles. Pad 39B is set to receive additional Catacomb Roof reinforcements to cope with the massive SLS Block 1B rocket, while Pad 39A’s landscape continues to change with modifications at the pad and the construction of a new Horizontal Integration Facility (HIF).
Pad Revamp – 39B:

Pad 39B is preparing for its future with the Space Launch System (SLS), the next chapter in the complex’s history that ranges back as far as the Apollo Program.

Some elements of 39B still date back to the era of crewed space flight missions to the Moon.

Its main role involved hosting Space Shuttles ahead of their missions, resulting in a bittersweet period where its familiar appearance of its Fixed Service Structure (FSS) and Rotating Service Structure (RSS) were pulled down to create a “clean pad”.

This approach will involve its new tenant arriving atop the Mobile Launcher (ML) system, transported from the Vehicle Assembly Building (VAB) by a refurbished “Super Crawler”, prior to being hooked up to the new pad assets that have been added over recent years.

Although the pad structures no long rise high into the coastal skyline, 39B now has a steel and concrete structure that houses two elevators and the associated machinery, ready to provide the electrical and fluid assets for SLS once she arrives at the complex.

SLS will “evolve” over time, opening with the Block 1 (70mT) variant that will be used on a test flight currently scheduled for the second half of 2018.

SLS will eventually evolve into the Block 2 (130mT) monster that will be capable of lofting huge payloads into orbit ahead of their missions to Mars. 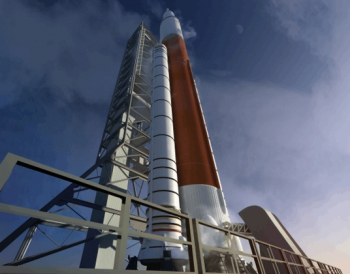 While the realization of that huge rocket will be at the mercy of lawmakers, not least from funding viability standpoint, it is now almost certain the SLS workhorse of the 2020s will be the “interim” Block 1B, capable of multi-mission objectives with a 105mT+ rating.

The timeline for the Block 1B, which is set to come online prior to the middle of the next decade, has resulted in NASA’s Ground Systems Development and Operations (GSDO) and Exploration Systems Programs evaluating the capability of Pad 39B’s structures.

The Block 1B will be much heavier than the Block 1, requiring the pad complex to be able to host such a large mass ahead of a launch. The rating is classed as ensuring the complex can deal with over 25 million pounds of rocket and associated hardware.

Engineers have targeted the Catacomb Roof at 39B as an area that will require reinforcement ahead of being able to cope with a Block 1B SLS arriving for her pad flow and launch.

When the pads at Launch Complex 39 were constructed, the flame trench and deflector were built above the ground.

The catacomb roof provides the structural capability to support the combined weight of the crawler, the mobile launcher and the vehicle as they are transported up the slope to the top of the pad.

The surface panels and catacomb roof are separated by two inches of sand and five inches of lightweight concrete. Over the years, water seeped through the panel joints and accumulated between the top of the catacomb roof and the bottom of the panels.

Work was conducted in 2013, requiring 176 panels, each weighing about 30,000 pounds, removed via forklift, before the structural roof of the catacomb was repaired.

However, additional work will be required for the Block 1B version of SLS.

“The Pad team completed the design for the Catacomb Roof Reinforcement Project,” added L2 notes. “The overall scope of this project is to reinforce the catacomb roof and increase its loading capacity from 21-million pounds to 25.5-million pounds, in anticipation for the heavier SLS Block 1B configuration launch vehicle.”

This work is likely to be conducted over the next 12 months.

While work at 39B has been ongoing for several years, 39A’s revamp is progressing at a much higher pace.

Since taking over the stewardship of the historic pad on a 20 year lease, SpaceX has been busy working around the existing Shuttle structures to prepare the complex for the debut launch of its Falcon Heavy rocket.

Most of the visible work is taking place at the perimeter of the pad complex, with SpaceX’s new Horizontal Integration Facility (HIF) building making speedy progress during its construction phase. 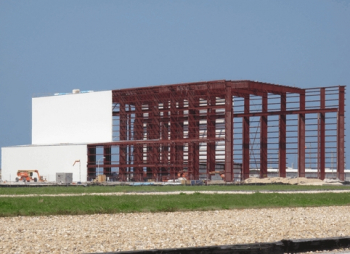 Following extensive work on its foundations, steel columns began to rise out of the ground just last month, ahead of its role in hosting SpaceX’s new rocket. Estimates show the structure is around 285 feet long and 120 feet wide.

The latest photos from 39A (L2) show the skeleton of the structure has been completed, with the skin of the building now being installed around the outer walls.

Work on the pad expected to be complete by the end of the summer while SpaceX is aiming to send the debut rocket’s stages to the coast in the second half of this year. 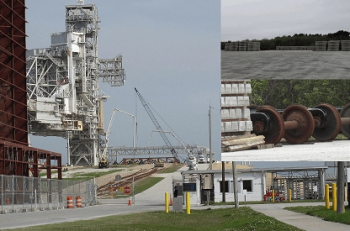 The newly arrived Falcon Heavy will then be put through a Wet Dress Rehearsal (WDR), departing the HIF on the Transporter Erector, up the famous 39A incline on rails – most of which have already arrived been laid out on the ramp, with a collection of concrete sleepers also staged in the complex.

Once the rocket has made the short trip up to the top of the incline, it will be erected on the launch mount that has been constructed over the flame trench.

Recent work has involved the pouring of a large amount of concrete around this area of the pad.

While SpaceX remains hopeful they will be able to launch the debut Falcon Heavy in 2015, the company has stated it has a large amount of schedule margin for completing the pad work and validating its systems ahead of the opening launch for its first paying customers.

That mission will be its second flight, with the Space Test Program-2 – as its primary payload – due to launch in April, 2016.