KSC shopping for Liquid Hydrogen solution ahead of SLS debut

NASA has begun to plan its Liquid Hydrogen options relating to debut launch of the Space Launch System (SLS). Options under consideration include the staging of up to 30 trailers full of LH2, ready to replenish the storage tank at Pad 39B. The main consideration relates to a scrub late in the countdown – which would result in a shortfall of 330,000 gallons based on the current storage infrastructure.

The lifeblood of the Space Launch System (SLS) will be Liquid Oxygen (LOX) and Liquid Hydrogen (LH2) – combined at a ratio of about 6:1 to feed the four RS-25 main engines.

For it to remain in a full liquid state, it needs to be cryogenically cooled.

As seen during the loading of the commodities into a rocket ahead of launch, some of the LH2 boils off, as the super cooled liquid absorbs heat from the environment and evaporates or “boils off”. Insulation is used mitigate this problem, but it is ultimately unavoidable. 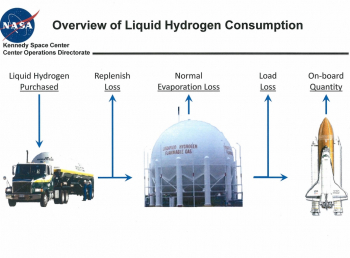 As seen during the Shuttle era, the loss of LH2 was carefully calculated and occurred at different stages ahead of launch.

The first large loss of LH2 is known as “Replenish Loss” – which based on quantity of liquid hydrogen transferred to the Ground Storage Tank from the LH2 tankers that deliver the commodity to the launch site.

Replenish Loss occurs due to the chill-down of the transfer system and tanker pressurization. This resulted in a loss of approximately 13 percent of the total LH2 during Shuttle operations.

The second stage of LH2 loss is called “Normal Evaporation Loss” – which occurs due to the heat transferred from the ambient environment to the Ground Storage Tank, which results in evaporation. This resulted in the loss of approximately 12 percent of the total liquid hydrogen purchased over the entire Space Shuttle Program. 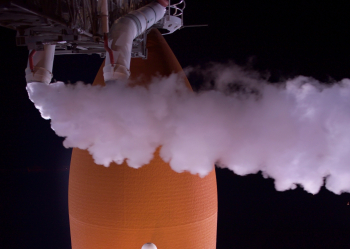 The final consideration during the Shuttle Program was “Load Loss” – which occurred due to the chill-down of the ground system, the chill-down of flight system – and the evaporation through External Tank during stable replenishment – a process used to keep the tank topped up during the boil off of the commodities.

The total amount of Load Loss was dependent upon number of scenarios, such as launch, scrub, tanking test, Flight Readiness Firings and so on.

However Load Loss resulted in the loss of approximately 21 percent of the total liquid hydrogen purchased over the entire Program.

The problem of LH2 losses ahead of launch were considered to be acceptable due to the love of LH2, which – when mixed with its LOX oxidizer – provides excellent performance.

This LH2 and LOX partnership will be in action again for the SLS rocket, resulting in NASA making new considerations on the commodity supplies ahead of the opening launch in 2018. 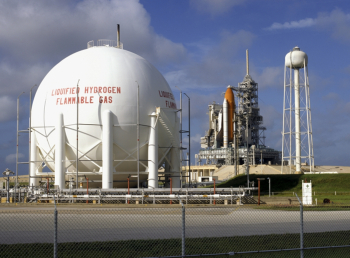 The main consideration is the use of the existing storage facility for the LH2 at Pad 39B.

While the pad is undergoing large scale changes ahead of hosting the Heavy Lift Launch Vehicle (HLV), the LH2 storage facility is a remnant of the Shuttle era, until it is replaced ahead of the second SLS launch in 2020/1.

“The support is specifically for the resupply/replenishment of LH2 following a scrubbed launch scenario. It is only in support of the first launch of SLS, but may require multiple series of launch attempts, with approximately 3-4 weeks between each series of attempts.

Subsequent SLS launches will be able to utilize the storage volume of a new 1.4M gallon storage tank.”

With the LH2 storage capacity at the pad limited to the heritage capacity, should SLS’ first launch suffer from an aborted late in the countdown process – with the on-board LH2 is drained back to the LH2 storage tank – the tank will be 330,000 gallons short of being able to support another launch attempt within the required 24 to 48 turnaround window.

The KSC team has evaluated two options to mitigate such a situation. 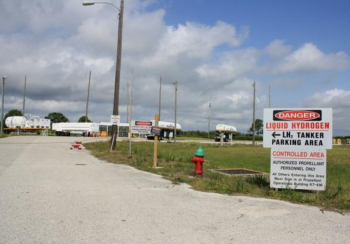 The first involves a convoy of 28 to 30 trailers staged to support the immediate replenishment of the storage tank. During the Shuttle era, these trailers arrived in convoys of road tankers from Louisiana.

The second involves 10 to 12 trailers, offloading their contents at Pad 39B, before being routed approximately five miles to Cape Canaveral Air Force Station Launch Complex 37B to be filled from that pad’s LH2 storage tank, before being routed back to LC-39B for offload.

This transfer would be repeated until the LC-39B storage tank has been replenished.

Interested contracts are expected to respond to the RFI by March 17, providing an outline of their availability for one of both of the proposed options.

Interestingly, as SLS evolves into the Block 2 variant, yet more LH2 storage will be required.

“The largest LH2 demand will be the SLS Block 2 configuration estimated to require up to 3 million gallons of LH2 storage tank capacity,” added additional documentation. “It is expected that the SLS Block 2 and the storage and transfer system will have similar percentage losses as the Space Shuttle.”

(Images: Via NASA and L2 content from L2’s SLS specific L2 section, which includes, presentations, videos, graphics and internal – interactive with actual SLS engineers – updates on the SLS and HLV, available on no other site.)