The engineering marvel that is the International Space Station has provided a continuous human presence in space for nearly 15 years.

Ably supplied by a fleet of international Visiting Vehicles, the Station is providing unique micro G science and human space flight experience – lessons that are becoming a foundation for humanity’s eventual leap into long duration missions to Mars. 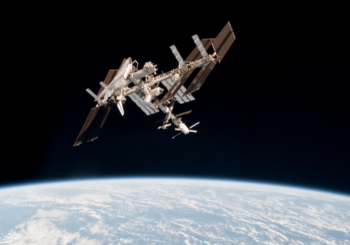 The Station’s flagship Visiting Vehicle was the Space Shuttle, with Discovery, Atlantis and Endeavour providing the upmass requirements to loft the key elements of the ISS into orbit for assembly.

The fleet also ensured the Station’s supplies were topped up during this key phase of the Station’s development, along with the providing transportation of the crews that would take up residency on the orbital outpost – in tandem with the primary role of the Russian Soyuz.

Although it is still argued the Shuttle’s retirement was premature – as was seen via several high level attempts to extend Shuttle operations past STS-135 – the fleet concluded its final role of completing the assembly phase for the Station, allowing it to enter its utilization role as a national laboratory. 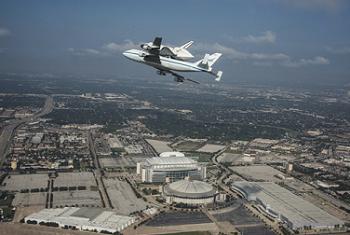 Ultimately, retirement of the Shuttle fleet was honorable, with the final missions proving to be a huge success from a mission and safety standpoint, prior to their high profile departures to their retirement homes. However, their farewells also marked a massive reduction in NASA’s capability to support the ISS.

There was always going to be a “gap” in capability, partly due to NASA’s budget restrictions and a botched Constellation Program (CxP) approach that ultimately led to its cancellation.

While the remnants of that program has since been repurposed into an exploration plan, the support of the ISS soon became the near-term focus for the Agency.

Although the problem of ensuring a continued ISS presence for Americans – on a Space Station they have mainly paid for – was “solved” via the purchasing of seats on the Russian Soyuz, the retirement of Shuttle also resulted in a major reduction in the supply chain.

NASA managers had already mitigated some of the future demands by utilizing the final Shuttle missions to stage numerous supplies and spares on the ISS, such as the Orbital Replacement Units (ORUs) – some of which have already been put to work during recent spacewalks.

However, a new fleet of vehicles was required to take it in turns to launch to the ISS with supplies, ranging from food and clothes to key components demand by the Station at any given time.

The fleet was international in nature, with the Russians continuing their established supply route via the Progress, in additional to the Automated Transfer Vehicle (ATV) from ESA along with Japan’s HTV. But that wasn’t enough, not least for the USOC (American side) of the ISS.

Out of this problem came one of NASA’s finer ideas, the utilization of American industry, ultimately part of a bigger plan to turn over Low Earth Orbit (LEO) to the commercial sector, which will eventually free the Agency to concentrate on deep space exploration.

Although the early process wasn’t without its difficulties – such as RpK’s protest – two winners earned the right to launch vehicles packed with supplies to the Station.

SpaceX – launching the Dragon spacecraft via its own Falcon 9 rocket – were joined by Orbital (now Orbital ATK) – lofting its Cygnus spacecraft atop of the Antares rocket.

Both spacecraft graduated via the NASA Commercial Orbital Transportation Services (COTS) contract, proving their could safely conduct missions to the Station, prior to winning a long term Commercial Resupply Services (CRS) deal with NASA.

The initial phase of the CRS missions has been a roaring success for SpaceX, with the CRS-5/SpX-5 mission recently completed, while the CRS-6/SpX-6 Dragon is already preparing for her mission in April.

Orbital ATK, however, suffered a major failure seconds into the launch of its CRS-3/ORB-3 Cygnus, when the Antares rocket failed shortly after launch last year.

Thanks to some advanced planning, NASA juggled some immediate upmass requirements to the Dragon, while Cygnus looks forward to at least one ride on the ULA Atlas V – prior to returning to an upgraded version of the Antares.

Per the CRS contract obligations, SpaceX has 12 missions to complete, with SpX-12 listed on manifest documentation (L2) as taking place in August, 2016.

Orbital’s CRS obligations cite eight missions, although this has undergone evaluations since the ORB-3 failure, not least with the prospect of additional cargo going uphill on a larger capacity version of the spacecraft. ORB-7 is currently shown as taking place in October, 2016.

With the lifetime of the ISS extended deep into the 2020s, a large number of additional resupply missions are required, which is encompassed in NASA’s recently announced CRS2 contract drive. A number of vehicles are currently promoting their ability to win that future contract. 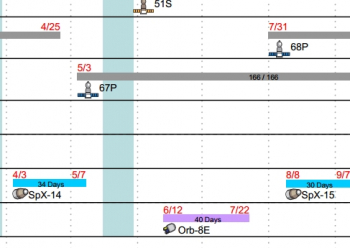 However, the latest FPIP manifest (L2) – shows what is likely to be an extension of the current CRS contract, to the tune of four missions with the current CRS players – fulfilling requirements for 2017.

The newly installed missions – albeit on a planning document, which does not confirm they have been officially contracted – show three new missions for the Dragon, with SpX-13, SpX-14 and SpX-15 enjoying missions to the ISS in February, April and August of 2017.

Meanwhile, ORB-8E – likely an extended variant – is listed as launching in June, 2017. NASA has said it was planning to extend the current contracts, but the Agency did not state as to how many missions this would involve.

The FPIP points to that number of additional missions to be four, three of which will be awarded to SpaceX.

The FPIP team have also added four Commercial Crew flights into manifest planning, with two demo missions for both Dragon 2 (V2) and Boeing’s CST-100, ahead of the first US Crew Vehicle mission (USCV-1). An article relating to those additions will be published this week.

(Images: via L2’s Special Sections. Other images via NASA)