NASA astronauts Terry Virts and Barry “Butch” Wilmore stepped outside the ISS on Sunday on what was the final in a series of three spacewalks to prepare the station for the arrival of future cargo and crew vehicles. EVA-31, which began at 11:52 PM GMT, focused on installing a new communications system for the future vehicles – concluding a hugely successful trio of EVAs.

The ISS currently has a number of systems used to communicate with VVs. In the past, during the Space Shuttle era, ISS and Shuttle crew members used the station’s Ultra High Frequency (UHF) two-way radio system to talk to each other during the rendezvous and departure phase, however the Shuttle and ISS did not exchange telemetry with each other.

Current cargo VVs do not need voice communication capability, however they use two different systems to provide command and telemetry links. The Japanese HTV and Orbital ATK’s Cygnus vehicle use the Japanese PROX system, which utilises its own antennas on the exterior of the Japanese Experiment Module (JEM).

SpaceX’s Dragon spacecraft uses the Commercial UHF Communications Unit (CUCU) system for commanding and telemetry, which utilises the station’s external UHF antennas. All these systems however have varying capabilities and limitations, and do not provide a standardised specification for future vehicles to comply with. 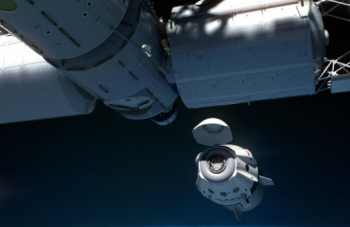 The C2V2 system will require new antennas to be installed outside the ISS, which was the focus of Sunday’s EVA.

Sunday’s spacewalk, designated US EVA-31, was scheduled to last 6 hours 45 minutes. However, thanks to another smooth EVA, it concluded after just 5 hours and 38 minutes – leading to some friendly ribbing from veteran spacewalker Suni Williams – who was providing the role of CAPCOM for the spacewalk.

While not particularly challenging in terms of tasks, it was a “fiddly” set of tasks, due to the extensive amount of cabling that needed to be completed, with the bulk of each crewmembers’ timeline devoted to cabling work.

At the completion of the previous EVA (US EVA-30), there was a brief concern about water in astronaut Terry Virts’ helmet, however that issue is no longer a concern, as explained in L2 ISS notes:

“After ingress from EVA-30, the crew reported water in the EMU 3005 helmet. The crew estimated the quantity to be ~15 ml, plus a small amount in the Communications Carrier Assembly (CCA) cap and Helmet Absorption Pad (HAP).” 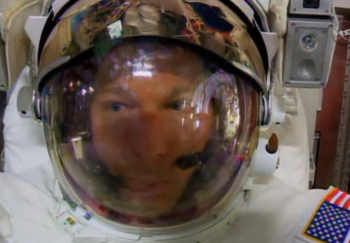 This turned out to be a recurrence of a known issue with EMU 3005, known as “sublimator water carryover”, where, as explained by NASA, “a small amount of residual water in the sublimator cooling component can condense once the environment around the suit is repressurised, resulting in a tiny amount of water pushing into the helmet”.

For Sunday’s EVA, Terry Virts was EV-1 and wore the EMU with the red stripes, while Barry Wilmore was EV-2 and wore the all-white EMU.

Following egress from the Quest airlock, the first order of business for Virts was to translate out to the Port 3 (P3) Truss, while Wilmore translated out to the Starboard 3 (S3) Truss. 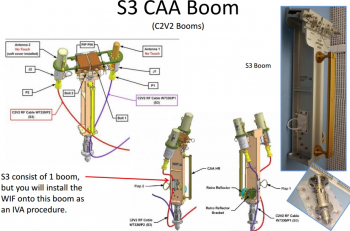 Virts installed a boom onto a Worksite Interface (WIF) on the aft-zenith side of the P3 Truss, and then proceeded to install two C2V2 antennas onto the boom using Push In Pull (PIP) pins.

Meanwhile, Wilmore installed a similar boom onto a WIF on the forward-zenith side of the S3 Truss, and also installed two antennas onto that boom, again using PIP pins.

Both astronauts then headed back to the airlock to retrieve four cable reels, and then moved to the US Destiny laboratory.

Once at the lab, the two spacewalkers removed a debris shield from the Starboard side of the aft endcone of the Lab, whereupon they demated a single GPS/Ku-band antenna connector (labelled J7). 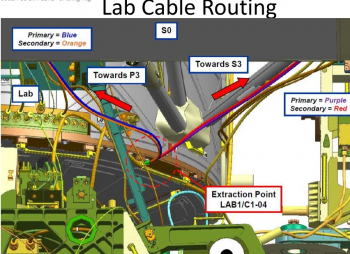 Both Virts and Wilmore then took a cable reel each, and both translated out to the P3 Truss, with the cable deploying from the reels as they moved.

Virts took the aft route, followed by Wilmore who took the forward route. Both wire-tied their cables in place as they went – a fiddly task when wearing pressurised gloves.

When the pair arrived at the earlier installed boom on the P3 Truss, both cables were mated to the two earlier installed C2V2 antennas on the boom. In addition, two retro reflectors were then installed on the boom, which will be used by future VVs for range finding. The pair then completed cleanup of the worksite and headed back to the Lab. 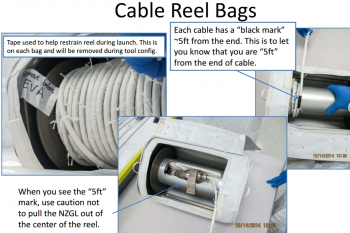 Once at the Lab, the pair retrieved the final two cable reels, and repeated the above procedure for the S3 Truss, with Virts taking the forward route, and Wilmore taking the aft route, each wire-tying their cables in place along the way.

Once at the previously installed boom on the S3 Truss, the pair mated their cables to the two C2V2 antennas on the boom, whereupon Wilmore installed a single retro reflector onto the boom. Meanwhile, Virts translated back to the Lab and began to cleanup the worksite there.

Once complete with the retro reflector task, Wilmore cleaned up the S3 worksite and headed back to the airlock, where both he and Virts ingressed to end the EVA – well ahead of schedule.