United Launch Alliance (ULA) successfully launched the ninth Block IIF Global Positioning System navigation satellite Wednesday in an afternoon lift-off from Cape Canaveral. Liftoff, atop a Delta IV rocket, was on schedule at 14:36 EDT (18:36 UTC), at the opening of what was an 18-minute window at  Space Launch Complex 37B.

The GPS IIF-9 satellite is the ninth of twelve Block IIF satellites intended to replenish and modernise the US Air Force’s Global Positioning System.

A fleet of spacecraft in Medium Earth Orbit dedicated to providing precise navigation data for military and civilian users, the GPS system was developed in the 1970s and 1980s, with deployment of the first operational satellite occurring on 14 February 1989 following a series of eleven test spacecraft.

Those test spacecraft, which were significantly smaller and lighter than their operational successors, have become known as GPS Block I and were carried into orbit by Atlas E/F rockets with SGS upper stages.

Operational flights from 1989 to 2009 made use of the Delta II rocket, with deployed nine Block II and nineteen Block IIA satellites to take the constellation to operational capacity in the mid-1990s. Twenty one Block IIR and IIRM replenishment satellites were launched between 1997 and 2009 to maintain the operational status of the network.

The Block IIF series, which began launching in 2010, are an interim batch of 12 spacecraft designed to replenish the constellation and provide new capabilities, such as the L5 navigation frequency, ahead of the introduction of third-generation Block IIIA satellites – now planned for early 2017.

Block IIF satellites are manufactured by Boeing, in contrast to earlier satellites that were built by Lockheed Martin or Rockwell. 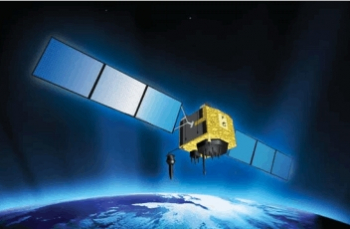 With a mass of 1,630 kilograms (3,590 lb), the new spacecraft are slightly lighter than their predecessors, however this is accounted for by their omission of an apogee motor – instead relying on the more powerful Atlas V and Delta IV rockets to deliver them directly into their operational orbits. Each Block IIF satellite is designed to operate for 12 years.

Each satellite in the IIF series has been named after a star. Previous missions have been named Polaris, Sirius, Arcturus, Vega, Canopus, Rigel, Capella and Spica; the GPS IIF-9 mission is Deneb after the brightest star in the constellation Cygnus.

Wednesday’s mission made use of a Delta IV rocket, flying in the Medium+(4,2) configuration. Consisting of a single Common Booster Core (CBC) first stage, a four-metre Delta Cryogenic Second Stage (DCSS) and a pair of GEM-60 solid rocket motors to augment the CBC’s thrust at liftoff, the Medium+(4,2) is the most-flown version of the rocket with liftoff marking its thirteenth flight. Across all configurations it was the twenty-ninth Delta IV to fly.

The rocket was number D371, indicating it as the 371st Delta series rocket to fly. This number is somewhat spurious, however, as the count includes rockets with little relation to the original Thor-Delta series, such as the Delta IV, while excluding closer relatives that were not named Delta, such as the N-I and N-II vehicles produced under licence in Japan.

First launched in 2002, the Delta IV was developed by Boeing, alongside Lockheed Martin’s Atlas V, to compete for contracts under the US Air Force’s Evolved Expendable Launch Vehicle (EELV) program. Both rockets, along with Boeing’s older Delta II, were transferred to United Launch Alliance (ULA) upon its formation in 2006.

ULA has recently announced plans to retire the Delta IV in favour of the cheaper Atlas and its proposed next-generation vehicle intended eventually to replace both rockets.

ULA currently envisages the Medium and Medium+ configurations being phased out in the next four years, with Delta IV Heavy launches continuing until a new vehicle is certified to carry equivalent payloads.

Despite its plans to retire the Delta, ULA announced last week that it had been awarded a contract for deployment of NASA’s Solar Probe Plus (SPP) mission using a Delta IV in July 2018. Due to SPP’s required target orbit, the Delta IV Heavy is the only qualified rocket in the US fleet capable of launching it, and only with the aid of a Star 48B upper stage.

Constructed for unmanned tests of the Saturn I rocket during the Apollo program, Launch Complex 37 supported several Saturn I and IB flights in the mid-1960s, ending with the Apollo 5 flight that tested the Lunar Module in Earth orbit.

The old pad was demolished in the 1970s, with Boeing constructing a new facility close to the site when it began the Delta IV program in the late 1990s.

Wednesday’s launch began with ignition of the Delta IV’s RS-68 main engine. At the zero mark in the countdown the two GEM-60 solid rocket motors ignited and the vehicle will begin its ascent towards orbit.

Executing a series of pitch and yaw manoeuvres beginning eight seconds into the flight, Delta 371 flew out over the Atlantic on an azimuth of 46.16 degrees. The rocket reached Mach 1, the speed of sound, 48.4 seconds after liftoff, passing through the area of maximum dynamic pressure (max-Q) thirteen seconds later. 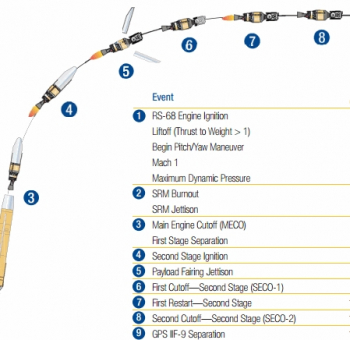 Burnout of the solid rocket motors occurred one minute and thirty five seconds after liftoff, the spent motors remaining attached for 5.1 seconds before separating. Four minutes and 28.1 seconds after launch Main Engine Cutoff, or MECO, occurred with the RS-68 shutting down to conclude its burn.

Seven seconds after MECO the spent first stage was jettisoned, with second stage ignition taking place fourteen and a half seconds after staging, once the upper stage engine nozzle had been extended.

The Delta Cryogenic Second Stage (DCSS) is powered by a single RL10B-2 engine which, like the first stage, burns liquid hydrogen and liquid oxygen.

Wednesday’s mission calls for it to make two burns, the first to establish a transfer orbit and the second at apogee to circularise the payload’s deployment orbit. Unlike earlier-generation spacecraft, Block IIF GPS satellites are deployed directly into their operational orbits. 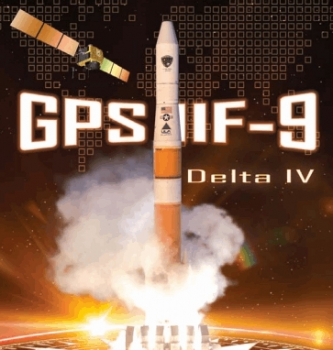 The second stage’s first burn lasted eleven minutes and 1.3 seconds, with separation of the rocket’s payload fairing occurring ten and a half seconds after ignition. At the burn’s conclusion, the flight entered a coast phase, with the upper stage and spacecraft drifting towards apogee for the next two hours, 46 minutes and 29.2 seconds.

A one minute, 46.1-second burn at the end of the coast phase raised the orbit’s perigee. At spacecraft separation, which will took place ten minutes and 41.4 seconds after the end of the second burn, the vehicle was in a circular orbit at an altitude of 20,459 kilometres (12,712 miles, 11,047 nautical miles) and an inclination of 55 degrees.

The first Delta IV launch of the year, Wednesday’s mission was the seventh US launch of 2015 and the fourth for ULA – who have already flown three missions since January with their Atlas V and Delta II vehicles.

The next mission for United Launch Alliance will occur in May, with an Atlas deploying the AFSPC-5 mission while the Delta IV’s next flight is slated for July with a Wideband Global Satcom spacecraft. A further Delta launch is expected in September with the NROL-45 mission – expected to be a Topaz radar imaging satellite – from Vandenberg.

Following the launch of the GPS IIF-9 satellite, three Block IIF spacecraft will remain to fly. These are scheduled for Atlas V launches in June, September and next January. The next GPS launch atop a Delta rocket is scheduled for early 2017 when the vehicle will boost the first GPS IIIA spacecraft into orbit.