NASA’s MESSENGER (MErcury Surface, Space ENvironment, GEochemistry, and Ranging) spacecraft has ended its mission in a dramatic, but planned, event – crashing into the surface of the planet that it had been studying for over four years. “Going out with a bang” the spacecraft impacted with Mercury at nearly 9,000 mph, creating a new crater in the process to leave mark at the end of its lifetime.

This EOM (End Of Mission) event marked the conclusion to its second and final mission extension for its orbital operations at Mercury.

Among its many accomplishments, the MESSENGER mission determined Mercury’s surface composition, revealed its geological history, discovered its internal magnetic field is offset from the planet’s center, and verified its polar deposits are dominantly water ice. 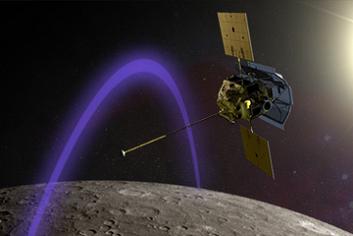 Moving into second mission extension, MESSENGER’s scientists followed-up on and made new discoveries about Mercury and our solar system’s inner-most area.

The spacecraft achieved numerous scientific goals, such as gathering information regarding solar wind flows and swirls.

The solar wind of particles streaming off the sun helps drive flows and swirls in space that are actually just as complicated as terrestrial weather patterns observed on Earth, Venus, Mars, Jupiter, Saturn, Uranus, and Neptune. 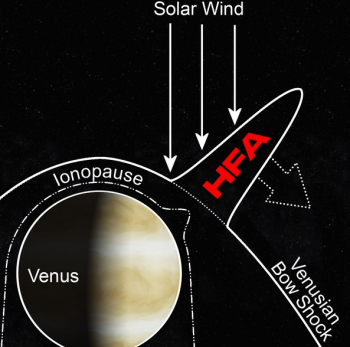 Using data collected from MESSENGER, scientists were able to identified for the first time at Mercury a classic space weather event called a Hot Flow Anomaly (HFA), which had previously been spotted at Earth, Venus, Saturn, and Mars.

In order to find these HFAs at Mercury, the analysis team used MESSENGER to detect the presence of two HFA signatures.

The first signature led to the detection of magnetic fields that can be used to detect giant electric current sheets that lead to HFAs.

The second observation looked for the heating signature of the charged particles.

Scientists were then able analyze this information to quantify the kind of turbulence that existed in the region. This led to the discovery of HFAs at Mercury.

These observations not only helped prove the existence of HFAs at Mercury, but also helped create a more complete understanding of this type of space weather in general.

The new study of information gathered by MESSENGER suggests that the most important factor for determining HFA size is the geometry and size of the planet’s bow shock.

MESSENGER also directly observed solar neutrons, which are created during solar flare events and carry vital information regarding the power of solar flares – the intense bursts of radiation from the Sun during times of magnetic energy release – and the processes of solar flares that accelerate solar particles.

However, this was just part of the spacecraft’s overall achievements.

By the time the mission celebrated its 10-year anniversary on 3 August 2014, MESSENGER had travelled a total of 29 trips around the sun, returned 255,858 images to Earth, conducted 6 flybys of three of the four inner planets (not Mars), and performed 3,308 orbits of Mercury spanning 7 Mercury solar days and 1,232 Earth days.

During those orbits of Mercury, MESSENGER conducted 35 million shots of the Mercury Laser Altimeter, returned 10 terabytes of scientific information to Earth that has so far been publically released, and has averaged a speed of 91,730 mph (relative to the Sun).

And as those final months of operations began, MESSENGER’s team continued to advance the mission beyond its original goals.

On 8 October 2014, MESSENGER’s team turned the spacecraft’s camera away from Mercury and toward Earth to observe the 8 October 2014 lunar eclipse.

At the time of the eclipse, MESSENGER was 107 million km (66 million miles) from Earth, and its viewing angle was nearly perfect as MESSENGER was almost but not quite directly between the Earth and the Sun.

Thus, from MESSENGER’s viewpoint, the Earth and moon were nearly full.

The observation was in part a test to see what could be observed as well as part of a growing effort by the scientific community to use still operational but past their original mission timeframes spacecraft to perform non-traditional observations of solar system bodies.

These observations are designed to help planetary scientists understand what various stellar events (that we concretely know about) look like from long distances and how our current technology observes them to help in the detection of such phenomenon in extra-solar planetary systems. 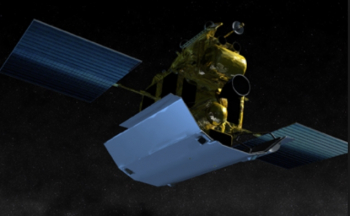 By this time the MESSENGER team were already planning the end of the spacecraft’s life. The probe has enough onboard fuel to perform just one more orbit-raising maneuver in early 2015. Once this burn was completed, MESSENGER was ostensibly out of fuel.

Because the probe was in an orbit with a low periapsis (point in an orbit of closest approach to the center of mass of a stellar body other than the Earth or Sun), regular orbit-raising maneuvers were needed to keep the spacecraft in a stable orbit.

With MESSENGER out of fuel, its orbit slowly decayed, and the spacecraft’s destiny at end its tenure at the innermost planet of our solar system was set.

During the final days, the team began a hover campaign that allowed the spacecraft to operate within a narrow band of altitudes from five to 35 kilometers from the planet’s surface.

On Tuesday, the team successfully executed the last of seven daring orbit correction maneuvers that kept MESSENGER aloft long enough for the spacecraft’s instruments to collect critical information on Mercury’s crustal magnetic anomalies and ice-filled polar craters, among other features. 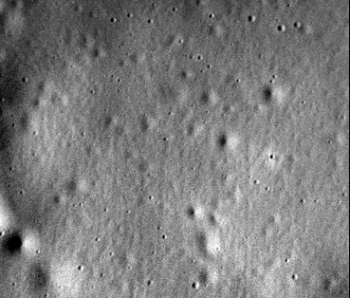 After running out of fuel, and with no way to increase its altitude, MESSENGER was finally unable to resist the sun’s gravitational pull on its orbit.

MESSENGER’s last day of real-time flight operations began with initiation of the final delivery of data and images from Mercury via a 230-foot (70-meter) DSN antenna located in Madrid, Spain.

After a planned transition to a 111-foot (34-meter) DSN antenna in California, mission operators later confirmed the switch to a beacon-only communication signal.

“We monitored MESSENGER’s beacon signal for about 20 additional minutes,” noted mission operations manager Andy Calloway. “It was strange to think during that time MESSENGER had already impacted, but we could not confirm it immediately due to the vast distance across space between Mercury and Earth.”

Prior to impact, MESSENGER’s mission design team predicted the spacecraft would pass a few miles over a lava-filled basin on the planet before striking the surface and creating a crater estimated to be as wide as 50 feet. 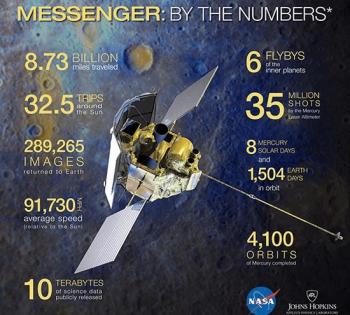 Mission control finally confirmed end of operations when no signal was detected by NASA’s Deep Space Network (DSN) station in Goldstone, California, at the time the spacecraft would have emerged from behind the planet.

MESSENGER hit the surface of the planet at 8,750 mph and created a new crater on the surface.

“Going out with a bang as it impacts the surface of Mercury, we are celebrating MESSENGER as more than a successful mission,” added John Grunsfeld, associate administrator for NASA’s Science Mission Directorate in Washington.

“The MESSENGER mission will continue to provide scientists with a bonanza of new results as we begin the next phase of this mission – analyzing the exciting data already in the archives, and unravelling the mysteries of Mercury.”