Two more satellites destined for a ride into space have completed assembly ahead of being lofted by Arianespace rockets. Europe’s Sentinel-2A was transported by truck from IABG’s facilities to Munich airport for a Antonov cargo plane ride on Monday night, while Orbital ATK’s SKYM-1 satellite recently arrived at the Kourou spaceport after being assembled four months ahead of schedule.

Sentinel-2A spacecraft is part of Europe’s Copernicus Program – formerly known as Global Monitoring for Environment and Security (GMES) – designed to give Europe complete independence in the acquisition and management of data for Earth environmental, civil safety and humanitarian purposes.

A Soyuz ST-A rocket lofted the Sentinel-1A mission last year, with the spacecraft marking its first full year in service this month. It has orbited Earth more than 5300 times. 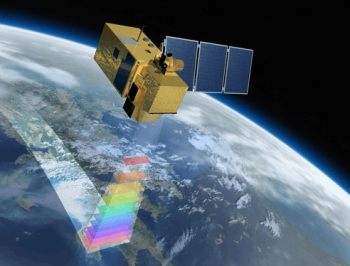 Sentinel-2A will be the next spacecraft to launch, this time on Arianespace’s Vega rocket. The launch is currently scheduled to take place on June 11.

Astrium won the contract to build the two Sentinel-2 spacecraft via awards from ESA in 2008 and 2010 respectively.

The mission will orbit at a mean altitude of approximately 800 km and, with the pair of satellites in operation, has a revisit time of five days at the equator – under cloud-free conditions – and two to three days at mid-latitudes.

This year marked the business end in the Sentinel-2A’s spacecraft’s path to launch, as it completed functional test campaign at Airbus Defence & Space (DE) and was shipped to IABG to undergo its environmental test campaign.

The processing flow will allow for the Sentinel-2B spacecraft to enter launch readiness in Spring 2016.

For this first launch, Sentinel-2A was packed into its special transport container and moved by truck from IABG’s facilities to Munich airport. Along with four other containers of equipment, it was loaded onto the Antonov cargo plane and took off on Monday evening.

The spacecraft arrived at Cayenne airport French Guiana in the early hours of Tuesday local time, before being loaded onto trucks for the road trip to the Centre Spatial Guyanais (CSG).

Once at the spaceport, it will join another recent arrival, the Sky Mexico-1 (SKYM-1) satellite. 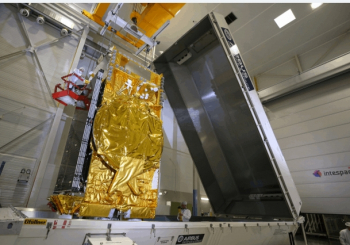 It will join DIRECTV-15 for a ride uphill on an Ariane 5 rocket next month, meaning both of the satellites involved in the VA223 launch will be operated by the same company.

Orbital ATK produced the satellite at its Dulles, Virginia manufacturing facility in just 20 months, four months ahead of the original baseline schedule.

“Our ability to deliver this satellite well ahead of schedule demonstrates the effective, experienced performance of our Orbital ATK team. We take great pride in the short cycle manufacturing process that results in high quality and reliable satellites for our customers,” noted Chris Richmond, Vice President and General Manager of Orbital ATK’s commercial satellite division. 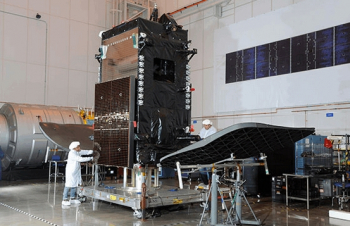 “SKYM-1 is our first satellite built for DIRECTV and represents what we hope will be the start of a longstanding, successful relationship.”

The SKYM-1 satellite is based on the flight-proven GEOStar-2TM platform and has a launch mass of 2475 kg. It is expected to have a service life of 15 years.

“Orbital ATK’s execution on this program has been phenomenal,” said Phil Goswitz, Senior Vice President of Space and Communications for DIRECTV.

“Its program team worked with DIRECTV to successfully manage several technical hurdles and delivered four months ahead of schedule. Orbital ATK exceeded its commitment to us, and that’s what everyone is looking for in this industry.”

The next Arianespace mission, Flight VA222, is set to launch on April 24, with an Ariane 5 tasked with lofting the THOR 7 and SICRAL 2 satellites. This launch was slightly delayed due to an anomaly with a fluid connector between the cryogenic upper stage and the launch table during rollout operations.