The next NASA lander to touch down on the surface of Mars is picking up the pace ahead of its launch on an Atlas V rocket next March. The latest milestones saw the lander deploy its solar arrays inside a Denver clean room at Lockheed Martin, marking the completion of the lander’s assembly as it heads into a rigorous environmental test program.

As the lander’s name suggests, the latest hardware to head to Mars will provide additional scientific insight into the planet during a mission that is set to last two years. 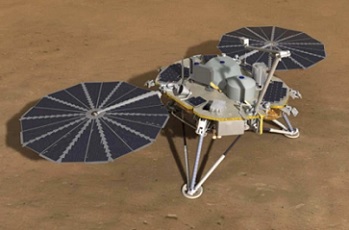 The InSight mission is led by JPL, with a science team that includes US and international co-investigators and science instruments from CNES and DLR.

Assigned as a Discovery-class mission, the InSight mission holds a large amount of synergy with NASA’s Phoenix lander, which successfully touched down near Mars’ northern polar ice cap in 2008.

Its mission is classed as a terrestrial planet explorer that will address one of the most fundamental issues of planetary and solar system science; understanding the processes that shaped the rocky planets of the inner solar system (including Earth) more than four billion years ago.

Development of the Mars-bound spacecraft is under the stewardship of Lockheed Martin.

Engineers entered what is known as the ATLO phase of processing last year and are on schedule to hitch a ride uphill on the United Launch Alliance (ULA) Atlas V rocket flying in her 401 configuration.

The first step on the assembly path involved propulsion proof and leak testing, leading to a trip to the clean room.

Technicians installed subsystems such as avionics, power, telecom, mechanisms, thermal systems, and guidance, navigation and control. Science instruments have also been delivered by the mission partners to Lockheed Martin for integration with the spacecraft.

In addition to the lander, the spacecraft’s protective aeroshell capsule and cruise stage – which provides communications, power and propellant during the journey to Mars – underwent assembly and testing alongside the lander.

Now fully assembled, the spacecraft will undergo rigorous environmental testing throughout the summer months. This testing will confirm InSight can survive deep space travel and the harsh conditions of the Martian surface.

During the environmental testing phase, the lander will be exposed to extreme temperatures, vacuum conditions of nearly zero air pressure simulating interplanetary space, and a battery of other tests over the next seven months. 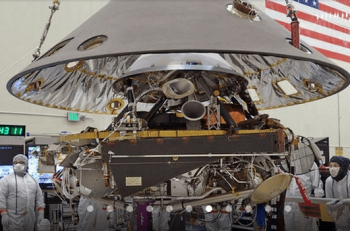 The first thermal vacuum test will involve the spacecraft’s cruise configuration, which will be used during its seven-month journey to Mars.

In the cruise configuration, the lander is stowed inside an aeroshell capsule and the spacecraft’s cruise stage – for power, communications, course corrections and other functions on the way to Mars – is fastened to the capsule.

“The assembly of InSight went very well and now it’s time to see how it performs,” noted Stu Spath, InSight program manager at Lockheed Martin Space Systems, Denver. “The environmental testing regimen is designed to wring out any issues with the spacecraft so we can resolve them while it’s here on Earth.

“This phase takes nearly as long as assembly, but we want to make sure we deliver a vehicle to NASA that will perform as expected in extreme environments.” 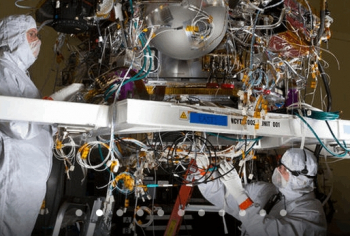 Additional testing will include simulating launch vibrations and checking for electronic interference between different parts of the spacecraft, prior to a second thermal vacuum test in which the spacecraft is exposed to the temperatures and atmospheric pressures it will experience as it operates on the Martian surface.

The launch is set to take place out of Vandenberg Air Force Base in California in March of 2016, the start of a six-month transit to the Red Planet.

“It’s great to see the spacecraft put together in its launch configuration,” said InSight Project Manager Tom Hoffman at JPL.

“Many teams from across the globe have worked long hours to get their elements of the system delivered for these tests. There still remains much work to do before we are ready for launch, but it is fantastic to get to this critical milestone.”

(Images: via NASA and Lockheed Martin)