Physical changes to a number of historic pads located on Florida’s Space Coast are progressing apace, with Cape Canaveral’s SLC-41 now enjoying modification work to prepare it for crewed launches of Boeing’s CST-100. The work is being conducted at the same time as two nearby pads – LC39A and 39B – continue their conversations to host SpaceX’s Falcon Heavy and NASA’s Space Launch System (SLS).

Florida’s world famous Space Coast has been the site of rocket launches ever since the Bumper 8 V-2 rocket lifted off from Launch Complex 3 in 1950. 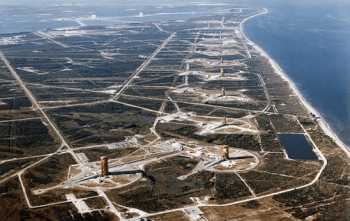 Cape Canaveral became a sprawling line of launch facilities, with pads stretching up from Port Canaveral.

The pad has a deep history, hosting the Titan IIIE in 1970, which deployed the Viking missions to Mars, the Voyager probes to the Outer Planets and the Helios spacecraft which studied the Sun.

After the Titan IIIE was retired in 1977, the complex fell out of use and would not see another launch for twelve years.

Launches resumed with the Titan IV in 1989. However, the final Titan launch from the pad was a failed attempt to place a Defense Support Program satellite into geosynchronous orbit in 1999.

Demolished and rebuilt for the Atlas V, the next launch from SLC-41 was the Atlas’ maiden flight in 2002, which carried Eutelsat’s Hot Bird 6 (now Eutelsat 8 West C) communications satellite.

At the time of launch, work had already begun near the pad for a return of Atlas’ crew launch capability.

It was an Atlas booster that launched John Glenn into space inside Friendship 7 in 1962, sending the first American into orbit around the planet.

Construction of the first two tiers of the new crew access tower for SLC-41 is laying the foundations for a tower to enable future astronauts and ground support teams can access Boeing’s CST-100 spacecraft for missions to the International Space Station (ISS).

The United Launch Alliance (ULA) selected Hensel Phelps Construction Co. of Orlando to provide program management contractor support for the management of the design, requirements development, cost and schedule projections, and risk mitigation for modifications to the launch facilities for commercial crew operations. 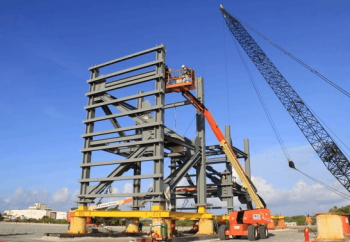 The construction of the tiers was completed off site prior to arriving by truck at SLC-41, allowing the pad to continue its Atlas V launch campaign without any schedule interruptions.

It will take five tiers to complete the 200-foot-tall structure before they are outfitted with electrical systems and elevators. 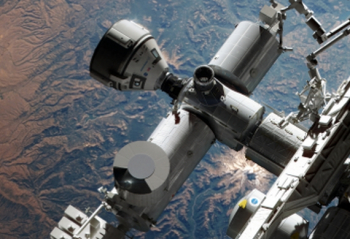 The first CST-100 launch on an Atlas V will be an uncrewed test flight to the Station via the “Boe-OFT” mission in April, 2017 – on a 30 days mission, ending with a parachute assisted return.

Should all go to plan, the second mission will involve a crew – yet to be selected – on a mission designated “Boe-CFT”, launching in July, 2017 – on a 14 day mission to the ISS.

CST-100’s will meet up with the Atlas V booster after being processed at the Kennedy Space Center (KSC).

The spacecraft’s Florida home will be the former Orbiter Processing Facility (OPF High Bay 3) – with a change to its call sign to the Commercial Crew and Cargo Processing Facility (C3PF) – which is deep into its transition, following the October, 2011 deal for a 15 year lease, agreed between NASA and Space Florida – the State’s aerospace economic development agency.

KSC’s two historic pads are also deep into their own transition, with 39A preparing to host SpaceX’s Falcon Heavy rocket. 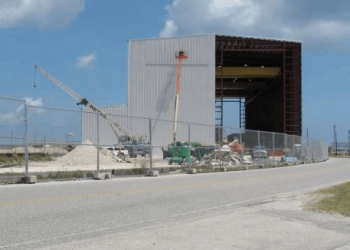 SpaceX’s new Horizontal Integration Facility (HIF) building is closing in on the final stages of its construction. (Image left taken Friday, via L2’s 39A coverage)

This has been a speedy turnaround of the former Shuttle launch complex since SpaceX took control of the pad on a 20 year lease. Work on the site only began late last year with the pile driving of the building’s foundations.

The building now has most of its outer skin, while the bridge cranes have been installed inside the building.

The debut Falcon Heavy will undergo a Wet Dress Rehearsal (WDR) on the pad later this year, departing the HIF on the Transporter Erector – or TEL (Transport/Erector/Launch) that is currently being worked on inside the building. 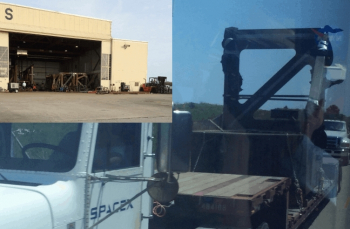 Sections of this hardware were seen arriving at 39A on Friday (L2), with the welded subsections taking the short trip from the S Hangar at KSC, where they have been worked on for the past several months.

Per a sighting on Friday (L2), the subsections are being transported on a SpaceX truck on the road alongside the crawlerway.

Once integrated with the Transporter Erector, the Falcon Heavy vehicle will be rolled up the incline at 39A on rails and erected on the launch mount that now appears to be nearing completion over the flame trench. The incline ramp has also received a large amount of work. 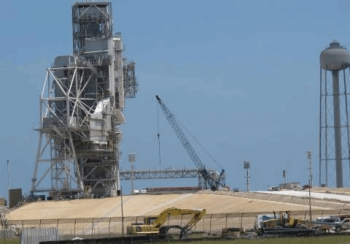 While SpaceX has claimed it will be able to launch the debut Falcon Heavy on a demo mission in 2015, early 2016 appears to be more realistic.

The first operational mission is with the Space Test Program-2 – as its primary payload – which still has a KSC schedule placeholder of NET (No Earlier Than) date of April, 2016.

However, that date – likely to be later in 2016 – won’t be confirmed until after the demo flight has been conducted.

At next door’s 39B, most of the visual changes are now complete, following the removal of its Shuttle infrastructure during its conversion into a “clean pad”. 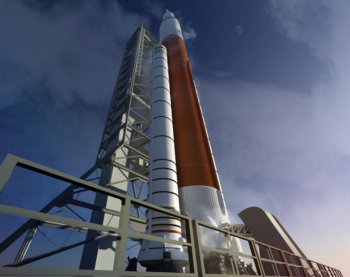 This pad will host the Space Launch System, with the opening flight set to take place in 2018.

The latest work involved preparations for the installation of a new Flame Deflector and associated Flame Trench work.

It was also recently announced the pad is already being prepared for the larger versions of the SLS.

Those considerations include work to provide the pad’s Catacomb Roof with reinforcements, allowing it to cope with increased power of the SLS Block 1B rocket that is set to become NASA’s heavy lift workhorse throughout the 2020s.

While the nature of 39B’s “clean pad” will allow for launches of other launch vehicles – along with the potential for small launchers to set sail from inside the complex – only SLS has been confirmed as a future tenant of the former Saturn V and Space Shuttle pad.