As the Russians continue their evaluations into the failure of the Progress M27-M mission, the resupply vehicle has been spotted passing the International Space Station (ISS). The vehicle – still spinning out of control – is in an orbit that is no threat to the orbital outpost, with the main evaluations now focusing on where the spacecraft will deorbit in the coming days.

All had appeared normal as the Soyuz 2-1A rocket lofted the latest Progress uphill for what was supposed to be a six hour fast-rendezvous with the International Space Station (ISS).

This was the 150th time a Progress vehicle had been launched. 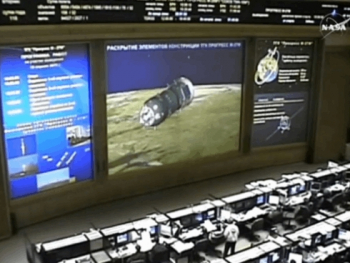 Live coverage of the ascent pointed to a nominal ride to orbit, including what appeared to be an uneventful separation between the third stage of the Soyuz 2-1A and the Progress. This was soon followed by the deployment of the vehicle’s two power generating solar arrays.

The next milestone involved the confirmation of antenna deployments, including those for the Kurs navigation system. At that point, problems were observed.

“Progress successfully launched at 118/07:10 GMT. As reported by Visiting Vehicle Officer (VVO), the solar arrays deployed, but there seems to have been a problem with the Kurs antenna deploy,” added notes from the Johnson Space Center (via L2’s Progress M-27M Coverage). 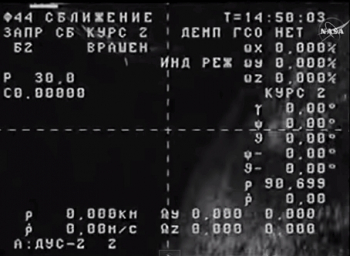 “After three orbits with little/no communication, Moscow established comms on fourth orbit and determined from camera views that the vehicle was tumbling.”

With the Progress in a spin, controllers in Moscow cancelled the six hour rendezvous with the Station and reverted to the traditional two day journey. This was aimed at allowing controllers more time to troubleshoot Progress’ issues and attempt to regain control.

At the time, Progress was drifting below and in front of the ISS in its insertion orbit phase. At no time was the Progress a conjunction threat for the Station. 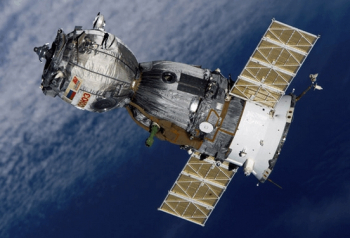 The immediate plan was centered around MCC-Moscow controllers making attempts to bring the Progress vehicle back under control using the Maneuver Control Systems (MCS) system.

The back up plan was to involve the activation of the TORU system – used to manually control the Progress when Kurs is unavailable – and attempt to null the vehicle rate using that system.

These attempts required the establishing of communication between controllers and the Progress via Russian Ground Station (RGS) passes. However, that proved to be problematic.

“The Russian Ground Control team continued troubleshooting attempts to recover Progress during the ground passes, but were unsuccessful. Onboard video obtained by the ground showed the vehicle spinning/tumbling at high rate,” added the notes, as the teams concurred on the decision to class Progress M-27M as LOM (Loss Of Mission).

“MCC-M confirmed over the loops to Flight Director that they are no longer pursuing 59P Docking to ISS.” The ISS crew was asked to look out for the Progress when both vehicles were in close proximity, which resulted in a collection of long range photos of the Progress M-27M still in its spin, deep into the distance.

The reason for the failure of the Progress mission is currently unknown, as confirmed by high ranking Russian politician Dmitry Rogozin on Friday. The main working theory appears to center around a problem with the Soyuz 2-1A third stage, causing an off-nominal staging event, but this has not yet been confirmed.

The impacts of Progress M-27M’s loss will be felt by the orbital outpost, albeit without any serious consequences.

The Progress vehicle is part of a supply chain of Agency and Commercial Visiting Vehicles (VVs) that are vital to the continued human presence on the Station.

Contingency supply levels are always maintained with large margins, with the loss of M-27M not an immediate concern. However, last year’s loss of the Cygnus spacecraft – and retirement of Europe’s ATV – has placed extra considerations on the consumable levels for the Station.

Providing another supply vehicle isn’t lost in the near-term manifest – mostly relating to the impacts of the resulting standdown period during a post-failure investigation – it will continue to be business as usual on the Station.

Sources note the limiting consumables for the six member crew will last until early/mid-August if no additional supplies are received. The immediate worst case scenario would be to reduce the ISS crew size.

However, the next vehicle set to arrive with supplies is the CRS-7 Dragon, set for launch on a Falcon 9 v1.1 next month. Additionally, the next Progress vehicle may also remain on schedule, especially if the cargo ship is exonerated for the M-27M loss, given the next launch will involve the Soyuz-U carrier, as opposed to the Soyuz 2-1A involved this week. 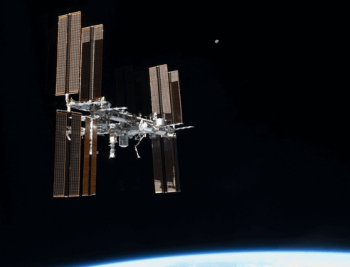 Other impacts are also under consideration, such as the ISS configuration, now that it is minus one docked Progress.

“The GNC team is working to determine an ISS attitude control plan for Soyuz undocking and other dynamic events. Additional impacts to visiting vehicles will be determined on a case by case basis.” 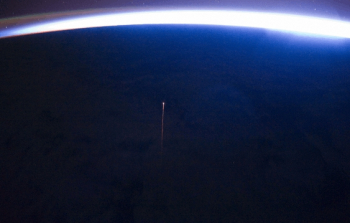 The final impact relates to the upcoming demise of Progress M-27M, when it re-enters in the coming days. At present, Progress will suffer from an uncontrolled re-entry, which mainly relates to being unable to guide the Progress to its usual disposal corridor over an ocean mass.

“Per Knowledge Base Entry 4571, it’s expected that 59P will reenter the atmosphere sometime between May 7 – 11 depending on atmospheric conditions,” JSC notes added. “The fall zone of unburned debris in the atmosphere could be anywhere in the range between 52 degrees south and 52 degrees north latitude. Further safety impacts are being assessed.”

The vast majority of the vehicle won’t – as designed – survive the plunge through Earth’s atmosphere. Any potential hardware that may survive – such as the heavy docking mechanism – is also highly unlikely to threaten people on the ground based on probability.

Uncontrolled reentries are not an uncommon occurrence and usually occur over water, desert or unpopulated areas. Not one person has ever been hit by any piece of reentering satellite or debris in the six decades of space flight.

Further refinements to the expected entry date are expected next week.