As NASA continues development of its new heavy lift Space Launch System (SLS) rocket, testing of the vehicle’s various launch support systems, including the all-important hydrogen burn-off system, or Radial Outward Firing Initiators (ROFIs), continue to progress SLS and its hardware toward a debut launch in 2018.

The importance of hydrogen burn-off from the Space Shuttle:

The launch of any space vehicle is a cumbersome, involved, and difficult process, one which involves anticipating for and nullifying all possible pre-launch contingencies.

For vehicles that use liquid hydrogen (LH2) as the propellant for their liquid fueled engines, possible pre-launch contingencies include the build up of free gaseous hydrogen (GH2) in the aft engine area of the vehicle prior to engine start. 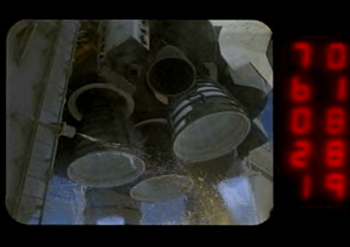 Too much excess hydrogen in the aft during engine start can result in an overpressure blast wave that could damage the launch vehicle and surrounding pad structures.

For NASA, the build-up of free hydrogen in the aft became a critical issue with the design and implementation of the Space Shuttle Program in the early 1980s.

The issue stemmed mainly from the aft engine environment, pad design, and sound suppression system environment interactions coupled with the design of the engine bells for the Space Shuttle’s RS-25 main engines.

Prior to the launch of the first Shuttle mission in April 1981, NASA implemented a hydrogen burn off system by the use of Radial Outward Firing Initiators (ROFIs). 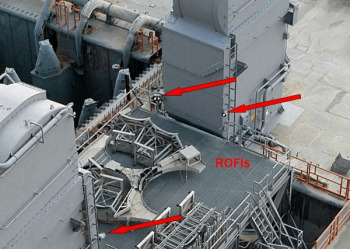 The ROFIs were designed to provide a safe ignition source for any unburned GH2 during the Space Shuttle Main Engine start period.

This was done by the use of small rocket motors in the ROFIs that fired zirconium particles outward into the aft engine area and flooded the area between the main engine nozzles and the exhaust duct entrance with hot zirconium sparklers.

According to David McDaniels, an aerospace engineer in the Fluid Dynamics branch at NASA’s Marshall Space Flight Center, ROFIs “generate enough of a propellant plume to carry the sparks at least 15 feet to the right place to burn off any excess hydrogen.” 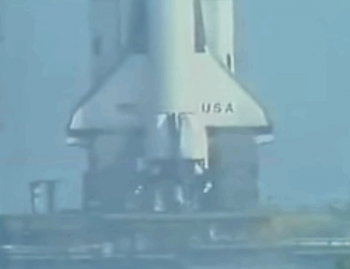 While extensive pre-flight testing was done on the new ROFI system prior to its use on the pad, the first real test of the system in the launch environment came during the Flight Readiness Firing (FRF) on 20 February 1981 of the Shuttle Columbia and the STS-1 stack.

During this FRF, the ROFIs were timed to ignite at the moment of engine ignition, at T-3.3 seconds in the countdown.

Post-FRF evaluation of the aft engine environment during the engine start period revealed that while the ROFIs burned off some of the free gaseous hydrogen in the aft area, the effectiveness of the system was not entirely as expected — nor were the levels of free hydrogen left in the aft area at the time of engine start. 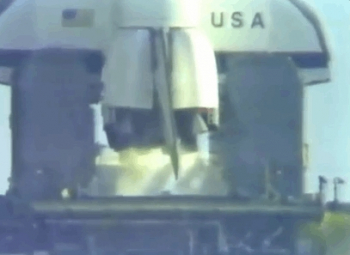 Engineers and launch processing personnel quickly altered the timing of the ROFI firing sequence in the countdown to occur prior to engine start at the T-7 second mark for STS-1.

Following the launch of STS-1, ROFI performance at their new ignition time was found to be within the predicted range, as was the level of free hydrogen left in the aft area at the time of main engine start.

With the alteration of several countdown parameters to align T0 with the moment of Solid Rocket Booster ignition for STS-2, the ROFI ignition time moved to the T-10 second mark, placing ROFI ignition 3.4 seconds prior to main engine start – where it remained for the duration of the Shuttle Program.

Moreover, from STS-1 through the conclusion of the Shuttle Program in June 2011 with STS-135, the ROFI system worked as intended every single time it was used. 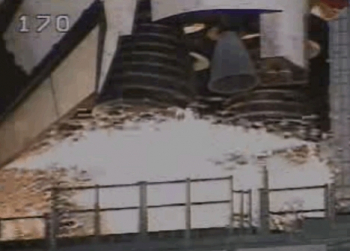 The last second abort at T-7 seconds during the STS-93 launch campaign of Shuttle Columbia in 1999 was caused by a false sensor indication of a higher than allowable hydrogen concentration in the actual aft engine compartment of Columbia herself.

The ROFI system successfully reduced the free hydrogen count around the exterior environment of the vehicle during that STS-93 launch attempt.

Likewise, the hydrogen fire that occurred following the pad abort for Shuttle Discovery’s maiden voyage on the STS-41D mission on 26 June 1984 was not the result of a failure of the ROFI system. 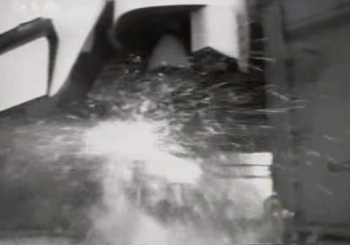 In fact, the ROFI system was not altered following the 41D pad abort. Instead, potential hydrogen fires following a pad abort were dealt with prior to their start by an enhancement to the use of the sound suppression and fire suppression systems on the launch pad.

Moreover, throughout the entirety of the Shuttle Program, the ROFI system was only used in the moments prior to main engine start to minimize the overpressure wave that could be caused by the ignition of free hydrogen at main engine start.

At all other times in the countdown, free hydrogen around the aft of the vehicle was vented through the open air exhaust ducts on the Shuttle launch pad.

Likewise, free hydrogen in the aft following a launch pad abort was either vented naturally through the open air ducts or prevented from serving as a source of ignition by the fire suppression systems on the pad.

Like the Shuttle, the SLS rocket will use hydrogen as its primary propellant source and will use heritage hardware from Shuttle, primarily in the form of RS-25 engines on the bottom of its core stage. 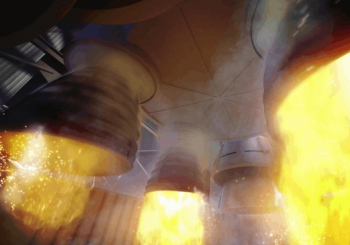 However, despite the similarities in hardware and some architectural components, the SLS rocket is a very different vehicle in terms of its pre-launch environment than the Space Shuttle was.

However, these environmental differences do not negate the need for SLS to have a ROFI/hydrogen burn-off system like Shuttle needed.

This means that SLS will make use of a hydrogen burn off system to ensure that all free hydrogen in the aft of the vehicle is safely burned away to safe levels prior to the ignition of the four core stage engines.

As with shuttle, the SLS hydrogen burn off igniters will fire approximately 10 seconds before lift-off.

But the differences between the launch pad configurations of SLS and its sound suppression system and those of the Shuttle era make using a direct copy of the Shuttle ROFI system impractical.

Thus, a new design is needed for SLS. 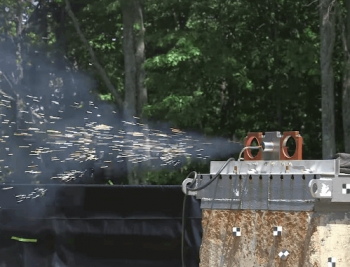 As with all things spaceflight, implementation of this new design necessitated a series of tests for the new burn-off system configuration, and NASA and SLS Program engineers at the Marshall Space Flight Center began this series of nine (9) tests earlier this month.

During the tests, the hydrogen burn off igniters were fired and monitored by high-speed cameras to measure the throw distance and area coverage of the zirconium particles.

The various tests were also carried out under various crosswind environment conditions that the SLS rocket could experience on the launch pad during final countdown and launch operations. 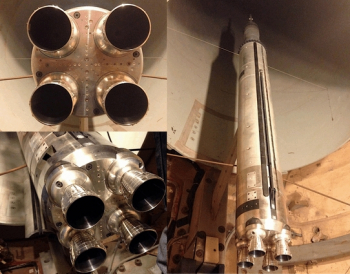 According to documents obtained by NASASpaceflight.com, NASA plans a robust monitoring system for the hydrogen burn-off system on the pad during SLS pad testing and launch events.

According to a baseline SLS Program (SLSP) Imagery Systems Requirements Document, available for download on L2, “It is of value to image the operation and performance of the hydrogen igniter system.”

The Core Auxiliary Power Unit exhaust areas and the main Core Stage plume hole are additional areas where continuous monitoring of the ROFI operation and spray areas will be conducted during all SLS launches.

Monitoring of these areas will help not only solidify the operational effectiveness of the ROFIs during SLS’s debut launch, but will also provide post-flight performance analysis supporting the flight readiness for future SLS missions – thus ensuring a continuation of the safety the ROFI system provided Shuttle for 30 years.

Images: NASA and L2 artist Nathan Koga via L2’s SLS sections, which includes, presentations, videos, graphics and internal – interactive with actual SLS engineers – updates on the SLS and HLV, available on no other site.)