European scientists have confirmed their brave little lander Philae has managed to regain communications with its Rosetta mothership. The lander had been in hibernation after its sporty landing on Comet 67P/Churyumov-Gerasimenko but awoke some time ago. However, Sunday’s announcement marked the first successful re-establishment of communication between the spacecraft.

The Rosetta mission was launched over 10 years ago from Europe’s Spaceport in Kourou on an Ariane 5G rocket.

The Rosetta spacecraft, with her Philae lander, conducted an odyssey that would take them on an orbit of Jupiter, passing by Earth three times, Mars once and also flying past two asteroids. Their destiny was to arrive at a comet 800 million kilometres (500 million miles) from the Sun. 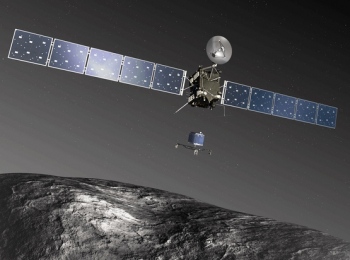 Ahead of the rendezvous, Philae was woken from its hibernation and prepared for its big day as Rosetta began to orbit 67P/Churyumov-Gerasimenko.

Philae’s stunning departure – with huge interest from around the world – went to plan.

However, problems involving the cold gas thruster system that was to aid the lander’s touchdown – along with the issue of the harpoons failing to fire to hold Philae in place – meant the spacecraft was unable to remain in the designated landing area. 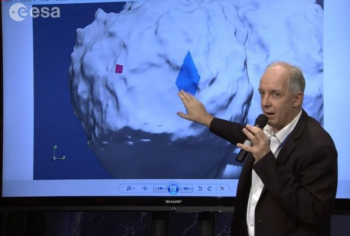 It was then revealed that Philae’s location was not ideal for its solar arrays, required to gain power from the Sun. 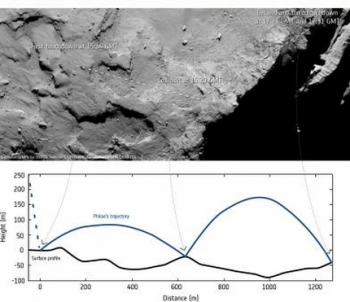 The lander was shadowed by a cliff, a major issue – not helped by the fact the lander was not in its correct orientation, hindering the power collection of the arrays that are located around its body.

After a large amount of ingenuity from the Rosetta and Philae teams, a final science drive was conducted with the remaining battery power, prior to communications being re-established for the key transmission of data from Philae’s work on the comet. 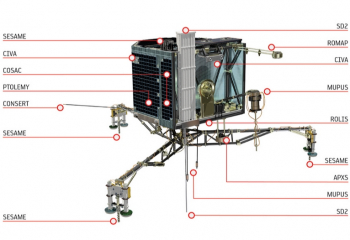 Soon it was shown Philae was fighting against fading battery power, as expected. However, the intrepid lander showed true fighting spirit and kept firing data at Rosetta, ahead of it being transmitted back to Earth.

Although the mission was already classed as an incredible success, there was a small amount of hope the lander could get lucky if sufficient sunlight falls on the solar panels to generate enough power to wake it up. 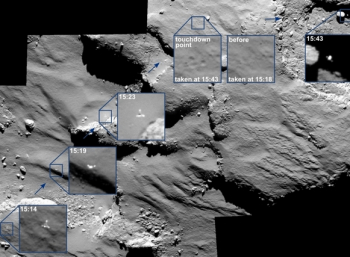 The small possibility of Philae returning to life would come as the heavenly body moved farther into the inner reaches of our Solar System, potentially allowing sunlight to recharge the lander’s arrays.

With Rosetta still in orbit, searches continued to find the lander on the surface. The likely area was known, but no confirmed visual sightings had been made during the passes.

“We have been able to narrow down Philae’s location to an area of approximately 16 by 160 metres,” noted Project Leader Stephan Ulamec from the German Aerospace Center just last week. 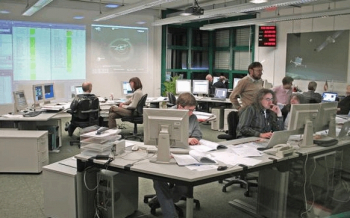 ESA noted that more than 300 data packets were analysed by the teams at the Lander Control Center at the German Aerospace Center (DLR), as the lander finally managed to make contact and confirmed it was back in business.

“Philae is doing very well: It has an operating temperature of -35C and has 24 Watts available,” added Dr. Ulamec. “The lander is ready for operations.”

The announcement added that this first communication in months lasted for 85 seconds, with the data confirming the lander had been awake for some time – but had been unable to send a signal to Rosetta.  That changed late on Saturday night, prior to Rosetta forwarding the call to Earth.

“We have also received historical data – so far, however, the lander had not been able to contact us earlier,” Dr. Ulamec added.

With Philae back in operations, the team now expect another surge of information, with ESA adding there is still more than 8000 data packets in Philae’s mass memory which will give the DLR team information on what happened to the lander in the past few days on the comet.

As the comet continues its path towards the sun, Philae should be able to gain the required power to continue operations for some time. Specific tasks will be decided by mission managers over the coming days and weeks – which may include the use of the lander’s drill.

(Images via ESA and DLR)