Italian veteran Paolo Nespoli to return to the ISS

The European Space Agency (ESA) has announced Paolo Nespoli is to return to the International Space Station (ISS) in 2017. The veteran Italian astronaut will be making his third trip to the orbital outpost, following missions in 2007 and 2010 – the latter concluding with stunning and unique photography of Shuttle Endeavour docked to the Station.

Paolo Back To The ISS:

Nespoli will become part of Expeditions 52 and 53 when he launches on a Russian Soyuz in May 2017.

A qualified professional engineer, pilot and an advanced diver, Nespoli served in the Italian army between 1977 and 1984 – becoming qualified as master parachutist, parachutist instructor and special forces operator.

Nespoli left the army to complete his studies and work as a design engineer in Florence, where he conducted mechanical analysis and provided support for qualification of the flight units of the electron gun assembly, one of the main components of the Italian space agency’s Tethered Satellite System.

He joined ESA’s European Astronaut Centre in Cologne as an astronaut training engineer. In 1995, he was part of the EuroMir project at the Agency’s ESTEC establishment in Noordwijk in the Netherlands, where he was responsible for the team that prepared, integrated and supported the payload and crew support computer used on the Russian space station Mir. 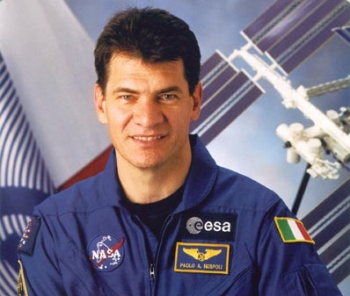 The following year he relocated to NASA’s Johnson Space Center where he worked in the Spaceflight Training Division. In 1998 he was selected to be an astronaut by the Italian space agency, joining ESA’s European Astronaut Corps.

Returning to JSC, Nespoli was assigned to the XVIIth NASA Astronaut class, training on Shuttle, Station and EVA tasks.

His first space flight came during his two-week Esperia mission on Shuttle Discovery’s STS-120 in 2007. One of his main tasks was to help install the Node-2 module on the Space Station – aided by his robotic arm training at JSC. 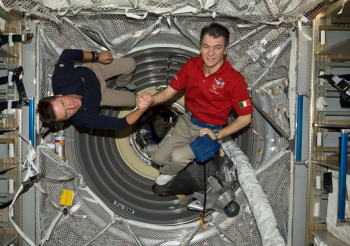 During his time on Station he welcomed ESA’s second Automated Transfer Vehicle (ATV) during its docking to the ISS.

Nespoli got to see the vehicle from outside of the confines of the Station when he completed his mission, although the photographs he took will be mainly remembered for the iconic views of Shuttle Endeavour docked to the ISS during her STS-134 mission.

This historic event was many months in the planning and was originally set to take place during STS-133. 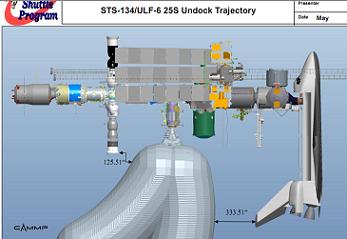 With a vast amount of evaluations clearing the concerns relating to the event, the Soyuz TMA-20 crew – comprised of Soyuz commander Dimitri Kondratyev of Russia, and flight engineers Cady Coleman of the US and Nespoli – suited up, conducted leak checks, and enter their Soyuz capsule per nominal procedures. 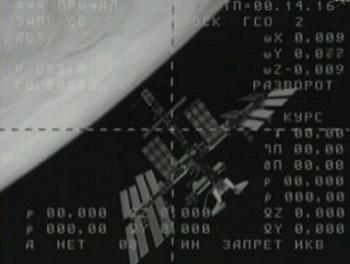 Once the undocking attitude was achieved, the ISS entered a period of free drift and Soyuz TMA-20 undocked from the ISS.

Commander Kondratyev then began to manually fly the Soyuz away from the ISS, and the Russian thrusters resumed attitude control of the station.

Once the Soyuz had reached 200 meters distance from the Station – around 10 minutes after undocking – Kondratyev held Soyuz’s position and Nespoli opened the hatch between the Descent Module – where the crew were seated for the undocking – and the Orbital Module. 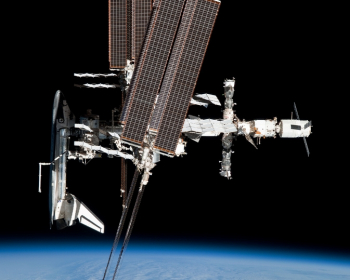 After about eight minutes of set-up procedures, Nespoli began to take the imagery of the Shuttle/ISS stack using a High Definition video camcorder and a High Resolution digital camera.

Five minutes later – and with the Soyuz positioned slightly above the ISS due to the need to keep the Sun out of Kondratyev’s eyes – the ISS began a 15 minute, 129 degree manoeuvre (at 0.2 degrees per second) which placed the ISS in the +YVV (plus Y axis in Velocity Vector) attitude, at a 90 degree side-on angle to the Soyuz.

Nespoli was filming and photographing the manoeuvre throughout this period, and also occasionally used a handheld laser range finder to assist Kondratyev with his manual station keeping. 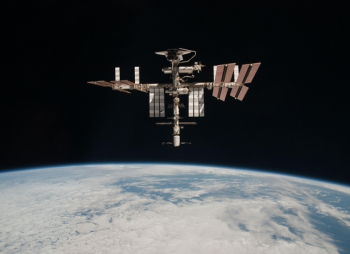 This was the first time that a Soyuz had “station kept” with the ISS at 200 meters – and also during a period that the ISS had changed attitude.

Nespoli continued to image the station for about 10 minutes after the manoeuvre was completed, whereupon Kondratyev conducted a final separation burn to take the Soyuz away from the station.

Following this second flight to the ISS, Nespoli worked at ESA’s ESRIN centre in Italy and at the European Astronaut Centre in Cologne.

Assigned to his third mission to the ISS, the Italian has now started training at the Gagarin Cosmonaut Training Centre near Moscow.

The new mission is part of a barter agreement between NASA and Italy’s ASI space agency involving ESA astronauts. It will be ASI’s third long-duration flight, following Luca Parmitano’s Volare in 2013 and Samantha Cristoforetti’s Futura this year.

(Images via ESA and NASA).

NTSB SpaceShipTwo findings will serve to strengthen our resolve – Branson

Mission to Phobos – The precursor to human Mars landing