STS-114 was the Shuttle mission that returned NASA to active flight status following the tragic loss of Columbia. But STS-114, more than any other flight of its time, endured significant changes in the wake of the Columbia Accident Investigation Board’s recommendations and helped pave the way for a safe and successful conclusion to the Shuttle Program.

For what would end up being one of the most famous, followed, photographed, and watched missions of the entire Space Shuttle Program, STS-114 was a relatively unanticipated flight for much of the general public throughout 2002 and January 2003.

A Logistics Flight (LF) to the International Space Station (ISS), STS-114 was a resupply, solar array truss delivery preparation, and crew rotation run to the ISS.

Like all Shuttle missions, STS-114 was years in the making.

NASA – along with its international partners in the ISS – carefully choreographed the mission’s primary payload with the meticulous schedule of ISS construction and outfitting needs.

To meet the needs of the mission, NASA assigned four principal crewmembers to STS-114 in August 2001, with the remaining three seats of the mission reserved for ISS crew rotation. 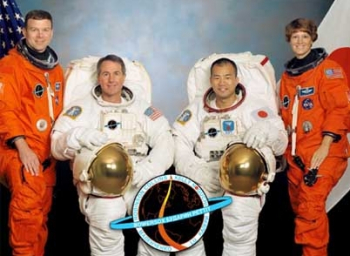 For the primary crew of STS-114, the mission was set to be Commander Eileen Collins’ fourth spaceflight and second as Commander of a Space Shuttle mission. Jim Kelly would make his second spaceflight, Soichi Noguchi his first, and Stephen Robinson his fourth. 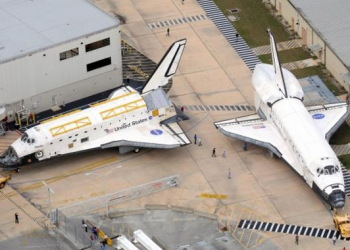 As the crew entered training in 2001, NASA officially baselined (assigned) the orbiter Atlantis to STS-114 after a series of mission launch date compromises between the construction and outfitting needs of the ISS, the upcoming and highly needed refurbishment flight to Hubble (assigned to Columbia to preserve Discovery, Endeavour, and Atlantis for weight-sensitive ISS missions), and the already repeatedly delayed STS-107 microgravity science flight baselined to orbiter Columbia.

When the STS-109 mission to Hubble on Columbia gained priority over STS-107/Columbia, NASA opted to give STS-107 priority to STS-114. 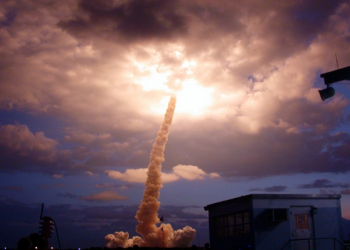 Based on Columbia’s needed turn-around time from the STS-109 Hubble mission to the microgravity research flight (which required significant alterations of Columbia’s payload bay), STS-107 was scheduled between the STS-113/Endeavour and STS-114/Atlantis flights.

By late 2002, the main components of STS-114 began taking shape with the stacking of the Solid Rocket Boosters (SRBs) in High Bay 3 of the Vehicle Assembly Building (VAB).

On 4 January 2003, the STS-114 crew performed inspections on Atlantis and their flight hardware as Atlantis progressed through her final month of Orbiter Processing Facility (OPF) processing for the mission. 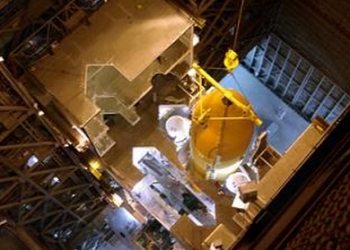 Also in January 2003, the External Tank (ET) for the mission was brought over from its checkout cell in the VAB and mated to the SRB stack.

With SRB/ET mating complete, Atlantis rolled from her OPF berth into the VAB on 29 January 2003, where she was connected to the hoisting mating sling/crane and lifted into High Bay 3.

Atlantis was hard mated to the External Tank by the following day, 30 January 2003.

As Atlantis and the STS-114 stack began initial post-mating integrated stack inspections and checkout operations in the VAB, tragedy befell NASA on 1 February 2003 – just one month before the scheduled launch of STS-114/Atlantis – when the Shuttle orbiter Columbia broke up during reentry at the end of the STS-107 mission.

The loss of Columbia and her seven crewmembers put an immediate stop to Shuttle operations as NASA began the difficult and grim task of recovering the pieces of Columbia and remains of her crew that survived the reentry breakup and initiated an investigation as to the loss of the pioneer orbiter and her crew.

As the initial days of the investigation and recovery passed, Atlantis remained in the VAB as NASA evaluated options in the immediate aftermath of the loss of Columbia. 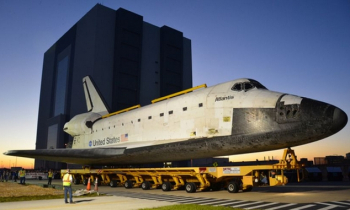 In mid-February, NASA decided to de-mate Atlantis and return her to an OPF.

To facilitate de-stacking and avoid interference with Columbia debris recovery and return efforts, the STS-114/Atlantis stack rolled around from High Bay 3 to High Bay 1 of the VAB on 25 February 2003, where de-stacking operations commenced.

Atlantis’ team then moved her back to the OPF she had vacated just one month prior to await the Columbia Accident Investigation Board’s findings on the loss of Columbia.

Throughout the remainder of 2003, the External Tank was subsequently de-mated from the SRBs, and the SRBs themselves were finally de-stacked in late 2003.

On 26 August 2003, the Columbia Accident Investigation Board (CAIB) released their official report into the loss of the Shuttle Columbia as well as their list of recommended and mandatory safety improvements for the Shuttle fleet.

In all, the CAIB made 29 safety improvement recommendations to NASA, 15 of which were classed as mandatory Return To Flight (RTF) improvements.

By far, the most intense of the mandatory recommendations fell into the Thermal Protection System (TPS) category, with the major emphasis placed on eliminating all External Tank TPS debris shedding with particular focus to the bipod strut attach point to the ET. 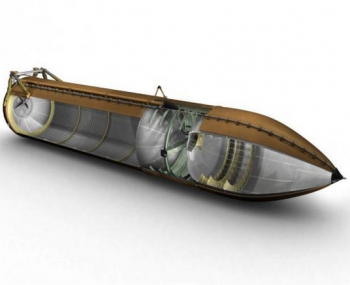 This bipod strut attach point was where the suitcase-sized piece of foam that struck Columbia during ascent liberated from and where the previously large chunk of foam during the STS-112/Atlantis mission in October 2002 liberated from – which caused significant damage to the aft skirt of the right-hand Solid Rocket Booster on that mission.

Other major TPS recommendations included the development and implementation of comprehensive inspections through non-destructive evaluation techniques for the Reinforced Carbon Carbon panels on the wing leading edges of the Orbiters during their post-mission turn around periods as well as the development and implementation of on-orbit inspection and TPS repair capabilities for nominal and off-nominal missions to the ISS.

Specifically, the CAIB noted that these new on-orbit inspection and repair techniques had to be available for non-ISS missions as well as for missions that failed to reach the Station or were damaged after leaving the Station. 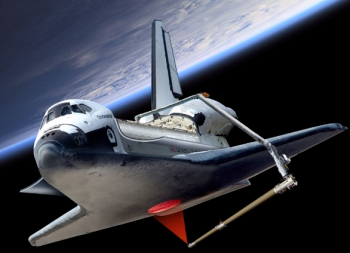 Under the imaging category, the CAIB mandated that all future Shuttle missions have at least three “useful” camera angle views from liftoff through SRB separation and that high-resolution images of the External Tank be taken and downlinked to the ground immediately after ET-Orbiter separation.

The CAIB also mandated that high-resolution images of the underside of the Shuttle Orbiter wings and forward section be taken during the mission and that the Memorandum of Agreement with the National Imagery and Mapping Agency be amended to make the imaging of every Shuttle flight while on orbit a standard requirement. 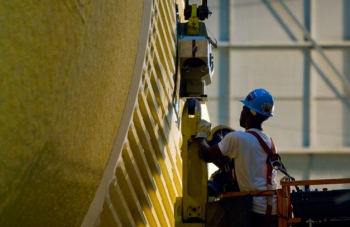 Among the other mandatory requirements from the CAIB included testing and qualification of the bolt catchers between the SRBs in the External Tank, a requirement that at least two employees be present for final closeout and inter-tank area handspring procedures, and that KSC Quality Assurance return to the “straightforward, industry-standard definition of ‘foreign object debris’ and eliminate any alternate and statistically deceptive definitions like ‘processing debris.'”

The CAIB also mandated that the Shuttle fleet maintain a flight schedule that met with all necessary timetables for turn-around and post-flight processing operations. 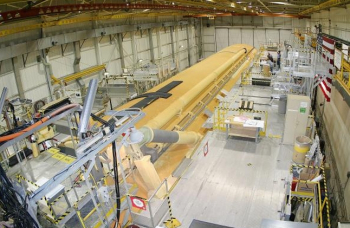 The CAIB further instructed NASA to make all closeout engineering photos digital so that their availability for on-orbit troubleshooting would be immediate.

The CAIB also mandated that NASA redefine numerous management aspects of the program, including Mission Management Team training exercises of unknown situations and Loss of Crew and Vehicle situations as part of standard mission training and decision making practices.

NASA immediately solicited an independent review board to oversee their compliance with the CAIB’s mandatory recommendations.

As NASA set about designing and implementing these safety upgrades, questions swirled from an eager public and media as to when the Shuttle fleet would return to flight. 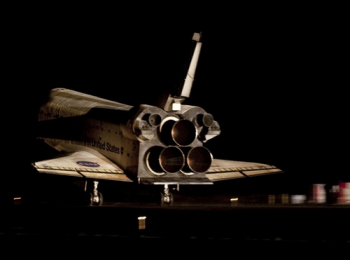 For STS-114 and Atlantis and her crew, this cultural shift and implementation of CAIB recommendations meant a drastic change to not only Shuttle operations but to the STS-114 flight as well.

With the loss of Columbia, the Space Shuttles no longer carried the primary responsibility for Space Station crew rotation missions.

Instead, crew rotation flights shifted to the Russian Soyuz vehicle with only single person rotations taken up by Shuttle flights for the remainder of the program. 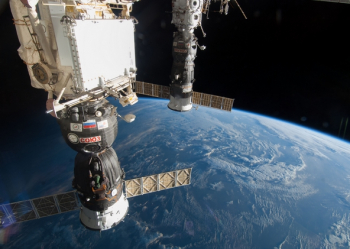 Likewise, with the Shuttles grounded for what became 2.5 years following the Columbia accident, the Russian Progress resupply vehicle became the Space Station’s only resupply craft.

This forced a reduction in the total number of crewmembers aboard the ISS from three to two until the Shuttles’ major up mass capabilities could once again sustain a Station crew of three.

With crew rotation flights shifting to Russian control, STS-114 lost its crew rotation objective, and three seats aboard the flight were now in need of astronauts.

NASA formally assigned Andrew Thomas to the MS3 slot on the mission, Wendy Lawrence to the MS4 slot, and Charles Camarda to the MS5 slot.

All four principal crew members who had already been assigned to the mission remained. 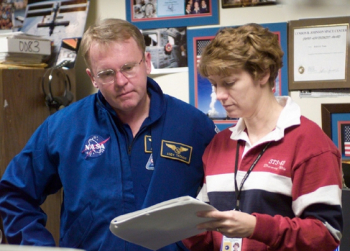 But with the amount of time needed to implement the necessary safety modifications for a safe and successful launch, the STS-114 mission was no longer a simple logistics run to the Station.

With the Station’s crew down to two, STS-114 would now have the added responsibility of restocking and resupplying the Station to get it back to full operating capabilities ahead of a return to a three person crew.

The mission would now also have to prepare the Space Station for a resumption of construction efforts as well as bring up spare parts and equipment for the Station that were beginning to wear. 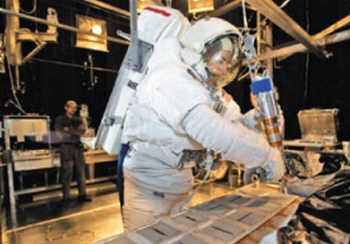 Moreover, has NASA began developing the in-flight repair techniques for a Shuttle orbiter’s TPS, engineers quickly realized that some of these techniques could not be adequately tested on the ground.

This meant that new experiments would have to be devised and a spacewalk, or multiple spacewalks, conducted on STS-114 to not only prepare the Station for a return to construction but also to test these new Thermal Protection System repair techniques while on orbit.

And the more NASA developed these repair techniques, the greater the number of tests to be performed on orbit became. 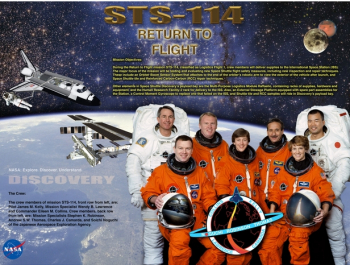 Under this new split mission plan, STS-114 remained with Shuttle Atlantis and STS-121 was baselined to the Orbiter Discovery.

The stage was now set for the final campaign toward STS-114 and the Shuttle’s triumphant return to flight.

(NASASpaceflight.com’s coverage of the 10-year anniversary of the launch of the STS-114 mission and its enduring legacy will continue this weekend.)