The launch, which was the thirtieth for the Delta IV, introduced to the single-core vehicle the upgraded first stage which was first tested on the Delta IV Heavy launch of NROL-15 in 2012.

Featuring structural changes to increase commonality across the rocket’s different configurations and an uprated RS-68A engine. Only previously used on the NROL-15 launch, these changes are to become standard across the Delta IV fleet in an effort to reduce production costs. 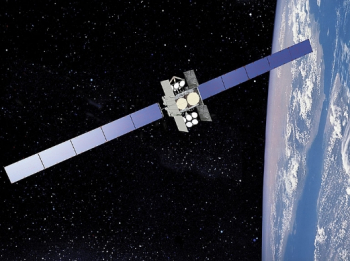 The payload for the rocket’s mission was the Wideband Global Satcom 7 (WGS-7) communications satellite.

The first Block II Follow-On spacecraft in the US Air Force’s WGS program, WGS-7 introduces enhancements over its Block II predecessors with increased downlink channels and bandwidth. Further upgrades are expected to follow from the next satellite.

The 6,000 kilogram (13,000 lb) spacecraft carries a Ka and X-band communications payload. The spacecraft is designed for a service life of fourteen years.

Constructed by Boeing, the WGS spacecraft are based on the BSS-702 satellite bus. Twin solar arrays provide power for the spacecraft’s systems while an R-4D-15 liquid propellant motor will be used for major maneuvers such as orbit circularization.

An electric propulsion system, consisting of four XIPS-25 ion thrusters, will be used for stationkeeping. The contract to build WGS-7 was signed in September 2011, although long-lead parts had been under construction from August 2010.

Initiated and led by the United States Air Force, the WGS program has become multinational with Australia financing the sixth spacecraft in return for participation and international investment also facilitating a further vehicle.

The Wideband Global Satcom program, which was originally named Wideband Gapfiller Satellite, was intended to serve as an interim between the previous Defense Satellite Communications System (DSCS) and the then-planned Transformational Satellite (TSAT) series.

Since TSAT’s cancellation in 2009, WGS has – along with the Advanced Extremely High-Frequency constellation – become one of the Air Force’s primary communications satellite program.

The first WGS spacecraft, USA-195, was deployed by an Atlas V rocket in October 2007. Two further Block I satellites followed in April and December 2009 before Block II launches began in 2012. 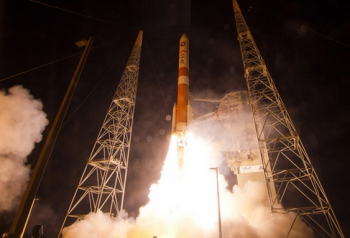 The most recent two launches, both of Block II vehicles, took place in May and August 2013. Launches on the Atlas V make use of the 421 configuration while Delta IV missions have used the Medium+(5,4) variant. Since the first two spacecraft used the Atlas V, all subsequent WGS satellites have flown atop the Delta.

Since 2006, the manufacture and operation of both vehicles, along with Boeing’s older Delta II vehicle, has been transferred to United Launch Alliance (ULA). 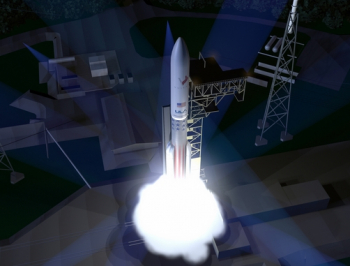 In March, ULA announced its intention to phase out the Delta IV in favor of the Atlas V in the short term and in the long term the Vulcan rocket they are developing to replace both EELVs.

Delta IV Medium launches are expected to cease in 2018 or 2019 with the Heavy continuing to fly occasionally until an alternative is available.

The Delta IV’s maiden flight carried the Eutelsat W5 (later Eutelsat 33B) communications satellite for French telecommunications firm Eutelsat – the only fully commercial launch the rocket has made. All of the Delta IV’s flights since then have carried payloads for the US Government, which are predominantly of a military nature.

The first flight of the Delta IV Heavy, which was funded by the US Air Force, carried only a demonstration payload and two university microsatellites. That launch resulted in the vehicle’s only failure to date after cavitation in oxidizer lines led to the premature depletion of the first stage and both boosters. 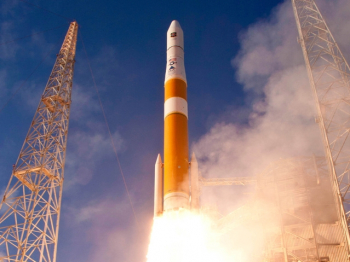 Between 2006 and 2010 three Geostationary Operational Environmental Satellite (GOES) weather satellites were launched by the Delta IV. While they were launched as commercial payloads, their operator – the National Oceanic and Atmospheric Administration – is a US Government agency. 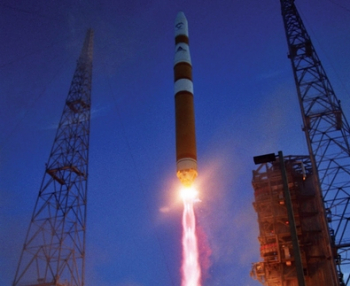 For the launch, which had flight number Delta 372, the Medium+(5,4) configuration was used. This featured four GEM-60 solid rocket motors and a five-meter diameter upper stage.

Departing from Cape Canaveral’s Space Launch Complex 37B, Delta 372’s mission began with ignition of the first stage main engine five seconds ahead of liftoff. The solid rocket motors ignited a fraction of a second before the countdown reaches zero, with the Delta achieving liftoff when the thrust from the RS-68A engine exceeded her weight.

Beginning a series of pitch, yaw and roll manoeuvres to attain attitude for her ascent to geosynchronous transfer orbit, Delta 372 aligned herself along a launch azimuth of 93.46 degrees heading East over the Atlantic Ocean. Forty five seconds into the flight the vehicle experienced maximum dynamic pressure. 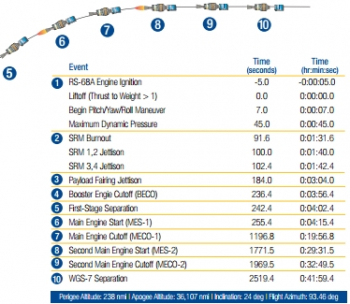 At the 91.6-second mark in the flight the solid motors burned out. Their spent casings were jettisoned in pairs, 2.4 seconds apart, with the first two separating 100 seconds after liftoff. The payload fairing separated from around WGS-7 three minutes and four seconds into the flight.

Three minutes and 56.4 seconds after lifting off from Cape Canaveral, the Delta’s first stage propellant was depleted and the stage cut off. Six seconds later it separated from the rocket, allowing the second stage to extend the nozzle of its RL10B-2 engine and, thirteen seconds after staging, igniting to continue its ascent.

The Delta IV’s upper stage, the Delta Cryogenic Second Stage (DCSS), is powered by the single RL10B-2 engine and can be flown in versions with diameters of four or five metres depending upon payload requirements. Like the CBC, the DCSS burns liquid hydrogen and liquid oxygen.

The first burn of the second stage lasted fifteen minutes and 41.4 seconds. Following a nine-minute, 25.3 second coast the DCSS restarted for a further three minutes and eighteen seconds to establish the final orbit for spacecraft separation.

The launch was the thirty-seventh orbital launch attempt of 2015 and the Delta IV’s second of two launches planned this year following March’s successful deployment of the GPS IIF-9 satellite. The Delta IV will next be in action in February 2016 with a Medium+(5,2) vehicle deploying the NROL-45 mission for the National Reconnaissance Office.

ULA’s next launch is currently scheduled for 31 August with an Atlas V carrying the MUOS-4 communications satellite to orbit for the US Navy.