Arianespace has conducted its fourth Ariane 5 mission of the year with the successful launch of two telecommunication satellites. Eutelsat 8 West B and Intelsat 34 rode uphill on the European workhorse, with the launch taking place from the European Spaceport in Kourou, French Guiana at 20:34 UTC after a short technical delay.

Arianespace is in the midst of a busy launch campaign, utilizing its range of rockets to work through a hefty order book. This was the company’s seventh launch of 2015.

The Ariane 5 is the company’s workhorse, tasked with the majority of its missions.

The mission for two long-time Arianespace customers – Eutelsat and Intelsat – carried the designation Flight VA225 to signify the 225th launch of an Ariane-series vehicle.

EUTELSAT 8 West B – which will be operated by Eutelsat and the Egyptian satellite company Nilesat – occupied the upper passenger position in Ariane 5’s dual-payload configuration.

Produced by Thales Alenia Space, the satellite was launched en route to the 7/8 degrees West neighborhood selected by over 1,000 TV channels to reach an audience of 52 million homes. 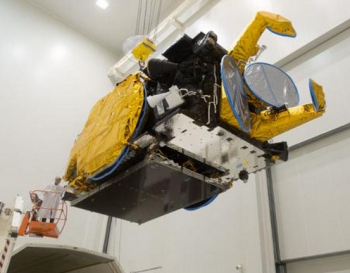 Eutelsat and Nilesat have progressively built a comprehensive broadcast infrastructure at this position, comprising satellites designed for Direct-to-Home reception in a vast footprint stretching from Morocco to the Gulf.

The bird is based on a 5.8-metric-ton-class relay platform built by Thales Alenia Space, featuring 40 operational Ku-band transponders.

Separated by the SYLDA (SYstème de Lancement Double Ariane) – the other passenger, Intelsat 34, was in the lower payload position on Ariane 5, with a liftoff mass of more than 3 metric tons.

Intelsat 34 was built by SSL (Space Systems/Loral) of Palo Alto, California and is designed to deliver service for 15 years or longer.  It will bring replacement relay capacity for two other satellites at 304.5 degrees East longitude.

“Intelsat and SSL have a close working relationship based on many years of experience and a mutual commitment to quality, reliability and customer service,” noted John Celli, president of SSL.

Intelsat 34 is the 50th satellite that SSL has provided to Intelsat. 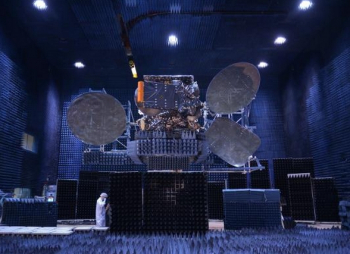 The satellite is based on the SSL 1300 platform, which has the flexibility to support a broad range of applications and technology advances.

The satellite uses SSL’s heritage electric propulsion system, the SPT-100, which is actively in use on 17 satellites with more than 40,000 hours of successful on orbit operation.

“SSL has been an important manufacturing partner of Intelsat for more than 35 years and has designed and delivered nearly half of the satellites in the Intelsat fleet,” added Thierry Guillemin, EVP and Chief Technology Officer of Intelsat. 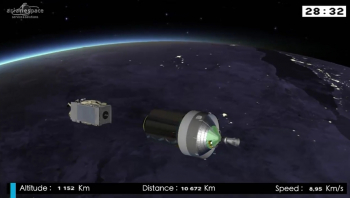 With a total payload mass of 9,922 kg, EUTELSAT 8 West B and Intelsat 34 became the 513th and 514th satellites launched by Arianespace. It was also the 50th consecutive Ariane 5 ECA success, a record for GTO launchers. ULA’s Delta II is currently at 98 – although she is a smaller class of rocket.

“Arianespace is very proud of our successful dual launch for the two leading commercial customers of our heavy launcher, Ariane 5. I would like to thank Intelsat and Eutelsat for their unwavering trust and loyalty over more than 30 years,” noted  Arianespace Chairman and CEO Stéphane Israël.

In parallel, payload and launch vehicle activity is underway for three other missions with the company’s complete launcher family.

Next up will be Soyuz flight VS12, scheduled for September 10 with two spacecraft for the European Commission’s Galileo satellite navigation program. 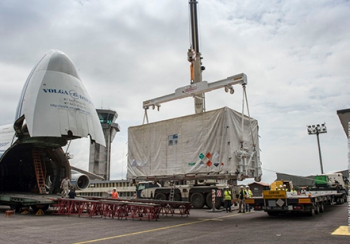 ARSAT-2 – which recently arrived at the Félix Eboué Airport on a An-124 cargo jetliner – is the second of three geostationary satellites to be designed, built and operated with the goal of increasing Argentina’s telecommunications capacity and guaranteeing the same level of connectivity quality to all of its regions.

Arianespace orbited the first of these relay platforms, ARSAT-1, on an Ariane 5 mission last October.