Eyes in the sky are continuing to track super typhoon Soudelor, providing vital Earth Observation data to forecasters tasked with relaying information to those that may be affected by the dangerous Category 5 storm. Numerous weather satellites – and even the RapidScat instrument on the International Space Station (ISS) – are being employed to monitor the super typhoon.

The fleet of satellites in space provide humanity with technology that most people take for granted. However, the global Earth Observation satellites – an ever-evolving constellation of spacecraft – can be classed as life savers.

Monitoring the planet from their lofty positions in the heavens, their array of instrumentation provides key data to scientists and forecasters on the ground, allowing them to relay the information to the public.

This week has once again highlighted the usefulness of the Earth Observation assets. 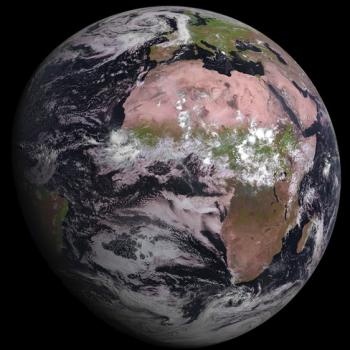 Early on Tuesday one of the latest satellites heading towards its role in space sent back its first image of the planet it will be monitoring.

Launched just last month on an Ariane 5, Meteosat Second Generation-4 (MSG-4) tested its primary instrument – the Spinning Enhanced Visible and Infra-red Imager (SEVIRI) – which builds images of the Earth’s surface and atmosphere in 12 different wavelengths once every 15 minutes.

The successful relaying of the stunning image provided confirmation the spacecraft is performing well and is on its way to becoming fully operational when required. It is currently undergoing six months of commissioning.

While ESA was responsible for the launch and early orbit phase, MSG-4 has since been handed over to EUMETSAT for its future operations.

However, it’s the active fleet of spacecraft that were busy providing images and data on a major threat to several countries in Asia this week. 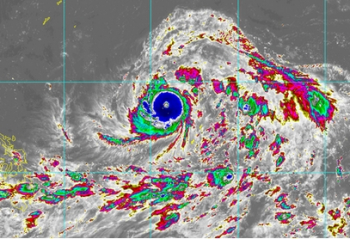 Japan’s Himawari-8 weather satellite – launched just last year atop its H-IIA carrier rocket – provided one of the first insights into the storm.

The Advanced Himawari Imager is the spacecraft’s main instrument. Its sixteen-channel multispectral imager – operating at visible-light and infrared wavelengths – can produce full-disc and area images.

It can produce images at a resolution of up to 500 metres (1,640 feet), with each spectral band being of use for different observations; allowing the satellite to collect data on various factors including cloud cover, temperatures, winds, precipitation and aerosol distribution. 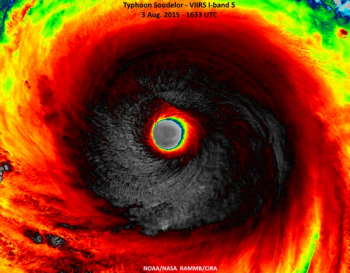 Launched via a Delta II rocket in 2011, NPP sports five instruments that are returning data about Earth’s environment and atmosphere.

One of the instruments onboard is the Visible Infrared Imaging Radiometer Suite (VIIRS) – used to produce visible-light and infrared imagery of the Earth’s surface, at 22 different wavelengths.

This instrument provided both the stunning I-Band image of the storm this week, along with visible-light imagery. VIIRS has been performing as planned despite a slight hiccup during its checkout phase on orbit.

NASA’s Aqua satellite has also been taking data on the storm. The veteran satellite was launched in 2002 and has six Earth-observing instruments on board.

Aqua was originally developed for a six-year design life but has now far exceeded that original goal. It has only lost the use of one of its six primary instruments during its lifetime.

Aqua was the first member launched in a group of satellites termed the “Afternoon Constellation”, or the “A-Train”.

The Moderate Resolution Imaging Spectroradiometer or MODIS instrument aboard Aqua satellite captured a visible-light image of Soudelor that clearly showed its 12-nautical-mile-wide eye. Thick bands of powerful thunderstorms surrounded the storm and spiraled into the center. 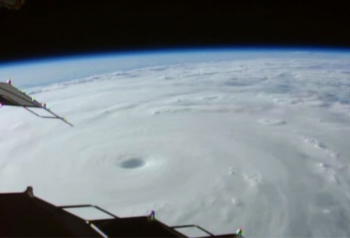 The ISS has also been following the typhoon as the Station passes overhead during its orbits around the planet.

Soudelor was observed by cameras on the outside of the orbital outpost.

Also hosted on the outside of the Station is the RapidScat instrument.

Flown to the ISS inside the Trunk of the CRS-4/SpX-4 Dragon, ISS-RapidScat is studying the Earth’s ocean surface wind speed and direction, returning a lost capability when the SeaWinds scatterometer aboard NASA’s then 10-year-old QuikScat satellite experienced an age-related antenna failure. 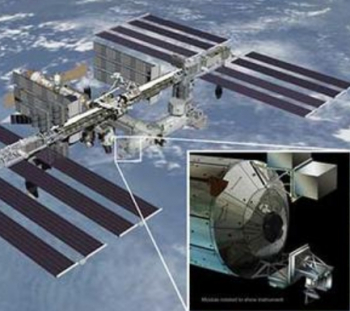 ISS-RapidScat is a low-cost project, assembled from spare components left over from the development of QuikScat and ADEOS II.

The data it is gathering is building climate models and improving weather forecasts, including hurricane and typhoon monitoring.

RapidScat gathered surface wind speed and direction data on Soudelor this week when the storm was just west of Mariana Islands.

RapidScat measured the strongest sustained winds circling the center. Sustained winds at that time were near 135 knots (155 mph/250 kph).

The Joint Typhoon Warning Center forecast takes Soudelor on a west-northwesterly path near the Japanese island of Ishigakijima on August 7 and then over northern Taiwan before making landfall in southeastern China on August 8.

The storm is predicted to weaken as it continues on its trek to the west-northwest. Interests in the path of this Super typhoon should prepare for storm surge, heavy rainfall, mudslides in high terrain areas, and typhoon-force winds.

(Images via NASA and NOAA)