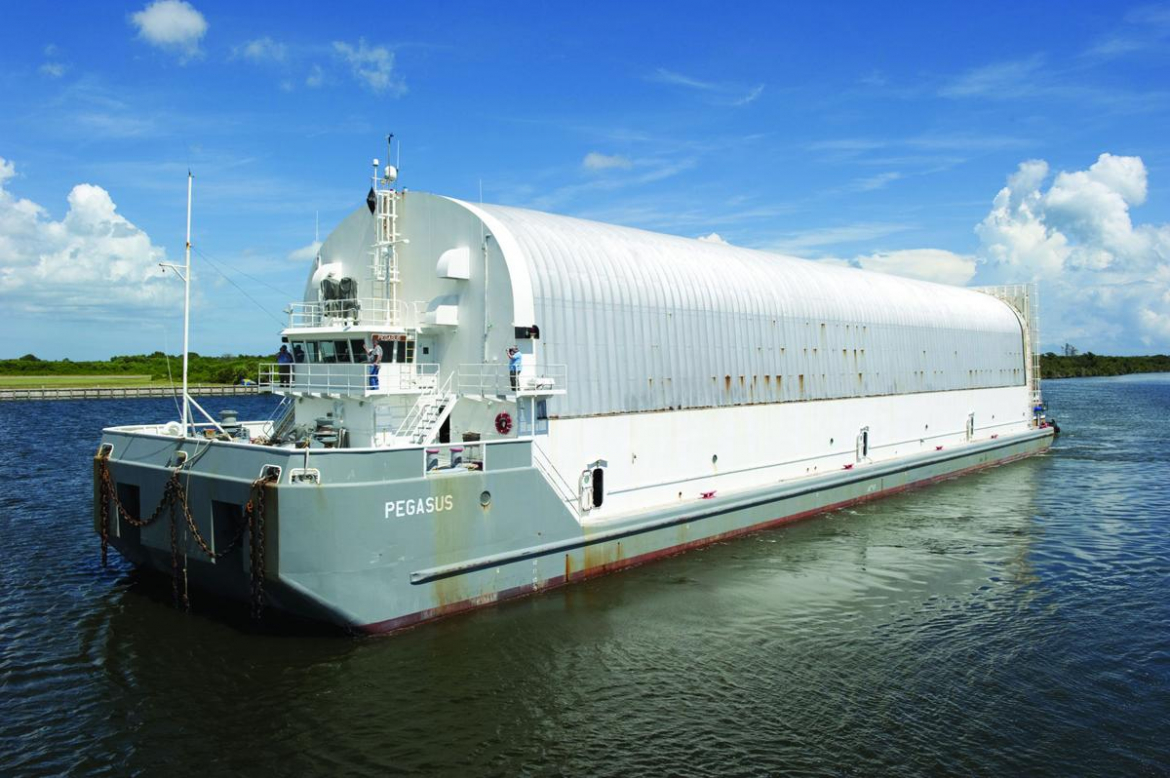 NASA’s veteran Pegasus barge – used to transport Space Shuttle External Tanks from Louisiana to Florida – has completed refit operations in Louisiana for its critical role in transporting the massive core stage of the new SLS rocket from its production facility in Louisiana to various NASA locations throughout the southern United States.

Completed in 1999, Pegasus was designed specifically for its role in transporting the giant External Tanks (ETs) for the Space Shuttle from the Michoud Assembly Facility (MAF) in Louisiana – where the tanks were built and assembled – to the Kennedy Space Center in Florida.

Pegasus itself was built in response to the ageing of NASA’s previous barges, Poseidon and Orion, which were built in in 1960s and first used to transport Saturn V and Saturn IB rocket stages. 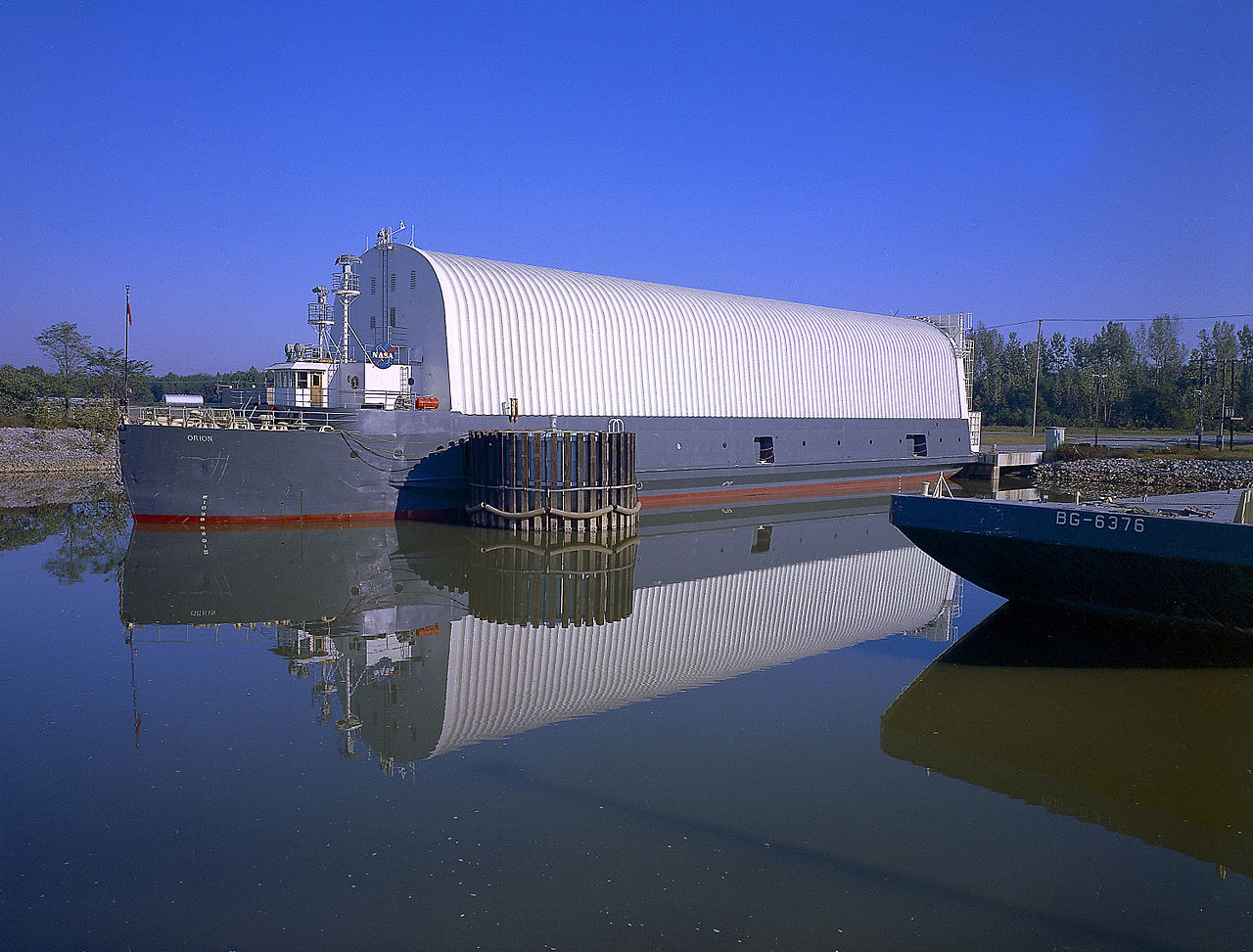 Following completion of the Apollo program in 1975, Poseidon and Orion were reconfigured then used from the 1970s to 1999 to transport ET hardware from MAF to the Marshal Space Flight Center and the Kennedy Space Center.

Following the tragic loss of Shuttle orbiter Columbia on STS-107, Pegasus additionally returned several ETs to MAF from Kennedy as part of the Shuttle Program’s Return To Flight process of upgrading and incorporating major modifications and safety upgrades to all ETs. 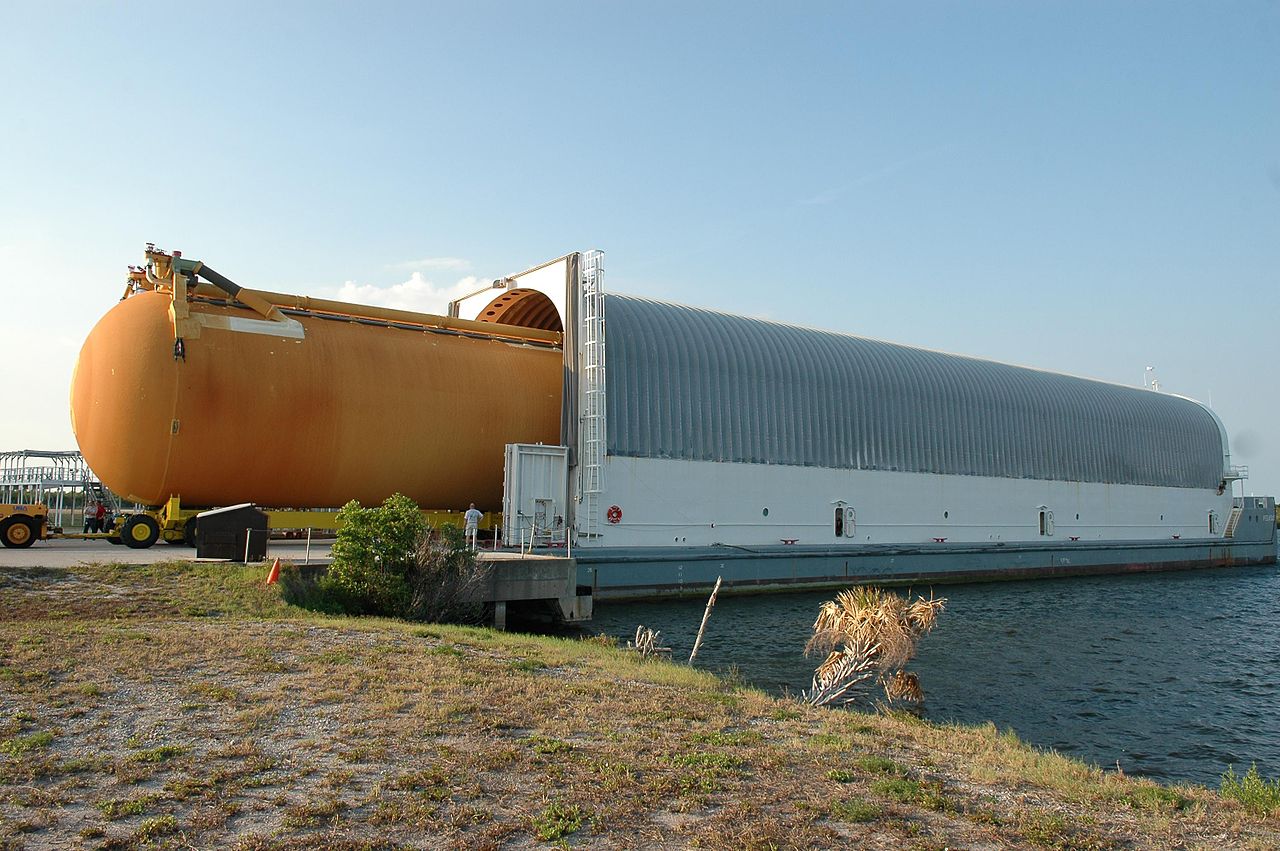 Pegasus offloading the external tank (ET) for STS-115 – via NASA

Following the completion of the Shuttle Program, Pegasus was used for the last time to transport Space Shuttle Main Engine (SSME) ground support equipment from Kennedy to the Stennis Space Center near Bay St. Louis, Mississippi.

From 2011 to 2014, Pegasus was mothballed at Stennis as work to design NASA’s new rocket, the Space Launch System (SLS), began.

With the SLS now deep into development and through several of its first critical design reviews, certain aspects of preparation for the inaugural SLS mission have become more prominent – specifically, the need to build Structural Test Articles (STAs) of the massive SLS core stage at MAF and transport the STAs to the Marshal Space Flight Center for verification testing. 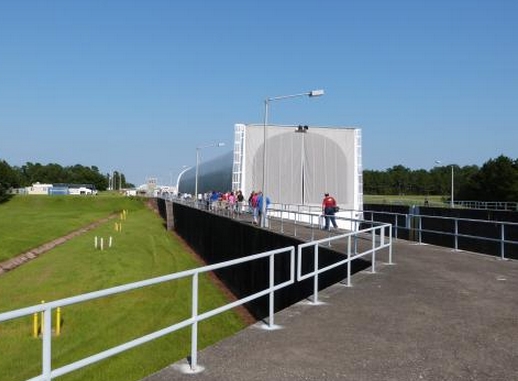 In short, Pegasus – as designed for Shuttle – was simply too small and lacking enough buoyancy to transport the SLS core.

To account for this mismatch, NASA contracted Conrad Shipyard LLC in Morgan City, Louisiana, in 2014 to perform an $8.5 million modification and refurbishment to Pegasus. 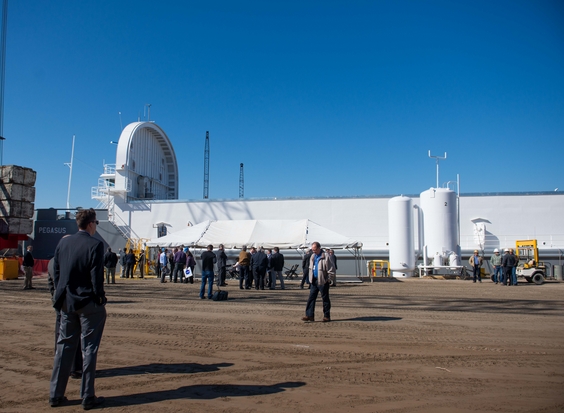 During the refit process, Pegasus was moved from Stennis to Amelia, Louisiana.

This new 165-foot section was specially designed for Pegasus to not only increase its length but also redefine its buoyancy to allow the barge to carry the extra 600,000 lbs needed to transport the SLS core stage. 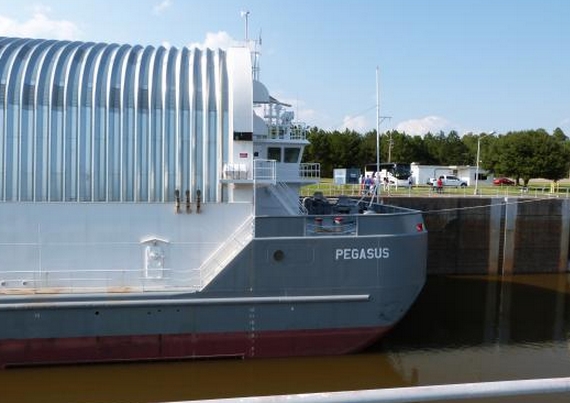 With the refit work complete, Pegasus’ new design meets all American Bureau of Shipping standards, including load line certification and verification of the legal loading limit to safely maintain buoyancy during water travel.

With Pegasus refits now complete, the first voyages for the newly refurbished barged will come in 2016 when Pegasus is used to carry the SLS core stage STAs from MAF to the Marshall Space Flight Center in Huntsville, Alabama. 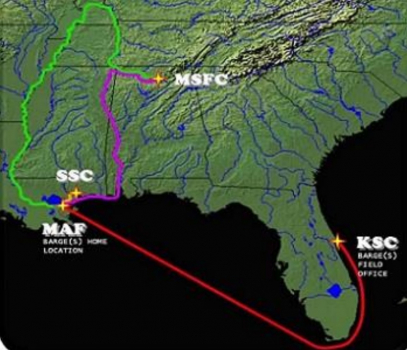 That trip will take approximately seven to 10 days and will involve traveling north, up the Mississippi River through Louisiana and then along the river’s length that forms part of borders of the states of Louisiana, Mississippi, Arkansas, Tennessee, Missouri, and Kentucky.

Once on the Mississippi River that forms the border between Missouri and Kentucky, Pegasus will arrive at the confluence of the Mississippi and Ohio Rivers, near the town of Wickliffe, Kentucky.

There, Pegasus will turn east, travelling the Ohio River for several miles along the Kentucky-Illinois border to the town of Paducah, Kentucky – where the Tennessee River branches off the Ohio River.

There, Pegasus will begin travelling back down south along the Tennessee River through Kentucky and Tennessee before finally entering Alabama just a few miles north north-west of the town of Waterloo, Alabama.

There, Pegasus will follow the Tennessee River east to Huntsville and the Marshal Space Flight Center. 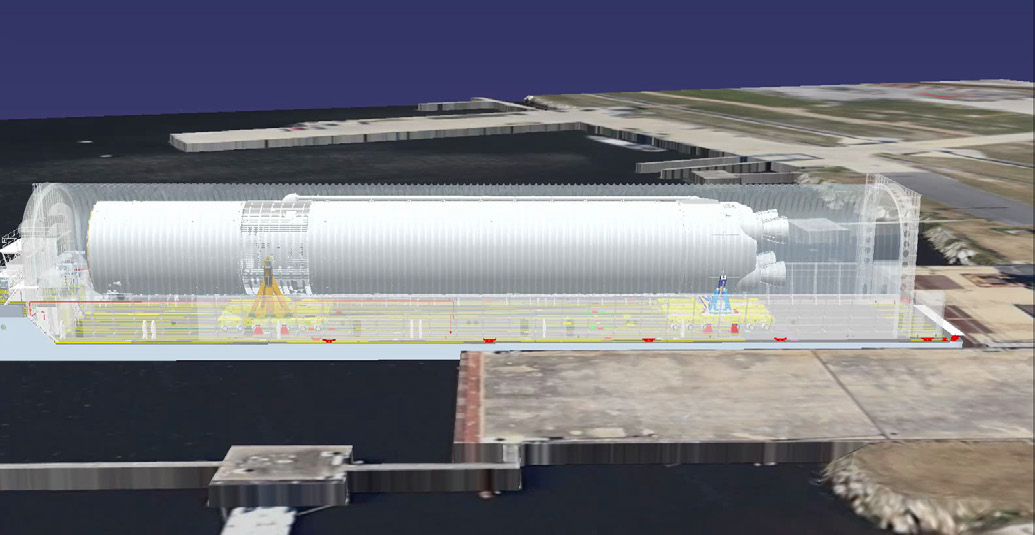 Rendering of the SLS core stage on Pegasus – via NASA

Once at Marshall, the STAs will be offloaded from Pegasus and undergo structural loads testing to validate that each piece of hardware can endure loads without any adverse effects to the vehicle, or most importantly, to the crew.

In the fall of 2017, Pegasus will then be called upon to take the first flight-ready SLS core stage from MAF to Stennis – a journey of one day – for final testing before the core is then taken to the Kennedy Space Center in early 2018.

Once at Kennedy, the SLS flight core stage will be mated to twin 5-segment Solid Rocket Boosters and integrated with the Orion capsule in the Vehicle Assembly Building for the debut mission of SLS – Exploration Mission 1 (EM-1) – set for 2018.