United Launch Alliance (ULA) has completed its first processing flow utilizing Off-site Vertical Integration (OVI) ahead of the upcoming Atlas V/MUOS-4 mission. The process involves several structural elements – and the Centaur upper stage – being integrated at the indoor Delta Operations Center (DOC) – as opposed to at the pad – potentially shaving a week off flow timelines.

United Launch Alliance are in the final days of the launch flow towards the lofting of the Mobile User Objective System-4 (MUOS-4) spacecraft from Cape Canaveral. 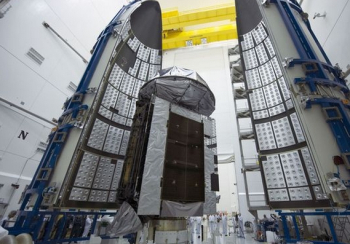 The MUOS constellation will consist of five satellites in total – the last of which is scheduled for launch in July 2016.

All five MUOS launches are making use of the United Launch Alliance Atlas V rocket, flying in her 551 configuration.

The largest and most powerful Atlas V to be developed, the 551 consists of a two stage core vehicle augmented at liftoff by five solid rocket motors, with a five meter payload fairing encapsulating the second stage and payload. 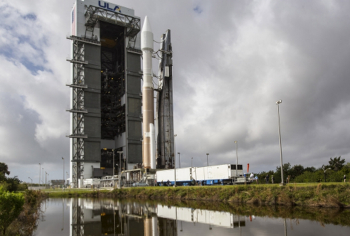 Integrating the various elements that make up the Atlas V involves a highly organized production and processing flow, ultimately resulting in the rocket standing tall at her Space Launch Complex -41 (SLC-41) pad at the Cape (or SLC-3E at Vandenberg).

Most of the on site integration takes place inside the Vertical Integration Facility (VIF) at the pad complex, prior to the completed rocket and payload being rolled out of the VIF for the short trip to the launch pad.

The addition of the OVI process reduces the amount of work that needs to take place inside of the VIF ahead of rollout – namely the integration of several structural elements and the Centaur upper stage for the Atlas V. 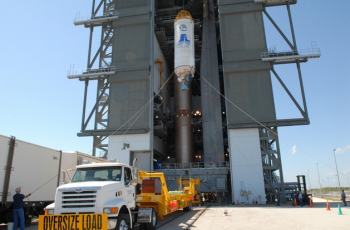 OVI also significantly reduces the number of lifting operations performed in the VIF, removing them from the critical path and allowing for reduced time between launches.

This process was demonstrated for the first time with the Atlas V flow ahead of the MUOS-4 launch.

Relocating these operations to the Delta Operations Center (DOC), an indoor facility, also mitigates the risk of weather-related processing delays, while also providing a safer working environment for employees.

ULA note that in the last six years there were 25 days of weather delays to launch vehicle stacking operations at the VIF. The move to utilize OVI could save a week in the processing flow.

“The associated one-week reduction in the launch-to-launch processing spans enables us to better meet the launch needs of our customers,” added Mr. Sponnick. 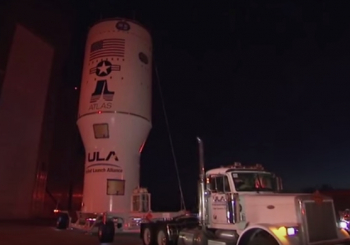 In preparation for bringing OVI online with an Atlas V flow, ULA developed a specialized flatbed transporter – towed by a truck – that could safely move the five-story stack of hardware approximately six miles from the DOC to the VIF.

The transporter includes a tank pressure control system for the Centaur upper stage.

The ULA Atlas V launch with MUOS-4 is currently scheduled to take place on August 31, with a launch window ranging from 6:07 to 6:51 am EDT.