Japan’s HTV-5 cargo vehicle has departed the International Space Station (ISS) on Monday ahead of a fiery plunge back to Earth. The spacecraft – which initially suffered from an ISS-related release failure – delivered vital supplies both for the crew and the Station itself during its mission, with its final role now involving a cargo of ISS trash that was disposed of during its destructive re-entry on Tuesday.

HTV-5 was launched to the ISS in mid-August, lofted by the H-IIB rocket from the Tanegashima Space Center in Southern Japan. 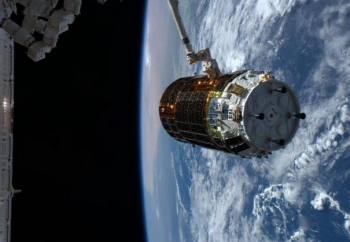 Following a successful arriving at the ISS, HTV-5’s eight rack bays – all of which were filled with HTV Resupply Racks (HRRs), delivered crucial supplies such as food, water, hygiene items, clothing, spare parts, personal items, and scientific experiments for the ISS crew.

Included in HTV-5’s manifest was 600 liters of potable water as well as food, crew commodities, system components, and science experiments – totaling one ton of unpressurized cargo.

Also aboard were various nanosatellites used for space research, known as CubeSats, including 14 Planet Labs Dove satellites, which will capture images of Earth for use in humanitarian, environmental and commercial applications.

HTV-5’s the primary external piece of equipment for this mission is the CALorimetric Electron Telescope (CALET).

CALET rode on the HTV’s Exposed Pallet (EP) and was transferred by the Kibo’s robotic arm (JEM Remote Manipulator System: JEMRMS) and installed to the Kibo’s Exposed Facility (EF).

With HTV-5’s cargo fully transferred – and trash items loaded into its place – the Common Berthing Mechanism (CBM) hatches between the vehicle and the ISS were closed, in preparation for HTV-5’s departure from the Station on Monday. 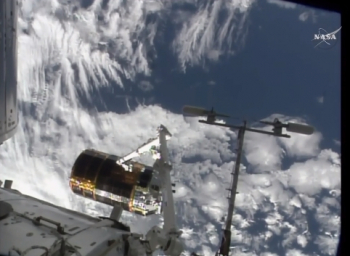 Following CBM vestibule depressurization and removal of all 16 CBM bolts (in four stages of four bolts).

Over the following few hours, the SSRMS manuvered HTV-5 to the release position around 30 feet below the ISS, following which, with both ISS and HTV-5 thrusters inhibited,

The SSRMS ungrappled of HTV-5 was next, to signify its release from the ISS.

However, the SSRMS noted a safing event, resulting in no release. It was believed to be an issue with the Robotic Work Station (RWS) in the Cupola module, resulting in the crew moving to the back up RWS in the Lab part of the Station. 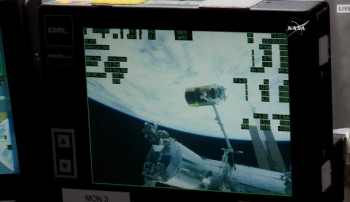 Cupola then showed it was back to working order, but the rest of the release window was expected to suffer from ratty comm, meaning a decision to move to the next window – one orbit later – was the best path forward, which also allowed for further evaluations into the original issue. 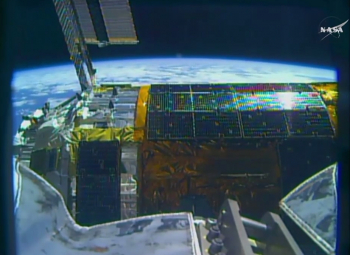 After a period of 90 seconds, the ISS crew sent the retreat command to HTV-5, which initiated the departure sequence burns. A few hours after its release, the cargo ship will fire its engines to begin a controlled deorbit and entry through Earth’s atmosphere, where it will burn up over the Pacific Ocean.

HTV-5 conducted a series of de-orbit burns for a destructive re-entry over the Pacific Ocean on Tuesday.

HTV-5’s scientific utility will continue even after its destruction however, since two re-entry payloads werer stowed inside HTV-5 to gather data to compare to computer models, in order to improve knowledge of re-entry characteristics.

This was the fifth mission of an HTV to the ISS, following in the footsteps of four HTVs having flown to the Station previously – HTV-1 from September-November 2009, HTV-2 from January-March 2011, HTV-3 from July-September 2012, and HTV-4 August-September 2013.