Expedition 44 commander Gennady Padalka – along with visiting crew members Andres Mogensen and Aidyn Aimbetov completed their journey home on the Soyuz TMA-16M spacecraft on Friday. Undocking from the International Space Station (ISS) occurred at 21:29 UTC, ahead of the trio touching down on the steppe of Kazakhstan at 00:51 UTC.

The return of the three crew members wrapped up 168 days in space for Padalka since launching from Kazakhstan in March.

His fellow passengers have enjoyed a much shorter ISS tour, with Mogensen and Aimbetov spending 10 days in space, arriving at the station September 4 with Sergey Volkov of Roscosmos.

The trio delivered a new Soyuz TMA-18M spacecraft that will return NASA astronaut Scott Kelly and Mikhail Kornienko of Roscosmos at the end of their one-year mission next year, along with Volkov. Soyuz TMA-18M will remain docked with the Space Station for 183 days, until 3 March 2016, serving as an emergency escape vehicle. 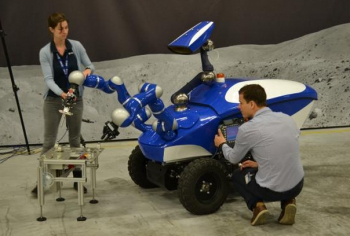 Despite the short duration mission for Aimbetov and Mogensen – the latter managed to achieve success with an experiment that will become a major part of humanity’s future exploration into deep space.

As part of ESA’s Meteron project, the astronaut drove two rovers on Earth via telerobotics.

The first as the INTERACT Rover (L2 Resources) – a  4×4 wheeled vehicle that combined a camera head on a neck system, a pair of highly advanced arms designed for remote force-feedback operation and a number of proximity and location sensors, including an arm laser to indicate depth close-up – was successfully controlled from the ISS. 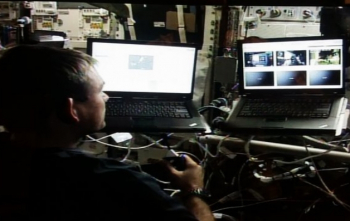 A second, car-sized rover was then controlled to repair a mockup lunar base in the Netherlands.

“He had never operated the rover before but its controls turned out to be very intuitive,” noted André Schiele, leading the experiment and ESA’s Telerobotics and Haptics Laboratory.

“Andreas took 45 minutes to reach the task board and then insert the pin on his first attempt, and less than 10 minutes on his follow-up attempt, showing a very steep learning curve.”

The tasks will aid further understanding into how telerobotics can take routine, highly repetitive, dangerous or long-duration tasks out of human hands, and improve and hasten human space exploration missions to new destinations.

In preparation for the trip home, the Soyuz TMA-16M crew donned their Sokol launch and entry suits, closed the hatch between the Orbital Module (BO) and Descent Module (SA), and strapped themselves into their Kazbek couches inside the SA. 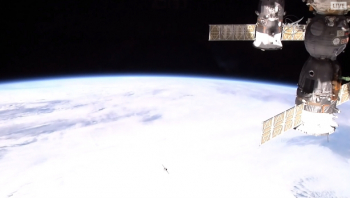 Following undocking, which occurred at 21:29 GMT, the Soyuz enjoyed a few hours of free flight as it departed from the Station’s neighborhood via two separation burns, as the crew completed the final leg of their 84 million mile journey.

The deorbit burn was the next key milestone of the return leg, completed around one hour ahead at around midnight UTC.

The burn took four minutes and 41 seconds to complete, reducing the Soyuz’s velocity just enough for it to begin the plunge back to Earth. 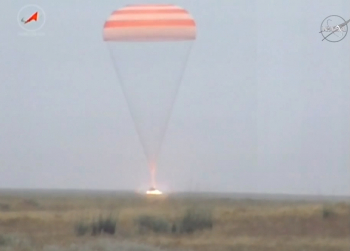 The Soyuz then completed the return to terra firma under parachute, landing southeast of Dzhezkazgan.

The timing of touchdown, under soft thruster engine firing, was dependent on a number of factors, finally occurring at 00:51 UTC on Saturday. It was just prior to sunrise on Saturday morning in Kazakhstan.

With landing, Padalka has logged a record 879 days in space on five flights, more than two months longer than cosmonaut Sergei Krikalev, the previous record holder. Padalka has now visited the ISS four times over his seven space missions. 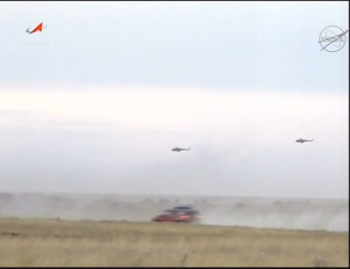 The next immediate task will involve the extraction of the crew from the SA by the Russian recovery forces that will race to the Soyuz’s aid.

The crew were transferred almost immediately on to special chairs, where medical checks were conducted, ahead of being moved to a medical tent by all terrain vehicles to prepare them for transit.

They were then loaded on to MI-8 helicopters and flown to a nearby airfield, where the crew parted ways.

At the time of undocking, Expedition 45 will formally begin aboard the station under Kelly’s command, along with crew mates Kornienko, NASA’s Kjell Lindgren, Russian cosmonauts Volkov and Oleg Kononenko and Kimiya Yui of the Japan Aerospace Exploration Agency.

Expedition 45 will continue research and operational support of the station as it passes through the 15th anniversary of a permanent human presence on the laboratory that will be marked on November 2.