The Soyuz TMA-18M spacecraft has docked with the International Space Station on Friday, following its Wednesday launch via a Soyuz FG rocket. Soyuz TMA-18M delivered one new Expedition crewmember to ISS – while the two TMA-18M Flight Engineers will return to Earth with Soyuz TMA-16M on 11 September – temporarily raising the crew size of the Station to nine.

Soyuz TMA-18M was an unusual flight to the ISS in that two of the three crewmembers launched aboard the Soyuz will not be staying at the Space Station for an extended duration mission. 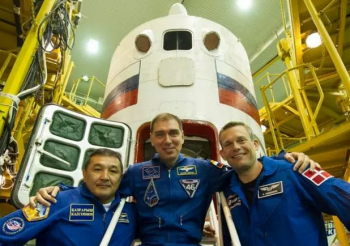 In fact, only Soyuz TMA-18M Commander, Sergey Volkov, will join five of the six astronauts/cosmonauts currently living and working on the Space Station when he exchanges places with Gennady Padalka on the ISS.

During those previous two flights, Volkov accumulated a total of 365 days 22 hours and 33 minutes in space.

Volkov will add another six months of time to that total as he remains on the ISS until early March 2016 – at which time he will return to Earth with Scott Kelly and Mikhail Korniyenko at the end of their Year In Space mission.

Joining Volkov on TMA-18M for the two remaining seats on the mission were Andreas Mogensen and Aidyn Aimbetov. 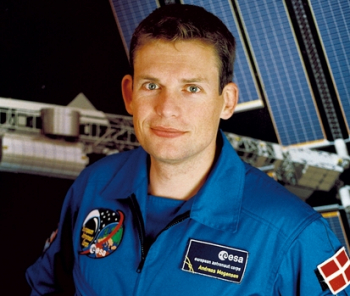 Andreas Mogensen, of the European Space Agency (ESA), is a 38 year old Dane from Copenhagen.

Selected as an ESA astronaut candidate in 2009 and officially becoming an ESA astronaut in November 2010, Mogensen is making his first trip to space on TMA-18M and became the first Dane in space when TMA-18M reached orbit Wednesday morning.

Mogensen previously served as an aquanaut for NASA’s NEEMO 19 mission in September 2014.

Unlike Volkov and a majority of recent Soyuz missions to ISS, Mogensen will not remain on the ISS for an Expedition.

Instead, he will return to Earth on Soyuz TMA-16M on 11 September 2015 (scheduled) with Expedition 44 Commander Gennady Padalka and fellow TMA-18M launch partner Aidyn Aimbetov. 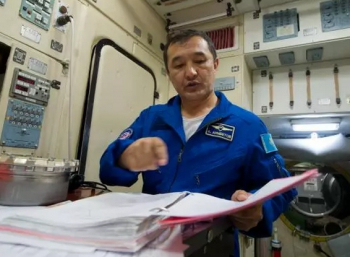 Aimbetov, a Kazakh cosmonaut, is a 43 year old native of Kolkhoz, Kazakhstan, and a Colonel in the Kazakh Air Force.

Aimbetov was selected to the first group of Kazakh cosmonauts in 2002 as one of only two selectees out of 2,000 applicants.

Originally scheduled to fly to the ISS in autumn 2009, the world financial crisis forced the cancellation of his mission.

Until June 2015, it was believed that Aimbetov would not fly until at least 2017. 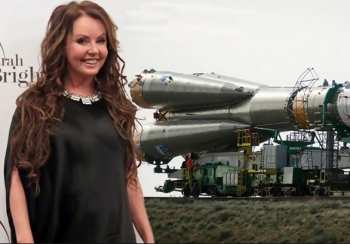 However, on 13 May 2015, Spaceflight Participant Sarah Brightman, from the United Kingdom, announced that she was withdrawing from the TMA-18M mission.

With Brightman’s withdrawal, her backup, Satoshi Takamatsu, became the prime crewmember for TMA-18M.

However, in short order, Takamatsu also withdrew his participation in the TMA-18M flight because the art projects he specifically wanted to work on in space would not be ready for the September 2015 launch date of TMA-18M.

This left an unprecedented open seat on a rapidly approaching Soyuz flight.

In June, Aimbetov was chosen to fill the prime crew seat on TMA-18M, with Sergey Prokopyev of Roscosmos serving as backup to Aimbetov.

Soyuz TMA-18M was to be tasked with achieving a fast-track, six-hour rendezvous with the ISS. However, that approach was cancelled due to the current altitude of the Station. 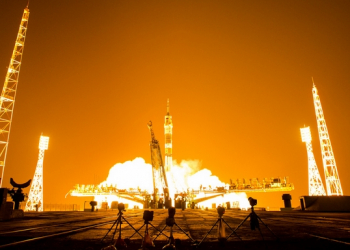 To achieve such a fast-track docking, Soyuz TMA-18M would have had to perform the first two pre-programmed engine burns during its very first orbit of Earth.

These burns will help place the Soyuz on the proper trajectory, with further burns, such as Dv3 and Dv4, available to correct booster performance discrepancies if needed.

Instead, the Soyuz utilized its more traditional two day rendezvous with the orbital outpost, ahead of entering the vicinity of the ISS for a docking with the station’s Poisk module docking port. 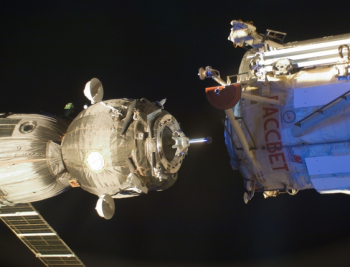 Following soft dock – at 08:39 GMT on Friday – the hooks and latches were driven to secure the Soyuz firmly to the ISS, known as hard dock.

Docking of TMA-18M signaled the conclusion of Expedition 44 and commencement of Expedition 45 — with command of the Station transferring from current Commander, Gennady Padalka, to incoming Commander Scott Kelly (who has been on the Station since March 2015).

Following standard leak checks, the hatches between Soyuz and ISS will be opened ahead of greetings with the Expedition 45 crew, which includes Commander Scott Kelly of NASA and Flight Engineers Mikhail Korniyenko and Oleg Kononenko of Roscosmos, Kimiya Yui of JAXA, and Kjell Lindgren of NASA. 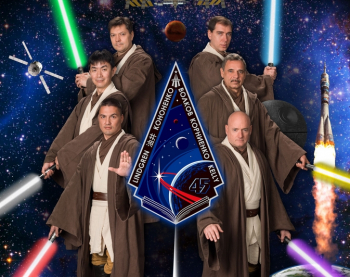 Kelly (fourth spaceflight) and Korniyenko (second spaceflight) are currently working through their one-year mission on the Station, in a milestone study to learn how long duration spaceflight impacts the human body and mind — a vital exercise ahead of the proposed long duration crewed missions into deep space.

Kononenko is making his third spaceflight, while Yui and Lindgren are currently shedding their rookie wings on their first spaceflight.

Expedition 45 will last until December 2015 with the departure of the Soyuz TMA-17M spacecraft from the Station with Kononenko, Yui, and Lindgren.

At that time, Kelly, Korniyenko, and Volkov will transfer to Expedition 46.

Soyuz TMA-18M will remain docked with the Space Station for 183 days, until 3 March 2016, serving as an emergency escape vehicle for Volkov, Kelly, and Korniyenko.

While the need for such an emergency egress from ISS is unlikely, TMA-18M will nonetheless serve in that capacity until March 2016, when it will be used to return Volkov as well as Kelly and Korniyenko to Earth.