United Launch Alliance has conducted its hundredth launch Friday with a rare commercial mission on behalf of Lockheed Martin to deploy Mexico’s Morelos-3 spacecraft. The launch, which made use of an Atlas V rocket flying out of Cape Canaveral, launched at the end a twenty-minute window that opened at 06:28 local time (10:28 UTC).

Formed in December 2006 by Boeing and Lockheed Martin to build and operate the companies’ respective Delta IV and Atlas V rockets United Launch Alliance (ULA) markets launch services to the US government under the Air Force’s Evolved Expendable Launch Vehicle (EELV) program and conducts commercial launches subcontracted to it by Boeing and Lockheed.

The company also inherited Boeing’s older Delta II vehicle which is in the process of being phased out with two scheduled launches remaining. 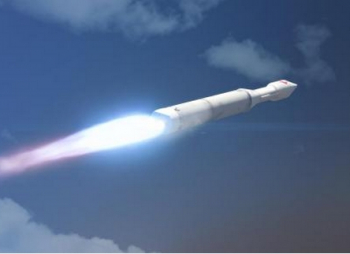 The impetus for Boeing and Lockheed Martin to merge their launch operations into ULA came as the result of a corporate espionage investigation into Boeing after they were discovered to have obtained sensitive information about Lockheed’s Atlas vehicle while competing against it with their Delta IV.

It was the Delta II – then the workhorse of the US space program – which conducted ULA’s first launch two weeks after the company’s formation.

Flying from Vandenberg Air Force Base the rocket successfully delivered a payload into low Earth orbit for the US National Reconnaissance Office (NRO).

This spacecraft, USA-193 or NROL-21, which was likely a prototype or demonstrator for the agency’s fleet of Topaz radar imaging satellites, failed immediately after launch and was subsequently destroyed by a US Navy SM-3 missile modified to act as an anti-satellite weapon. 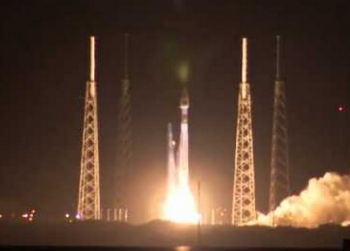 The organisation did not conduct a Delta IV launch until November 2007 when, flying in its Heavy configuration, the Delta orbited the final Defense Support Program (DSP) missile defence satellite for the US Air Force. Despite a successful launch, the satellite failed a few months after launch.

Including Friday’s launch, ULA has launched 49 Atlas V rockets and 51 Deltas – with the Delta launches breaking down into 28 flights for the venerable Delta II and 23 for the newer Delta IV. 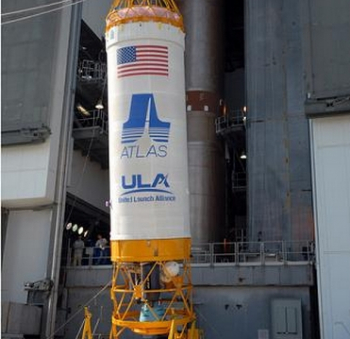 Of the ninety-nine missions completed before Friday, ninety-eight have been flown successfully with the sole anomaly being a partial failure on the June 2007 Atlas V launch that carried a pair of Intruder ocean surveillance satellites for the NRO.

A redesigned fuel valve on the rocket’s second stage did not operate as intended allowing fuel to leak from the stage during the mission’s coast phase, and as a result the rocket’s engines cut off slightly early at the end of their last burn in a lower orbit than had been intended. Utilising their own propulsion systems, the two satellites were able to raise themselves into their operational orbits.

Under United Launch Alliance, the Delta II has carried into orbit NASA’s THEMIS magnetospheric research constellation; the Phoenix mission to land on Mars, the Dawn mission to visit asteroid Vesta and dwarf planet Ceres and the GRAIL mission to the Moon. 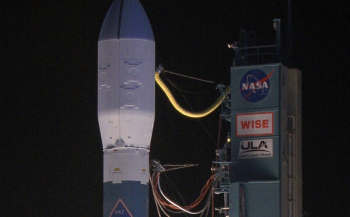 Other NASA spacecraft that have been launched on the older vehicle include the Fermi telescope (formerly known as the Gamma-ray Large Area Space Telescope or GLAST), the Kepler exoplanet observatory, the Wide-field Infrared Survey Explorer (WISE), the Orbiting Carbon Observatory 2 (OCO-2) and Soil Moisture Active/Passive (SMAP) environmental research missions.

Argentina’s SAC-D research spacecraft was launched by a Delta II in The rocket has also carried three spacecraft for the National Oceanic and Atmospheric Administration (NOAA); the NOAA-19 and NPP (later Suomi) weather satellites and the Jason-2 oceanography mission which was a joint venture between NOAA, Eumetsat and the French space agency CNES. 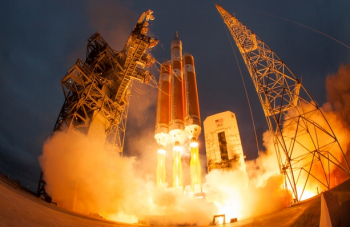 By contrast, Delta IV operations have been almost exclusively military – with the rocket’s only civilian outings under ULA being two pre-existing commercial delivery-in-orbit contracts for GOES weather satellites to the NOAA, and the launch of NASA’s Orion test mission, Exploration Flight Test 1 last year which could only be launched using the Delta IV Heavy. 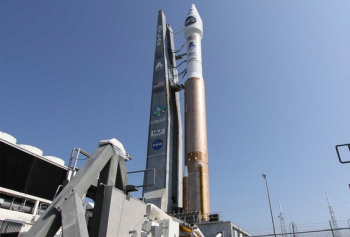 The Atlas V has had a more varied collection of payloads, including NASA’s Lunar Reconnaissance Orbiter and LCROSS probes to the Moon, the Solar Dynamics Observatory, the Juno mission to Jupiter, the Curiosity and MAVEN Mars probes, the Magnetospheric Multiscale mission (MMS), NASA’s TDRS communications satellites, a Landsat remote sensing mission and New Horizons.

The Atlas V is used for commercial launches infrequently; since United Launch Alliance have been operating the vehicle it has carried only the ICO G1 and Intelsat 14 communications satellites and the WorldView-3 imaging spacecraft. 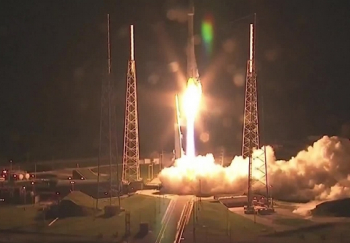 In addition two spacecraft – named PAN and CLIO – were launched for US Government customers under commercial contracts. The Morelos launch is the Atlas’ first fully commercial geosynchronous flight since the Intelsat deployment in November 2009. 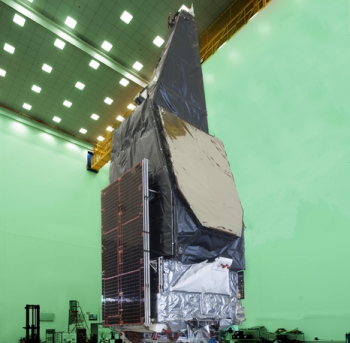 Also known as MEXSAT-2, Morelos-3 was constructed by Boeing and is based around the BSS-702HP GeoMobile platform. Using L and Ku-band transponders reflected through 22 and 2-metre (72 and 7-foot) antennae respectively to provide secure communications for the Mexican government, the satellite will serve both military and civilian applications.

With a mass of approximately 5,300 kilograms (11,700 lb), the spacecraft is designed to provide fifteen years of service. Power generation, of up to 14 kilowatts, will be provided by twin solar arrays each consisting of five panels of triple junction gallium arsenide cells.

Friday’s launch came four and a half months after Morelos-3’s sister craft, Centenario – or MEXSAT-1 – was lost in the failure of a Russian Proton-M/Briz-M vehicle.

A smaller third satellite, Bicentenario or MEXSAT-3, is already in orbit having been delivered by an Ariane 5 ECA vehicle in December 2012. The total cost of the MEXSAT program, including all three spacecraft, ground stations and terminals, was estimated at a billion US dollars when the contract was awarded in late 2010. 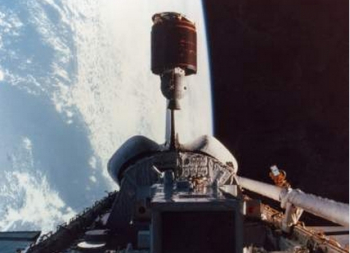 The name Morelos-3 carries on from two earlier Morelos satellites launched in 1985.

Both deployed by the Space Shuttle with the aid of a PAM-D kick motor, Morelos-1 was released from Discovery in June 1985 during STS-51G and Morelos-2 was placed into orbit by Atlantis at the end of November during STS-61B.

The satellite launched as SATMEX-5 in 1998 to replace Morelos-2 was originally to have been named Morelos-3, however it was renamed after Mexico’s satellite operations were privatised and ownership of the satellites transferred to the new SATMEX organisation. 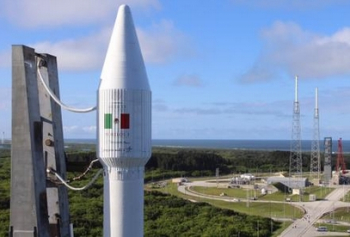 Morelos-3 was launched on the forty-seventh flight of the Atlas V rocket. Having first flown in 2002, the rocket was developed by Lockheed Martin and launches from the former Titan launch pad at Cape Canaveral’s Space Launch Complex 41.

Rockets are assembled vertically away from the pad in the nearby Vertical Integration Facility (VIF) before being rolled out to the pad – atop a mobile launch platform – usually a day before liftoff.

The rocket that flew on Friday had tail number AV-059 and was operating in the Atlas’ 421 configuration. This consists of a Common Core Booster first stage powered by a single RD-180 engine, a single-engine Centaur upper stage powered by an RL10, and two Aerojet AJ-60A solid rocket motors augmenting the first stage during the early stages of flight. 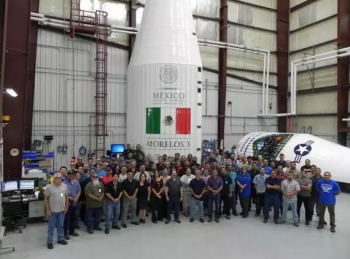 The payload is encapsulated in a payload fairing with a diameter of four metres (13 feet); for Friday’s mission an Extra-Extended Payload Fairing (XPF) was used, the longest of the three available four-metre fairings.

Following the countdown, the launch of AV-059 began with the rocket igniting its RD-180 first stage engine 2.7 seconds ahead of the scheduled launch time.

This built up thrust in preparation for booster ignition and liftoff, with the rocket beginning to ascend once the thrust from its first stage and boosters exceeded the mass of the fully-fuelled vehicle – at approximately the T+1.1 second mark.

After clearing the tower, the Atlas began a series of pitch and yaw manoeuvres about 5.8 seconds after liftoff to place it onto course for a south-westerly climb over the Atlantic Ocean. 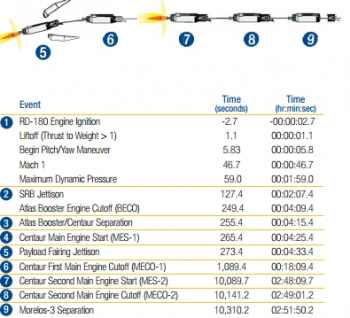 At 46.7 seconds elapsed time AV-059 reached a speed of Mach 1, followed 12.3 seconds later by the rocket passing through the area of maximum dynamic pressure.

The solid rocket motors burnt out around ninety seconds after ignition, remaining attached until 127.4 seconds into the flight due to aerodynamic concerns regarding separation at too low an altitude. 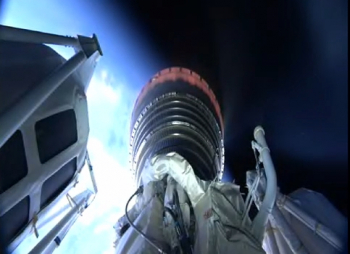 The first burn of the Centaur’s engine lasted thirteen minutes and 36 seconds, establishing an initial parking and transfer orbit.

Following a coast phase lasting three tenths of a second more than two and a half hours, the RL10 will restart to raise the perigee of the orbit, reducing the satellite’s necessary fuel consumption to reach its final orbit. Lasting 51.5 seconds, this burn will conclude AV-059’s powered flight. Spacecraft separation is expected to occur two minutes and 49 seconds after its completion. 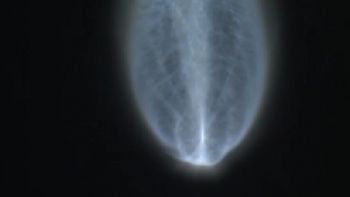 Friday’s launch was the sixth Atlas V launch of the year, occurring a month after the previous mission successfully orbited a MUOS communications satellite, and less than a week before the next scheduled launch that will see an Atlas carry an NRO payload – believed to be a pair of Intruder ocean surveillance satellites – into orbit.

Another Atlas V launch from Cape Canaveral, with a GPS satellite, is currently scheduled for the end of the month although this may slip into November. Beyond that, one further Atlas launch is scheduled for later this year which is expected to carry Orbital Sciences’ Cygnus spacecraft to resupply the International Space Station.

Remembering Sputnik – The satellite that began the Space Race