Making its second flight in less than a week, United Launch Alliance’s Atlas V rocket has successfully deployed a National Reconnaissance Office primary payload (NROL-55) – and a host of smaller satellites – Thursday following a pre-dawn liftoff from Vandenberg Air Force Base. Liftoff was on schedule at 05:49 Pacific Daylight Time (12:49 UTC).

This previously stood at 7 days and three hours between launches in April last year; the first of which carried a DMSP weather satellite from Vandenberg while the second flew from Cape Canaveral with an NRO payload. 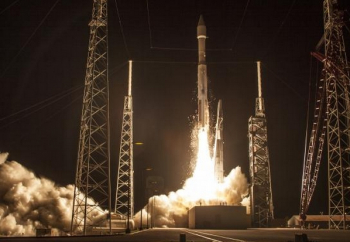 While the nature of this payload is classified, as is usual for NRO missions, much can be inferred from the configuration of the rocket carrying the payload and airspace closures and hazard areas which give away the course that the rocket will take. 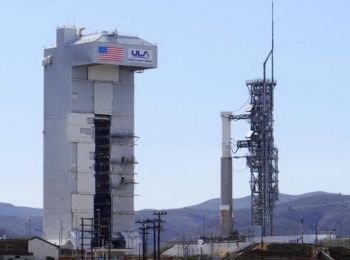 In the case of NROL-55, the Atlas V – tail number AV-058 – flew in its 401 configuration, which consists of a Common Core Booster first stage, a single-engine Centaur second stage, no attached solid rocket motors and a payload fairing with a diameter of four metres.

This configuration has been used to launch two types of NRO spacecraft – a constellation of communications satellites known as the Satellite Data System (SDS) or Quasar; and ocean reconnaissance spacecraft known as the Naval Ocean Surveillance System (NOSS), or Intruder. 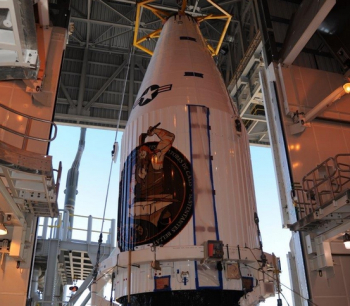 The Extended Payload Fairing was introduced with the Atlas II, and adds an additional section to the cylindrical part of the fairing, increasing its length by 90 centimetres (3 feet). The Extra-Extended fairing, which was developed for the Atlas V, adds a second 90-centimetre segment.

The Naval Ocean Surveillance System (NOSS) is a signals intelligence (SIGINT) program which uses satellites to triangulate the position of ships at sea from their radio transmissions. For this purpose NOSS spacecraft were originally launched in groups of three; first-generation spacecraft were launched on Atlas E/F and H rockets, with the second-generation constellation being deployed by the larger Titan IV. 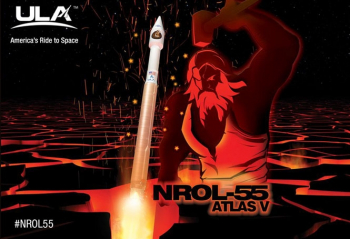 Codenamed Intruder – in the past the codenames White Cloud, Parcae and Ranger have also been associated with the program – NOSS is now in its third or fourth generation, with each group of satellites now requiring only two vehicles.

The first NOSS launch took place in April 1976, with an Atlas E/F deploying three satellites using a Multiple Satellite Dispenser (MSD), which served as both an upper stage and a multiple-payload attachment mechanism. Further launches in December 1977 and March 1980 brought the constellation up to three clusters of three satellites, before a December 1980 failure resulted in the loss of the fourth cluster of satellites.

Launches resumed in 1983, using the Atlas H rocket. Two launches occurred in 1983, with further deployments in 1984, 1986 and 1987 – all of which carried three NOSS satellites. The names Parcae and White Cloud seem to be associated more with these first-generation satellites; Intruder being more associated with the second and third generation spacecraft and Ranger exclusively with the second generation.

Four trios of second-generation satellites were launched aboard Titan IVA rockets in 1990, 1991, 1993 and 1996. The first launch took place from Cape Canaveral using a Titan IV(405)A vehicle while the remaining three flew from Vandenberg atop Titan IV(403)A rockets. The 1993 launch failed to achieve orbit after one of the Titan IV’s solid rocket motors malfunctioned about 100 seconds into the flight, causing the vehicle to explode.

Four pairs of third-generation Intruder satellites were launched between 2001 and 2007, replacing the earlier three-satellite groups. These spacecraft appear to have a lifespan of approximately ten years, with the first two pairs being replaced by satellites deployed in 2011 and 2012 respectively. NROL-55 is, therefore, likely to replace the third pair of these with another launch in a few years’ time replacing the spacecraft that launched in 2007.

That said the fourth pair of satellites, launched in 2007, had to perform a series of unscheduled orbit corrections after being deployed into a lower than planned orbit and it remains to be seen what effect – if any – this will have had on their lifespan.

The third pair of third-generation Intruder satellites, designated USA-181, were launched in February 2005 aboard the final flight of the short-lived Atlas III rocket. The mission, designated NROL-23, also marked the last launch of an Atlas rocket from Space Launch Complex 36 at Cape Canaveral, with the Atlas V using Space Launch Complex 41 instead.

From the fourth pair onwards, Intruder has used the Atlas V, typically flying in the 401 configuration as it will be on Thursday. The exception to this was 2011’s launch of NROL-34, which used the more powerful 411 configuration.

It has been speculated that this was to allow the launch to be completed with a single engine burn of the Centaur upper stage, eliminating the extended coast phase required when the satellites are deployed by the 401 variant, due to a lack of confidence in the Centaur after the 2007 failure. The 401 configuration was used again for 2012’s launch of NROL-36. 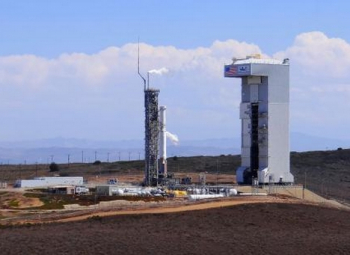 Originally part of the US Navy’s Point Arguello launch site which merged with the adjacent Vandenberg Air Force Base in 1964, Point Arguello Launch Complex 1-2, which would later become SLC-3E, saw its first launch in 1961 with an Atlas-Agena carrying a MIDAS missile defence satellite into orbit. The final Atlas-Agena launch from the pad occurred in 1966, the same year that the complex gained its current name.

Following the end of Atlas-Agena flights from SLC-3E, the pad was used for three suborbital Atlas launches carrying X-23A vehicles that were being used to study atmospheric reentry. In 1968, the pad also supported an orbital launch using an Atlas booster and a Star-37 upper stage, which failed to achieve orbit. 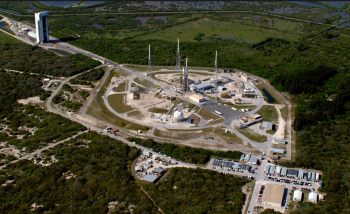 This would be the last launch from SLC-3E for nearly a decade before the pad was reactivated in 1978 for use by the Atlas E/F vehicle. A program to provide low-cost military launch capacity by constructing rockets from parts of leftover Atlas-E and Atlas-F missiles, the Atlas-E/F made seven launches from Space Launch Complex 3E carrying prototype GPS satellites.

The pad was then converted for the Atlas-H, which flew all five of its missions from SLC-3E between 1983 and 1987, all carrying first-generation NOSS satellites.

After the final Atlas-H launch, SLC-3E was not used again until 1999 when the first of three Atlas IIAS launches from the pad carried NASA’s Terra satellite.

After the two NOSS launches in 2001 and 2003 use if the pad was to have been discontinued, with the Atlas II being retired and Lockheed Martin having no plans to launch the Atlas V from Vandenberg. This changed after Lockheed were awarded several launches forfeited by Boeing after the latter was found to have illegally obtained information on Lockheed’s Atlas V development program. 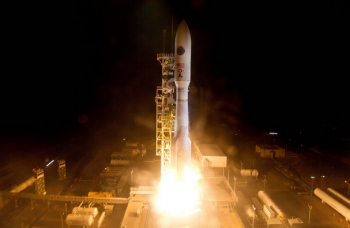 The Atlas II pad was converted and the first Atlas V launched from Vandenberg in March 2008 carrying an electronic intelligence (ELINT) satellite for the NRO.

Details of the mission profile or flightplan for Thursday’s launch were not revealed – however, a fairly typical two-burn ascent to low Earth orbit can be expected.

The first stage – or Common Core Booster – ignited its RD-180 engine 2.7 seconds before the countdown reaches zero, with the rocket lifting off at about T+1.1 seconds. Rolling to a southeasterly heading along the coast of California – as indicated by the launch hazard areas – AV-058 pitched over for her climb into orbit. 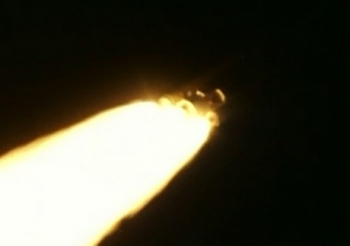 A little over a minute into the flight the RD-180 engine throttled down as the vehicle passes through the area of maximum dynamic pressure, or Max-Q. After navigating this period of flight the engine again throttled up to continue its burn.

First stage powered flight lasted a little over four minutes, with the RD-180 again throttling down a few seconds before cutoff to limit the rocket’s acceleration.

The Centaur second stage separated from the spent Atlas booster about six seconds after cutoff, with the stage’s RL10 engine igniting ten seconds later and the payload fairing separating from the nose of the rocket after a further fifteen seconds. Due to the nature of the mission, live coverage ended at this point of the launch. 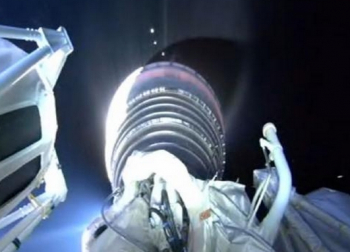 Most Centaur stages are now powered by RL10C-1 engines, a new version of the RL10 which was introduced late last year; however, there have been occasional launches that have made use of the older RL10A-4-2. ULA has not announced which engine will be used on Thursday’s mission.

The first RL10 burn lasted about fourteen and a half minutes, establishing an initial parking and transfer orbit. Following an hour-long coast phase, Centaur restarted for a second burn of around 60 seconds that will circularise the orbit. Spacecraft separation occurred two minutes after the second burn concludes, based on estimates, with the two NOSS satellites remaining attached to each other at the point of separation from the Atlas, before dividing to begin their mission.

Following deployment of its primary payload – which required an orbit of approximately 1,000 by 1,200 kilometres (620 by 750 miles; 540 by 650 nautical miles) at an inclination of 63.4 degrees, the Centaur manoeuvred to deploy its secondary payloads.

Three of the spacecraft are three-unit CubeSats being carried as part of the US Army’s SMDC Nanosatellite Program, or SNaP. The SNaP-3 mission, which consists of spacecraft named Alice, Eddie and Jimi, will be used for communications experiments. 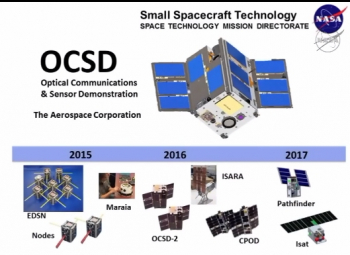 The Aerospace Company’s 1.5-unit AeroCube-5C spacecraft will be used for communications and tracking testing. It follows two previous AeroCube-5 satellites launched in December 2013 as part of the GEMSat mission.

The Optical Communications and Sensor Demonstration A (OCSD-A) satellite, also known as AeroCube 7A, is the first member of a three-satellite constellation that will be used to demonstrate laser communications in orbit.

A pair of two-unit SINOD satellites; SINOD-D1 and D3; are were carried on the launch for SRI International. These spacecraft will be used for communications experiments while a pair of single-unit PropCube spacecraft – PropCube 1 and PropCube 3 – will accompany them to take measurements of the ionosphere to assist with assist with calibration.

NASA has funded the launch of four educational research satellites along with GRACE, under its Educational Launch of Nanosatellites (ELaNa) program. 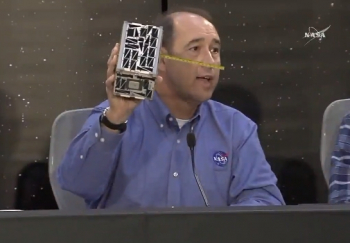 Designated ELaNa XII, the payloads consist of Alaska Research CubeSat 1 (ARC-1) for the University of Alaska; BisonSat for Salish Kootenai College on Flathead Reservation, Montana; the Low Mass Radio Science Transponder (LMRST-Sat) for the Jet Propulsion Laboratory and Fox-1A for AMSAT. LMRST-Sat is a three-unit CubeSat while the other NASA-sponsored payloads are all single-unit spacecraft.

ARC-1 will be used to study the conditions the satellite encounters as it ascends towards orbit, in terms of the satellite’s temperature and the vibration encountered. Once in orbit the satellite will test attitude control and communications system, using a camera to image Earth’s icecaps in order to provide data for communications tests. 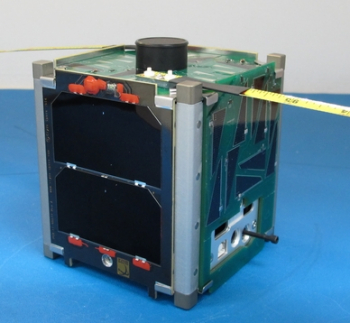 BisonSat, or Nwist Q̓ʷiq̓ʷáy – meaning “Buffalo Up Above” in Salish, will be used for Earth imaging, land classification and studies of clouds. LMRST-Sat will test a low-mass radio system intended for use on future deep space missions to accomplish science objectives.

Fox-1A is an amateur radio satellite, also carrying a physics research experiment and a gyroscope experiment for Penn State University.

Thursday’s launch was the sixty-first of 2015, the seventh of the year for the Atlas V and the tenth for United Launch Alliance. All of ULA’s remaining launches this year will use Atlas V vehicles, with the next expected at the end of the month carrying a GPS satellite out of Cape Canaveral.

The only other Atlas launch remaining this year is currently scheduled for early December, with Orbital Sciences’ Cygnus spacecraft on a resupply mission to the International Space Station.

The NRO’s next launch is expected next February, with NROL-45 flying atop a Delta IV Medium+(5,2) from Vandenberg. This is likely to carry a Topaz radar imaging satellite.