Arianespace has conducted its sixth Ariane 5 mission of the year with the launch of two more telecommunication satellites. Arabsat-6B and GSAT-15 rode uphill on the European workhorse, with the launch taking place on schedule at 21:34 UTC from the European Spaceport in Kourou on Tuesday.

This latest mission was designated Flight VA227 in Arianespace’s launcher family numbering system and was the 227th Ariane mission since this series of vehicles entered operation in 1979.

Launching at the start of a 43-minute launch window, the Ariane 5 mission had a total payload lift performance of 9,810 kg.

This included the two satellites’ mass at liftoff – 5,798 kg. for Arabsat-6B and 3,164 kg. for GSAT-15 – along with launcher integration hardware and Ariane 5’s dual-passenger deployment system, SLYDA.

Arabsat-6B, to be renamed BADR-7 once in orbit, was the ninth satellite orbited by Arianespace for use by the operator Arabsat, based in Riyadh, Saudi Arabia. 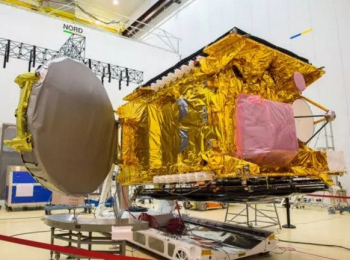 It is the initial sixth-generation satellite for Arabsat’s fleet, providing broadcast, broadband and telecommunications services over the Middle East, Africa and Central Asia.

The spacecraft was launched on behalf of Airbus Defence and Space and Thales Alenia Space as part of their turnkey contract with Arabsat.

This satellite rode in the upper passenger position and was deployed first during the mission.

GSAT-15 is designed to deliver telecommunications services, along with dedicated navigation-aid and emergency services, for India.  Built by the Indian Space Research Organisation (ISRO), it will be the 19th payload launched by Arianespace for this customer. 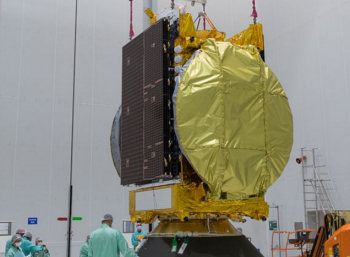 GSAT-15, India’s latest Communication satellite, is a high power satellite being inducted into the INSAT/GSAT system.

GSAT-15 carries a total of 24 communication transponders in Ku-band as well as a GPS Aided GEO Augmented Navigation (GAGAN) payload operating in L1 and L5 bands.

This is the third satellite to carry GAGAN payload after GSAT-8 and GSAT-10, which are already providing navigation services from orbit. GSAT-15 carries a Ku-band beacon as well to help in accurately pointing ground antennas towards the satellite.

Arianespace remains on track for a record 12 launches in 2015, using the heavy-lift Ariane 5, medium-lift Soyuz and lightweight Vega. Flight VA227 will be the sixth Ariane 5 mission this year, which was accompanied by two launches each with Soyuz and Vega.

(Images via Arianespace and ISRO).