The goal of reusing rocket stages – a major enabler for the reduction of costs associated with launches – landed another milestone this week when Blue Origin conducted the second successful test flight of its New Shepard rocket, rising to 330,000 feet, prior to nailing a propulsive landing of the booster which will allow for it to be reused.

Several major space flight companies are pushing through various stages of embedding reusability into their rocket systems, throwing away the days of old where booster stages only had a watery grave to look forward to after launch. 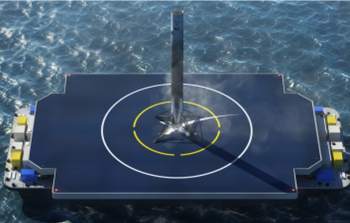 Some of the plans being worked are more challenging than Blue Origin’s goals, with Jeff Bezos’ company working in the suborbital realm, while SpaceX and ULA are aiming to return stages and hardware after being tasked with the opening push for spacecraft destined to travel in Low Earth Orbit and beyond.

Indeed, the notion of returning rockets back to base goes back many years.

The latest drive is being led by SpaceX, with numerous successes with its test program and close attempts at landing a Falcon 9 core stage on to a landing pad stationed in the Atlantic.

The next attempt will come next month during the ORBCOMM-2 mission, with returns to a pad on its coastal site scheduled for next year. It is also envisioned SpaceX will return three stages in one mission when Falcon Heavy begins her missions in 2016.

However, every success is another step towards a future where rockets not only launch, but land in anticipation of being cleaned, refurbished and refueled for a future launch – massively reducing the cost when compared to building new first stages for every mission. 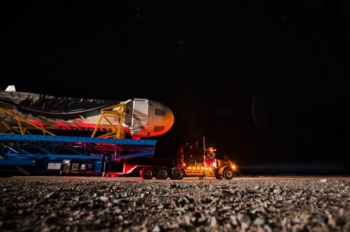 New Shepard conducted its first test flight in April, enjoying a successful launch, but failed to conduct a landing of the booster.

“If New Shepard had been a traditional expendable vehicle, this would have been a flawless first test flight,” noted Mr. Bezos at the time. “Of course one of our goals is reusability, and unfortunately we didn’t get to recover the propulsion module because we lost pressure in our hydraulic system on descent.

“Fortunately, we’ve already been in work for some time on an improved hydraulic system. Also, assembly of propulsion module serial numbers 2 and 3 is already underway – we’ll be ready to fly again soon.” 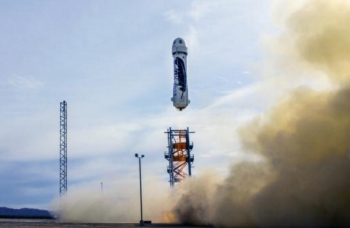 That second flight occurred on Monday, once again without any media notice – as is traditional for Blue Origin – prior to being confirmed nearly a day later via a heavily produced highlight video – likely due to its target audience, which is space tourism.

The video still provided key items of interest for hardcore rocket fans, as the rocket launched at 11:21 am Central Time on Monday from its West Texas launch site.

It successfully achieved an apogee of 329,839 feet (100.5 kilometers) for the crew capsule, racing uphill to a velocity of Mach 3.72, ahead of the capsule once again making a successful return to land.

However, all eyes were on the booster, which began its controlled return to the surface. 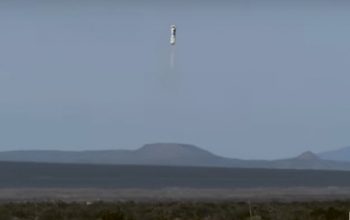 Blue Origin provided some data on the events, with re-ignition of booster’s BE-3 engine occurring at 4,896 feet above ground level.

The variable-thrust engine did well to control the stability of the descent, as seen in the video, as its plume danced around to keep the booster on track.

Increasing its thrust as it saw the ground, the controlled vertical landing of the booster was clocked at a comfortable 4.4 mph, as the stage landed upright on its deployed legs. 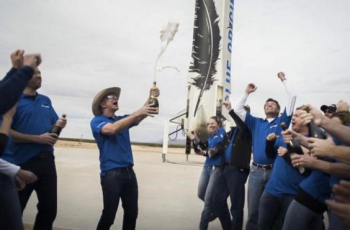 The rocket was greeted by overjoyed engineers, spraying champagne near the booster to celebrate the success. However, the booster won’t be able to rest for long.

“Now safely tucked away at our launch site in West Texas is the rarest of beasts – a used rocket,” noted Mr. Bezos on Tuesday.

“Blue Origin’s reusable New Shepard space vehicle flew a flawless mission – soaring to 329,839 feet and then returning through 119-mph high-altitude crosswinds to make a gentle, controlled landing just four and a half feet from the center of the pad.

“Full reuse is a game changer, and we can’t wait to fuel up and fly again.” 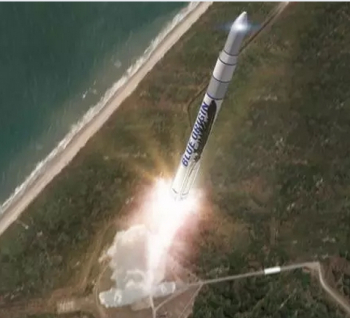 While preparations are made for that reuse flight, Blue Origin has also begun designing New Shepard’s sibling, her “Very Big Brother” – an orbital launch vehicle that is many times New Shepard’s size and is powered by the 550,000-lbf thrust liquefied natural gas, liquid oxygen BE-4 engine.

That rocket was shown via the agreement to take over the historic Launch Complex 36 (LC-36) at Cape Canaveral. Blue Origin will be creating over 300 jobs at its East Coast home base for production and launches.

Yet the long term ambitions of Mr. Bezos relates to launching a large amount of people into space, millions per his claim on CBS’ Morning Show on Tuesday.

“Our long term vision is millions of people living and working in space, helping explore the solar system. That’s what we’re working on and reusability is a game changer for that.”

SpaceX, the leader in the reusability drive, also has plans to loft large numbers of people to space, although its long term plans is for colonization, specifically on Mars, via its Mars Colonial Transporter (MCT) system, which will also be heavily based on reusable technology via plans set to be announced next year.