United Launch Alliance (ULA) will begin adding a cubesat dispenser on to its Atlas V missions from 2017, allowing for the launch of up to 24 cubesats alongside its primary mission payload. In advertising the opportunities to cubesat companies, ULA has announced it will allow for several free rides for University payloads.

The cubesat market is growing, with numerous small satellites being developed and already launched via a variety of launch vehicles.

ULA are tapping into this market by allocating the use of available performance and volume margin that would otherwise go unused by its rockets.

Rideshare is aimed at offering a range of capabilities that can be used to launch auxiliary, secondary, and dual-manifest payloads to all orbits aboard its Atlas and Delta family of launch vehicles. 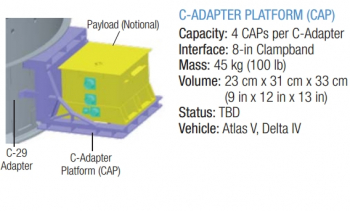 The dispenser options have been shown in ULA materials, with the “C-ADAPTER PLATFORM (CAP)” one such option. It consists of four CAPs per C-Adapter, with an interface clampband. The extra hardware only has a mass of 100 lbs and can work on both the Atlas V and Delta IV rockets.

Although hitching a ride with a primary passenger is much cheaper than having to hire your own rocket, it is still a large amount of expense for some sectors, such as universities, to allow for a viable project.

ULA are looking to help some of the universities by offering  a new, innovative program offering the chance to compete for free CubeSat rides on future launches.

“ULA will offer universities the chance to compete for at least six CubeSat launch slots on two Atlas V missions, with a goal to eventually add university CubeSat slots to nearly every Atlas and Vulcan launch,” noted Tory Bruno, ULA president and CEO.

“There is a growing need for universities to have access and availability to launch their CubeSats and this program will transform the way these universities get to space by making space more affordable and accessible.” 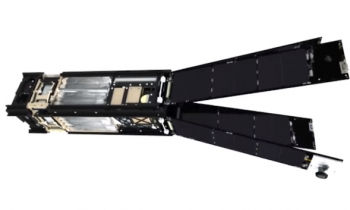 ULA has launched 55 cubesats during its 102 missions.

One university – which is fittingly local to ULA’s HQ – has already been confirmed as winning a free ride on an Atlas V launch in 2017.

“Since its inception, ULA has been committed to science, technology, engineering and math (STEM) education initiatives and programs such as this help to motivate, educate and develop our next generation of rocket scientists and space entrepreneurs,” added Mr. Bruno. 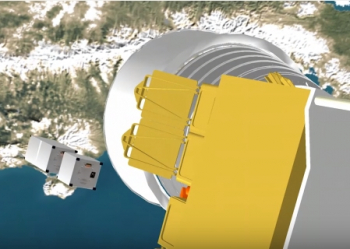 Other universities have been told to contact ULA to enter consideration for a free launch slot by December 18, 2015.

In early 2016, ULA will release a request for proposal (RFP) for the first competitive CubeSat launch slots. The selected universities will be announced in August 2016. In addition, ULA is offering the nation’s universities the chance to help name the new CubeSat program.

Winning universities will join the University of Colorado Boulder, who were understandable happy with the award that will build on their history with the Altas V having previously been involved in a 2012 mission.

“CU-Boulder students have been building and operating small satellites for 20 years, including the Colorado Student Space Weather CubeSat launched on a ULA Atlas rocket in 2012,” Mr. DiStefano noted.

“The ability to provide science and engineering students with the opportunity to fly the satellites they build is an invaluable motivational and educational tool. We are thrilled to partner with ULA, a visionary organization that is helping to facilitate a nationwide STEM effort.”